The long-awaited Netflix take on the Gorgeous Ladies of Wrestling premieres Friday and whether you’re a wrestling fan or not, it’s worth checking out.

Given the subject matter — the intentionally campy, cornball, and titillating Gorgeous Ladies of Wrestling series of the late 1980s — it would have been easy for the producers of GLOW to take the low road and put out a series that depicts pro wrestling (and, more specifically, women’s wrestling) in a less-than-flattering light.

Instead, series creators Liz Flahive and Carly Mensch treat wrestling, and the men and women who step inside the ring, in a respectful manner, which is refreshing to see. 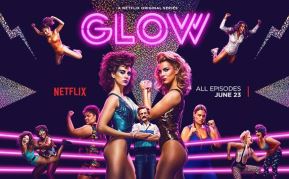 Comedian and podcast pioneer Marc Maron plays series director Sam Sylvia, the crusty Morris Buttermaker to the GLOW girls’ Bad News Bears. Maron essentially plays Marc Maron, complete with all of the wry, cantankerous humor he displays in his stand-up act and in his former IFC series Maron. He plays a gruff, cocaine-fueled shlock movie director (a thriller named Blood Disco is his magnum opus) recruited to helm GLOW by a “money mark” producer, spending mommy and daddy’s money on his vanity project.

The series starts slow with the necessary exposition, introducing the viewer to Wilder’s plight, but it begins to pick up as the characters of the other GLOW girls — and their internal conflicts — come to light. Ironically, while Wilder carries the first half of the season, GLOW becomes more about Maron’s Sam Sylvia than about Wilder’s determination and perseverance. In fact, Wilder’s character becomes somewhat flat after she finally settles on a wrestling persona, an evil Russian that comes off as a very bad Yakov Smirnoff impression. Maybe it’s just that Colonel Ninotchka so wonderfully nailed the evil Russian character in the original GLOW series, but Brie seems miscast in the persona, though she nails she early episodes as the struggling fish-out-of-water actress.

John Morrison makes an appearance in episode one as Salty “The Sack” Johnson, a wrestler brought in to give the girls a crash course in pro wrestling. Morrison is a stand-in for Mando Guerrero, who worked as a trainer with the GLOW girls in 1986, preparing them for the first season. Mando’s nephew, Chavo Guerrero, was recruited to serve as stunt coordinator for the series, along with professional stuntwoman Shauna Duggins. Duggins, a longtime wrestling fan whose extensive resume includes work on Alias, Kill Bill, and 24, said she and Guerrero made a concerted effort to make the in-ring scenes look as close to the real thing as possible.

“We had a cast of 14 actresses and set out to teach them the basics of pro wrestling in time for shooting,” Duggins said in an interview with SLAM! Wrestling. “I said to them, ‘All I ask is that you come in with an open mind, trust us, and try hard. Our goal is to make you look amazing by the time we shoot.'”

While GLOW is set in the 1980s (and feature all of the Spandex, big hair, and bubblegum pop music you’d expect from that decade), Duggins said she and Guerrero tried to update the wrestling a bit, incorporating more contemporary moves that weren’t in fashion back in the 1980s.

“We wanted to push the envelope, so we included some more of the modern stuff that has the ‘Wow factor,'” she said. 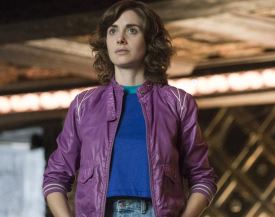 Teaching a group of actresses how to run the ropes and take bumps was largely a matter of trial and error, Duggins said, but when it came time to shoot, the girls were ready for action.

While the original GLOW was PG rated, GLOW features some coarse language and brief nudity, though certainly not as much as one might expect from a series about “Gorgeous Ladies” wrestling.

There are some very funny moments (particularly from Maron) and some surprisingly poignant moments. The subject matter may have been a hokey 1980s TV show that was essentially a parody of wrestling, but GLOW touches on more universal topics, including the meaning of femininity, sexual dynamics, and Hollywood typecasting. It’s accessible to all audiences. Cameos from Christopher Daniels, Awesome Kong, Joey Ryan, Alex Riley, Tyrus and other pro wrestlers add to the fun.