Look, I know that these type of WWE books are not aimed at me in particular; in short, at this point in time, I know too much about professional wrestling and its rich, complicated and compelling history. So to be fair to The WWE Book of Top 10s I complied my own Top 10s in different categories — Tye Dillinger would be proud.

The premise of The WWE Book of Top 10s is exactly what you would think. “More than 50 years of history in 100 lists,” it crows on the back cover. Some Top 10s are one page long, some go over two pages, and a select few get more room. There is nothing in-depth here. At. All.

It’s broken up into three main sections — Superstars, In the Ring, and Championships and Legends. 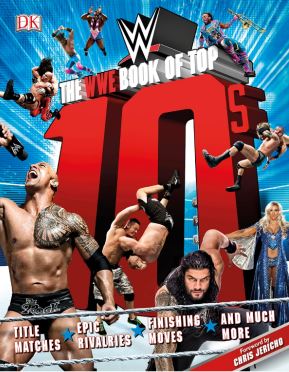 1. The artwork. There’s all kinds of great photos from WWE history here, and a few mined no doubt from the archives of Pro Wrestling Illustrated.

3. Fun memories. When was the last time you thought about WCW’s “Spin the Wheel, Make the Deal” match? That’s my point. There are lots of those examples, bringing back memories good, bad and perplexing.

4. Huh moments? As in, I’d forgotten about … Like Damien 666 being in the Top 10 Face-Painted Superstars. Oh wait, then I Googled him, and he never even worked for WWE, and was Galaxy in WCW under a mask. So double huh?

5. Attempts to get everyone in. It’s funny, because, say, Killer Kowalski isn’t listed in the Top 10 Canadians, even though he was a bigger star than anyone else listed, but he’s in there in the Top 10 Ruthless Superstars, #2 behind Abdullah the Butcher (arrgh! No original Sheik, but his nephew, Sabu, is here). So the Moondogs (Rex & King, for the record) are in the Top 10 80s Superstars.

6. Outside the box thinking. Some of the categories are quite unique, outside of the norm, so that makes them a little more fun to read about. One example is Top 10 Young Champions, and another is Top 10 Entrance Accessories.

7. Reasonably priced. If this book were over $25, I don’t think I could recommend it at all. As it is, everyone will get some enjoyment out of it — just some of us will get more frustrated than others!

8. Personal connections. We all have our own memories of things, like being at WrestleMania XX in Anaheim (where the main event is #7 on the Top 10 WrestleMania Main Events), or becoming friends with The Missing Link (Dewey Robertston), who gets mentioned in the Top 10 Superstars from Parts Unknown. You’ll find yourself going, “I was at that one” or “I saw that one at my buddy’s place” fairly often.

9. Donald Trump. But no photo. He’s in the Top 10 Stone Cold Stunner Victims. I’d give just about anything to see Austin stun him now, for real.

10. “I can’t believe they …” You’re supposed get upset and think of what you’d have put on that particular list instead. Like on the Top 10 Superstar T-Shirts, would anyone else possibly have thought of including John Cena’s 8-Bit Shirt, where he is all pixelated? Didn’t think so.

1. Layout. Again, it’s aimed at a younger audience who can apparently read things quickly sideways, likes exploding titles, and every single inch on every single page filled with something, white space be damned.

2. Tiny photos. Not throughout the book, but in many places the photos are small.

3. Frustrating ignorance of history. Whoa Nellie! Where to start with this one? (Dick Lane reference there, so go read about him and come back.) It’s WWE, so no one is surprised that the rest of the world is ignored. Sometimes. Never consistently. El Santo is the greatest masked man ever, but not on the list of Top 10 Masked Superstars; out of Japan, we get Jushin Liger but no Tiger Mask.

4. Re-written history, or conveniently ignored history. The Top 10 Jaw-Dropping Moments is fun, but if you mention Mr. McMahon and the exploding limo, where he apparently died, what is left out is that right after the angle, Chris Benoit murdered his wife, son and then killed himself, meaning that angle was in even worse taste after the fact. But that is not mentioned, for obvious reasons.

5. Errors of omission. You couldn’t have mentioned Barry O as a part of the Orton family? In the same section, Ric Flair’s late son, Reid, is left out. And how come no Jimmy Jack Funk? Heh heh.

6. Pushing anything current over the past. Look, I love seeing Kevin Owens and El Generico/Sami Zayn work against each other as much as the next guy, but to rank their rivalry over, say, Ric Flair against the likes of Dusty Rhodes, Terry Funk or Ricky Steamboat (seriously, Flair isn’t in this Top 10) is downright ludicrous. Ah, but then you read on and there’s a Top 10 Ric Flair Rivals page … but of course the first one doesn’t reference the fact that there’s another further along (and they aren’t on subsequent pages).

7. Technological shortcomings. This isn’t really about the book, just in general. When you get to the greatest theme music or best RKOs, wouldn’t it be great to be able to press a button and hear or see that? It’ll happen in our lifetime, but it’s a complicated rights/royalties road to walk first.

8. Exhausting. This is not a sit and read start to finish book. I found my eyes glazing over from the wacky layout more than once, and had to put it down. As such, it’ll find a good spot in your bookshelf in the bathroom, if you enjoy reading there.

9. Good luck finding out who wrote it. Once again, WWE has shorted the writer, Dean Miller, whose name only appears on the very last page of the book. Do people buy WWE books because of the author? Not in this case. But by not acknowledging the amount of work that went into it, you are slapping authors everywhere in the face. Similarly, no photo credits anywhere.

10. It’ll feel dated in about 10 minutes. The decision to include pages like Top 10 Rising Superstars was definitely a mistake. Charlotte Flair (#1) is already a star, and as for Kevin Owens and Finn Balor, well, they were already stars before they even arrived in WWE (not that you’d learn that here). Enzo and Big Cass are on the outs too. So you get my point.

Finally, to try to balance out the review, I once again turn over the page to my 10-year-old son (Ten! Ten! Ten!), Quinn, for his thoughts, this time in video format:

GREG and QUINN OLIVER are the father-son team behind the fun children’s book, Duck with the Puck.