“Beers and stories with ‘Mean’ Gene Okerlund” is a unique event that is coming to the Niagara Falls Comic Con on June 3rd. The voice of wrestling’s three major federations — AWA, WWE and WCW — will certainly have some unique anecdotes about the squared circle.

Okerlund was a little coy when talking about his upcoming seminar. “Not to say I wouldn’t have a cocktail or two along the way, which I will do,” said Okerlund. “I am sure it will revolve around wrestling.”

To understand this man you just need to go back to the beginning to get the enthusiasm he has for life and adventure. Growing up in Sisseton, South Dakota, Okerlund had a zeal for everything and anything. “Well, I went over to Mrs. Peabody’s for piano lessons,” recalled Okerlund. “I played in a high school band. I played basketball, football, competed in track. I played baseball in the spring and summer. I grew up in a small town out of the Indian reservation in South Dakota. I had the opportunity, unlike a lot of people, to do everything. When you come from a smaller town you can do that.” 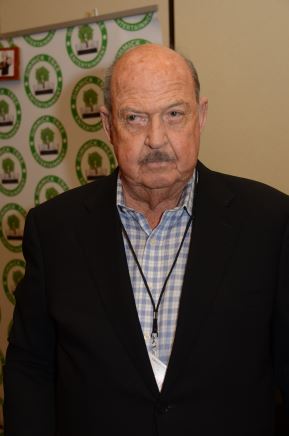 It was these opportunities that fuelled the confidence and curiosity that sent him towards the radio industry and then as a ring announcer and interviewer for the American Wrestling Association. “I didn’t really get into it (wrestling) until I was in my late teens,” said Okerlund. “In those days the wrestling was on late Saturday night at 11 o’clock. I kinda got into it. As you know I started in the AWA, but a lot of the great ones passed through that organization during the course of a year including a lot of great Canadian talent.”

While in the AWA Okerlund was in close contact with the wrestlers each week working on interviews. One of the talents who became a good friend was Canadian Maurice “Mad Dog” Vachon.

“Mad Dog Vachon was the best,” said Okerlund. “He was one of my favourites. You never really knew if he was shooting with you even if it was just a casual conversation, it would be something like (in a scruffy Vachon like voice) ‘You know something my friend …’ he would talk like that even in real life. He would step up to the counter at the supermarket and say (in Vachon’s voice), ‘You know something, my friend, I have peanut butter here.’ He was a great guy.”

Talking to Okerlund, he freely shares his memories of his 40-plus years of involvement in professional wrestling. One of the individuals he talked about was his old boss, AWA owner Verne Gagne.

“Great guy, never had even one instance of a problem with this guy until I announced to him that I was going to New York to work with WWE,” said Okerlund. “That he took a little personally and we had a few harsh words. Believe it or not I did the eulogy at his funeral. I had great respect for him and his family and everything he did. He was a phenomenal athlete and he had a pretty good mind for the psychology of the wrestling match. They were a lot different then then they are today. The six-minute, flip flop, up and down matches. Back in those days you had a lot of Broadways, a lot of 30-minute time-limit matches. We don’t see that today, they don’t have the time. The storylines are so accelerated that it just seems that everything goes by too fast.”

Here are some tidbits about famous wrestlers and personalities that Okerlund might talk about, if asked, at the Niagara Falls Comic Con.

Nick Bockwinkel: “A very intelligent, very bright, very capable technical wrestle,” said Okerlund. “Second generation, his father Warren Bockwinkel was one of the greats out of St. Louis, worked with Lou Thesz and others. Nick Bockwinkel was really a special guy. He wouldn’t have needed Bobby Heenan, but he and Bobby Heenan together were dynamite.”

Lou Thesz: “Lou Thesz set the standard,” said Okerlund. “I have met Lou many times. He was a very gracious, but very unassuming character. I liked him. Lou worked out of St. Louis, so he worked out of kind of that St. Louis Sam Muchnick contingent there where you saw guys like Harley Race, Pat O’Connor, a lot of the old time guys. Thesz really had some great matches all over the country.”

Jim Brunzell: “Jumpin’ Jim, I just had lunch with him in south Florida a week ago,” said Okerlund. “A great athlete; he could just about high jump about seven feet. A very capable guy, whose signature was the flying drop-kick. He tag teamed with Greg Gagne for years as the High Flyers. Jimmy is just a first class guy. Today he is 66 he doesn’t look a hell of a lot different today then he did 40 years ago when I was working with him.”

Roddy Piper: “Classic,” said Okerlund with enthusiasm. “You really hit a sensitive note there because I had so much interaction, but so much admiration for this guy. The Scotsman thing did very well for Roddy Piper. He was, as I would say, the consummate professional. He could sure as hell entertain people.”

Bret Hart: “Oh, Bret Hart, well I knew the family,” exclaimed Okerlund. “The tie-in I have with the Hart family is my son played hockey for the U.S. Olympic team in 1988 and our gracious host in Calgary, Alberta, Canada, was Stu Hart. Bret, Owen, the entire family, they had about 13 kids, I forget how many, but Stu and Helen were just great people and all of the kids were great. Bret Hart, I don’t have to say anything about this guy, he is a bona fide legend, an icon in professional wrestling.”

Lou Albano: “Lou Albano was an off-the-wall character. Lou was kind of a creative guy, especially if he happened to have a couple of bottles of Smirnoff under his belt.”

Okerlund is looking forward to meeting his long-time fans at the Niagara Falls Comic Con. “Niagara Falls is beautiful,” said Okerlund. “I like Buffalo and the Southern Ontario area. I started doing interviews in Fort Erie. It is all familiar territory for me. It was for the WWE.”

A trio of wrestlers, Kevin Nash, Scott Hall and Sean Waltman of the NWO, were scheduled to appear (but Nash and Waltman have since cancelled). Okerlund gave thought on his old WCW friends. “An NWO reunion that I am looking forward to because, hell, I was part of it,” said Okerlund. “I had a beer can and a tomato thrown at my face. It was serious heat.”

Grab a beer, pull up a seat and listen to the crystal clear, booming announcer voice of “Mean” Gene Okerlund. He will be happy to tell you a story about the superstars of the wrestling world.