Professional wrestling’s early chroniclers tended to produce survey works that gave readers little feel for the sport’s regional peculiarities. They reviewed the achievements of big heavyweight stars and recounted events that were deemed to be of national importance, but wrestling’s incredible complexity, in large part a product of both era and locale, was not fully examined. Rock Rims’ When it Was Big Time: A One Hundred Year History of Northern California Professional Wrestling joins a growing list of books that sets out to provide a comprehensive regional history of professional wrestling. It is not just one among the widening crowd, however. This work sets a new standard in the field.

Although the book’s subtitle states that it reviews wrestling in Northern California over a century-long period, it actually covers a slightly longer timeframe. Rims begins his detailed examination of professional wrestling in the 1870s, when the sport left the confines of ethnic communities and holiday festivals to emerge as a popular nation-spanning enterprise. His analysis concludes with the death of regionally-based wrestling in the mid-to-late 1980s, brought about by the rise of Vince McMahon Jr.’s monopolistic WWF. 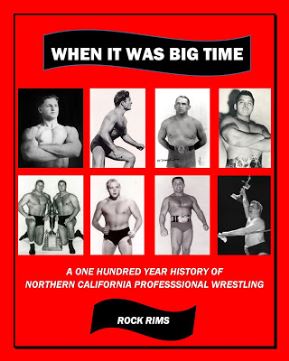 Rims introduces readers to all of the great wrestling talent who made a mark on the Bay area and beyond, including the gaslight-era Greco-Roman pioneers William Miller and Thiebaud Bauer; the dangerous “hooker extraordinaire” and jiu jitsu upstart Ad Santel; the athletic and intimidating Sharpe Brothers; and the groundbreaking Ray Stevens.

Where his work really shines, however, is in its examination of the various promotions and promoters who operated in the region. Rims vividly recounts the numerous power plays, betrayals, shifting alliances and outright chicanery that occurred behind the scenes as promoters jockeyed for market dominance. In this respect, his approach is very much in keeping with the spirit of the recently-deceased godfather of wrestling history, J Michael Kenyon, whose research did much to illuminate the colourful, but frequently malodorous, front office machinations of professional bone bending.

While When it Was Big Time surveys the breadth of wrestling’s history in Northern California, the lion’s share of the attention is given, appropriately, to Roy Shire’s San Franciso-based enterprise which operated for two decades beginning in 1961. Rims details how Shire, who learned his craft at the feet of Al Haft, Johnny Doyle, and most prominently, Jim Barnett, took his vision to the West Coast and interjected much-needed life into the scene. Shire’s innovative booking ideas, adept use of live studio television, and unwillingness to accept what others deemed to be the market penetration capacity for wrestling in the Bay region, allowed him to drive out well-established promoters such as Joe Malcewicz and Ad Santel, who had grown comfortable and complacent in their twilight years. Rims’ analysis of the resistance to Shire’s operations, his march to regional dominance, and his shifting relationship with the National Wrestling Alliance, provides a deeply insightful look into wrestling’s institutional history.

As clever as Roy Shire was at both establishing and maintaining a profitable wrestling fiefdom, Rims nevertheless avoids the error of unduly eulogizing the promoter. When It Was Big Time presents Shire as a complex figure who, for all his brilliance, had serious character flaws. Rims notes, for example, how relationships with small-town promoters, such as Modesto’s Johnny Miller, were frequently strained, and how his personality did little to endear him to the local TV station managers on whom he relied for exposure. Moreover, after years of maintaining iron-clad kayfabe, Shire’s decision to “expose” the wrestling business once the WWF juggernaut rolled in, highlighted a bitter and selfish side to his character.

In keeping with his implicit desire to provide a comprehensive but objective history, Rims typically avoids both simplistic characterizations and lurid tabloid-style analysis in his narrative. Yet, there is no question that he was a fan of the products that he grew up with, those being the Shire-era promotion specifically and the old territory system generally. Though there had been many instances in California of the old and stale giving way to the new and innovative, as the book draws to a close one is inevitably left with the impression that professional wrestling’s final transformation into “sports entertainment” does not sit well with Rims. He is certainly not alone in that sentiment among both fans and wrestlers who remember their glory days at the Cow Palace, Omni, Stampede Corral or any number of other once-halcyon regional venues across the continent. 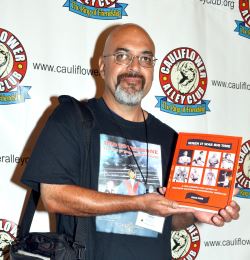 Rock Rims at the Cauliflower Alley Club reunion in Las Vegas in May 2017. Photo by Dan Westbrook.

When It Was Big Time is an extremely detailed and well-researched work of popular history. Chapter notes at the end of the book testify to the massive body of documentation consulted in preparing the work, including newspapers, interviews, web resources, and books by other authors. Beyond that, it is clearly written and analytical. Rims is a talented scribe who put tremendous effort into creating the definitive history of wrestling in Northern California. He achieved his goal.For readers who are looking to start their journey into professional wrestling’s intriguing past, and particularly the territory era, When Wrestling Was Big Time may prove to be a daunting and intimidating read. A better starting point to get an overall lay of the land would be a survey work such as Tim Hornbaker’s National Wrestling Alliance: The Untold Story of the Monopoly That Strangled Pro Wrestling. However, with the groundwork done, they should pick up this hefty tome. For those who grew up in Northern California watching Shire’s TV broadcasts or attended live cards at the Cow Palace or any number of smaller venues, When It Was Big Time will not only permit them a trip down memory lane, but allow them to explore cracks and contours along that path that they never knew existed.

C. NATHAN HATTON is the author of the award-winning book Thrashing Seasons: Sporting Culture in Manitoba and the Genesis of Prairie Wrestling and has 20 years of involvement in submission grappling. He holds a PhD in History and teaches at Lakehead University in Thunder Bay, Ontario.