Mat Matters: From indy fan to a targeted reporter

I love being a fan of professional wrestling. Over the years I have met so many nice people from all walks of life who enjoy leaving the troubles of the world behind for a few hours and blowing off some steam by watching the matches. By day I am an elementary school teacher and a group of my fellow educators started regularly attending the local wrestling shows about 17 years ago. We would meet up for a few beers and head off to watch Eric Young, JT Playa, Body Count and Shaun Spears take to the mat.

We even developed friendships with other fans who sat in the same section month after month. It was an interesting dynamic of groups of people who never would have met in the everyday working world, but got along fine at the matches. Heck our group even had its own, pretty sad, nickname “The Drunk Section.” We had our own chants; we were into every match and had a lot of fun! 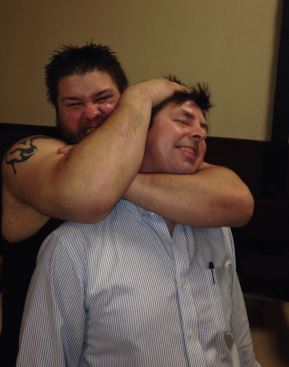 He was Kevin Steen when he caught me unaware!

Over the years I have remained a loyal fan of local wrestling. My role has changed a bit since I have been writing regularly for SLAM! Wrestling over the past four years. The crew that attends the matches with me is usually comprised of Derek Gallacher and Kerry Felstead and they have come to expect that I will duck out of the show to interview someone.

I have had some interesting interactions with the fans and wrestlers at these indy events. There was the time Tyson Dux playfully punched me in the ribs on the way to the ring for SMASH Wrestling. Make sure you ask Tyson to do his dance. Or the time when the Fraternity tried to pry my notebook out of my hands as I was reviewing the matches for this web site. It was a battle of wills as I was not going to have my book covered in sweat and blood. 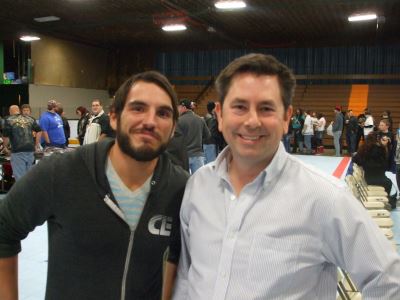 Johnny Gargano and I.

I once asked Johnny Gargano to try to keep his aerial assault away from my side of the ring as my back was hurting and wouldn’t be able to jump out of my chair and run out of harm’s way. Alas, Gargano sent all of his offense my way. I learned how to drive a van while being hit in the arm, many, many, many times by the giant paws of Angelo “King Kong” Mosca while he told me wrestling stories.

I marked out at an Empire State Wrestling show when Chris Cooper complained, during his in ring promo, about my article about his opponent. You may have missed my WWE Network debut, but I was mysteriously referred to as Kevin Owens’ hook-up to get him and his WWE buddies a cool tour of the Taronga Zoo.

My fan interaction over the last few years has been interesting. I love interviewing parents with their children about their experiences at the matches. The kids get really into the action while their parents enjoy sharing the time with their loved ones.

Even though 99% of my experiences in the crowd have been positive, there have been a few head scratchers. I was at a show in Welland, Ontario, and sitting in front of me was a mother with her teenage daughter. They were really done up, too done up for the wrestling show kind of crowd. I soon found out why as during the match the mother coached her daughter on the finer points of picking up a wrestler. She even reminded her daughter that the wrestlers could become TV stars.

At another event a guy came up to me and wanted to know if I was a WWE scout. I asked why he would think that and he told me that I was too well dressed and that the WWE was known to scout at the small local shows. I tried to convince him that I was not a scout. I was not very successful. Later that night the same guy came out of the bathroom with very wet, undone pants. He waddled over to his girlfriend and had her do up his foul-smelling pants.

A few years back I had the chance to meet Scott Steiner. When I approached him a fan jumped in front of me and yelled at him, “Don’t you know who you are? You are Scott Steiner! You can’t let anybody hold you down! You are great! Don’t take any garbage from anyone!” Steiner calmly stared at him until the guy went away. I even witnessed drunk fans attack a wrestler. That did not go well for those inebriated buffoons. 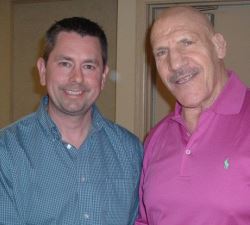 Bruno Sammartino still posed with me even after my awkwardness.

Now, the fans aren’t always the ones who have awkward moments. Even I have had a few encounters that were very awkward. When I finally met Bruno Sammartino I had a whole plan of what I would say to the living legend. Unfortunately, when I finally stood in front of the former WWE champion I blurted out “Bruno, I have twins too!” (Very similar to a Mr. Irvine saying to his idol “My name is Chris too!”) Bruno took a step back, studied me very suspiciously, slowly and purposefully he said in an even voice, “What is your name? My twins are old now.” I put my head down, shed an internal tear or two and left feeling crestfallen.

Perhaps my strangest moment was taking a wrong turn at a wrestling show that was held at a convention centre. My buddy Derek and I had just bought a beer and head down a hallway. We thought we were taking a short cut back to the matches. Soon we found ourselves on a stage in front of hundreds of parents and grandparents. We were the uninvited guests on the stage of a dance competition. Oops.

I have loved getting to know the promoters, wrestlers, stage hands and fans that make the wrestling world so fun. I am sure we will make many more interesting memories!