It seems like it’s the dawning of a new direction for WWE. Sunday at the Backlash PPV a new WWE Heavyweight Champion was crowned when “The Maharaja” Jinder Mahal beat “The Viper” Randy Orton, much to the chagrin it seems of the WWE universe. But what the WWE fans who rail against a “jobber” or “undeserving” champion don’t know is that Mahal, or Big Raj as I knew him is MORE than deserving — he’s perfect.

WWE is heading into the second biggest market in the world in India, just behind China, and needs a flag bearer people can get behind. Why do you think John Cena learned to speak Mandarin? 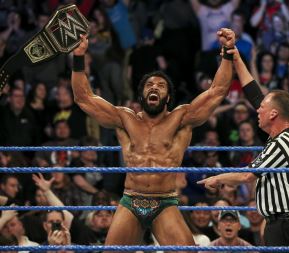 The proven success in India of companies like Impact Wrestling and the Great Khali’s CWE demonstrate that the area is ripe for the pickings. Of course, WWE is going to capitalize on that. That’s what good businesspeople do.

How do I know Jinder is right for the role? Well it just so happens I helped to break him into the wrestling business. Trained by a combination of his uncle, The Great Gama, Rick “Razor Ramon” Titan, and Jerry Morrow, along with tutelage from Olympic judo bronze medalist Bad New Allen Coage, Jinder cut his teeth on the long roads of western Canada. Twenty-hour drives from Calgary to Thunder Bay to work a single show were a regular occurrence and Jinder was a road warrior to say the least.

Early on he tagged with his cousin, The Great Gama’s son, Munraj Sahota (who is now known as The Stamina Papi Fabian Ribiero) in a very successful tag team, known as the New Karachi Vice and also Sikh and Destroy. As he got older and more mature it was obvious to anyone who knew what talent and hustle look like, that Jinder was exactly what WWE makes into huge stars.

Guys and girls don’t get to “The Show” by luck. They don’t keep spots by accident. They get there through hard work. Dedication. Perfecting the craft and always improving and learning. If there’s one thing I can tell you just by looking at his current physique, its that Jinder is taking this VERY seriously and working EXTREMELY hard in the gym to look like a champion should look. You don’t get in shape like that by accident either. Clean eating is the first thing I can tell he does. Fitness is a key component and Jinder may be challenging for fittest man in WWE.

Superstars like Seth Rollins and Cesaro are examples of the crossfit mentality of training working really well for wrestlers. A combination of Olympic lifts, high intensity intervals and explosive plyometrics make the best athletes on earth. So for those who immediately fall into old habits saying “he takes steroids!” you are wrong. Look at Jinder’s old physique and look now. Not much is different except eating habits and training intensity.

If you knew you were getting a title shot and chance to represent your familial country of origin as a flag bearer you might work a little harder too.

By adding the very talented Bollywood Boys from NXT to Jinder as the Singh Brothers it gives a great stable of characters a lot of room for new and exciting angles, feuds, and matches. It wasn’t that long ago I said something similar to the Bollywood Boys while at a show in Calgary, that I said to a young Jinder Mahal. “You are the right ethnicity, at the right time, in the right place. Be ready.”

And that’s what this really comes down to. Previously Jinder wasn’t ready. The Bollywoods were unproven in NXT. Timing wasn’t right. But now, look where they are. This is the place. Now is the time. And Jinder and the Singhs are ready to take the center spotlight and run with the ball.

Mark my words now. Jinder Mahal will go to India and it will be like Muhammad Ali going to Africa to fight. Crowds will mob him in the streets. India will rally behind its WWE Champion, one who is able to bridge the gap in language and attitude. And it couldn’t happen to a more deserving and humble guy. But first you the fans gotta give the guy a chance. He will surprise you. Don’t assume — it makes an ass out of U and me.

I am proud to know Jinder and look forward to his long and successful reign.

All hail The Maharaja!

It’s been a while since I’ve written something for SLAM! Wrestling and I am getting all misty with memories. Better wrap this up before I start blubbering about EY and Roode! LOL

Make sure you are supporting your local indy promotions and check out the great stuff other companies like ROH, Lucha Underground and Impact Wrestling

In the meantime, and in between time, that’s it, another edition of Devine Inspiration. Bye now.