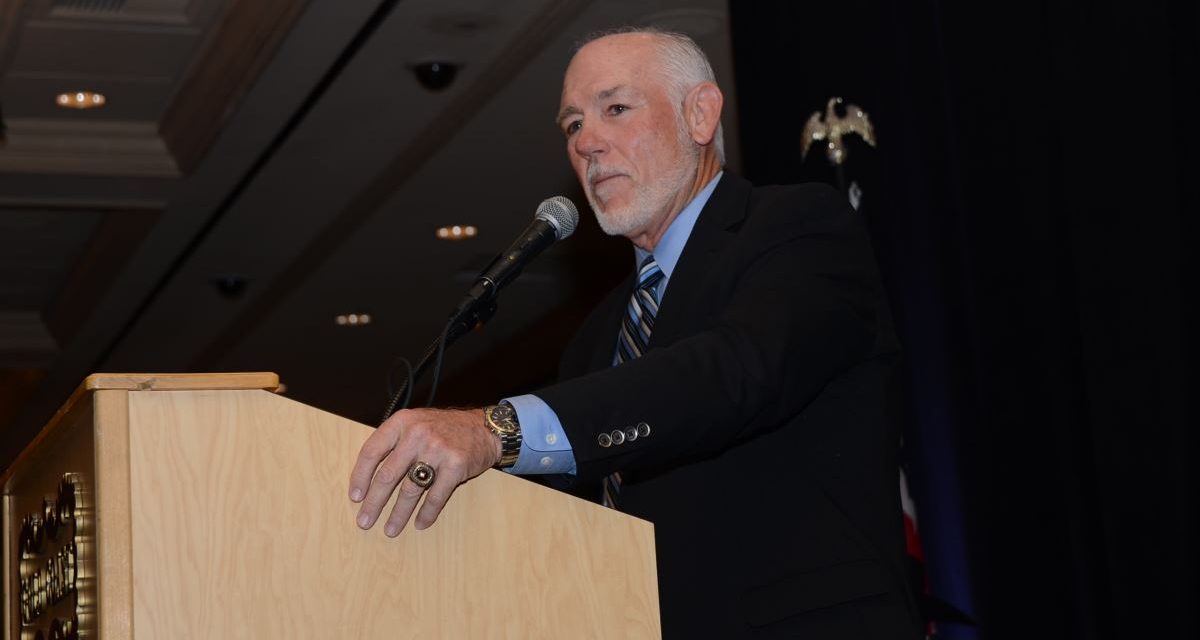 LAS VEGAS – Though it wasn’t obvious to everyone in the room, there was a special guest watching in on Tully Blanchard as he received the top award in professional wrestling on Wednesday. Tuning in on a phone from Japan was his daughter Tessa Blanchard.

Tully Blanchard was on stage to get the Iron Mike Mazurki Award at the 52nd Cauliflower Alley Club reunion, his daughter watching on from afar while training in the Land of the Rising Sun, seeing him deliver an intense, motivating, emotional speech.

“I used to be long-winded,” Blanchard teased, looking at the clock after a smooth, quick-running evening at the Gold Coast Hotel & Casino. “I will be concise. I only have four pages.” 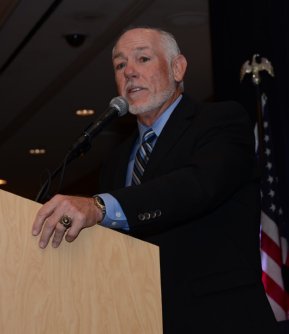 Blanchard actually met Mike Mazurki when he was 10 years old, in the Blanchard homestead. “It was amazing that a guy that was in a movie with John Wayne was in my kitchen.”

He shared what it was like to grow up a promoter’s son, and how he was treated by other wrestlers. “I switched heel and our business tripled,” he said, crediting Wahoo McDaniel for all the lessons in and out of the ring. He talked about the importance of the referees, and his time as a ref to really understand how the business worked.

Of course, so much of the world knows the 63-year-old Blanchard from the Jim Crockett Promotions based in Charlotte, NC. “I cannot remember when it was not a sellout someplace,” he recalled.

Then there was the jump to the WWF alongside Arn Anderson at the end of 1988.

“We had fun every night. You got to go out and entertain people every night,” said Blanchard, reminiscing about how over Ricky Steamboat was at the time. “All you had to do was take bumps.”

“Then it comes to making choices,” he said, referring to a bad decision in Madison, Wisconsin, followed by a failed WWF drug test on November 2, 1989, in Philadelphia. A WCW deal followed, but the company learned about his failed WWE drug test and terminated him.

He was unemployed and vented. “I was so mad I couldn’t move. I laid in my bed and I was paralyzed except my brain was going at light speed.” It was that night he said, “Jesus, take over my life.”

With experience as a preacher, especially in prisons, Blanchard’s powerful message continued, talking about a second chance for people if they decide to walk it.

“You can walk a different path, and people respond to that and I am thankful,” he said. 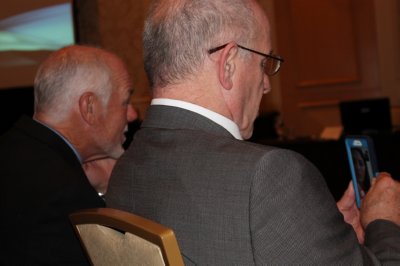 Tessa Blanchard, on the phone, is beside her father, Tully, watching JJ Dillon make the introduction for the Iron Mike Mazurki Award.

It was JJ Dillon who introduced Blanchard, going from knowing each other when both were wrestlers to becoming a manager of Blanchard and the Four Horsemen.

“For the record, Tully Blanchard never uttered the words ‘I quit,'” reminded Dillon, referring to the famous battle between Blanchard and Magnum T.A. over the U.S. title.

The emcee of the evening, Jim Ross, got a standing ovation before starting the banquet, attended by about 450 people. He admitted that he only learned he was running the show about noon today, and sent regrets from Mean Gene Okerlund who was scheduled to be beside him on stage.

“I’m glad to be here with like people,” said Ross, who mentioned being a little unprepared, flipping through his notes. Ross was interrupted by Pat Patterson, who offered up his “cockeyed” glasses.

Of course, that Ross was on stage at all is a tribute to his commitment to both pro wrestling and to the Cauliflower Alley Club.

“JR is the toughest son of a bitch” for going through the rough road of losing his wife, Jan, in an auto accident in March, said CAC President Brian Blair.

Up first was the Jim Melby Award for contributions to professional wrestling history and it went to Dave Meltzer, who Ross said had “as much knowledge of pro wrestling and MMA as anybody.” Meltzer, who was introduced by Bryan Alvarez, talked about coming to CAC events since the 1980s, when it was a very closed event in Los Angeles. It was Houston promoter Paul Boesch who was his inside connection to get in, and through Boesch, he met so many legends from the past.

“When you really study professional wrestling, the history is so fascinating,” said Meltzer. He first thanked his Wrestling Observer subscribers, and then moved on to historians like Steve Yohe, the late Jim Melby for putting him over, sportswriter Frank DeFord, and a few key wrestlers like Terry Funk who gave him “riddles” to figure out rather than just telling him secrets.

In an exceedingly positive, excited speech, Meltzer ended by asking WWE creative to treat fans with respect. After watching for a couple of hours, “you don’t want to be slapped in the face that this is cornball,” he said.

The second award was the Charlie Smith Referee Award. Last year’s winner James Beard reminded the crowd that “referees tended to do more back in the day,” and that he was in awe that all recipient Bobby Simmons did in the Georgia wrestling office.

Simmons got emotional, especially when talking about his friend Charlie Smith. “We talk every day. If he can’t find me, he’s looking for me, and if I can’t find him, I’m looking for him.”

He ended with a story of getting a poster from his friend Chuck Thornton from the first wrestling show that he went to when he was eight years old.

The matches “captivated” the eight year old, and he called it “the night that changed my life. I fell in love with something that I didn’t understand.” 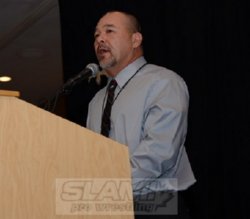 Tokyo Monster Kahagas received the Men’s Wrestler Award, but did not appear in gimmick with his traditional red-painted face and long, flowing, intimidating outfit. In introducing him, James Beard said that there is “more to him than” his gimmick and that “everywhere he goes, he gets over.” Promoter and announcer Howard Weil introduced “P-Diddy” and talked about what Kahagas brought to shows.

Kahagas admitted to being not all that comfortable on the microphone, especially given the mysterious nature of his character. “I’m tripping balls right now” for really cutting his first promo, he joked. “My mind is bugging out right now.” He thanked promoters especially for taking a chance on him through his 20 years as a pro wrestler. 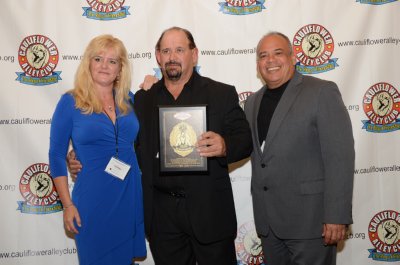 Fidel Dave Sierra, who was David Peterson, Top Gun, and the Cuban Assassin, among other names, also received a Men’s Wrestling Award. “If he was 20 years old today, he’d be making a lot of money,” said Ross, praising Sierra.

Ricky Santana was tasked with introducing Sierra, and did the job despite never going over Sierra in the ring. He has known Sierra 31 years (“longer than both my marriages”), meeting in the office of Florida Championship Wrestling.

“Thirty-eight years in this wrestling business and I still love it like I was starting yesterday,” said Sierra, who learned the sport in Florida from Hiro Matsuda before turning to outlaw wrestling. Eventually he turned more “legit” and began his journey to Texas and then the rest of the continent.

Sierra mentioned many, many names that he worked with and owed his career too, from the Briscos to Andre the Giant to Ata Maivia who made the call to get him booked in Dallas.

But Sierra wasn’t ready to tell all. “If I could tell some of those stories, they wouldn’t let us back up here,” he said. In remembering the late Curt Hennig, who Sierra worked with in Portland, he teared up recalling a sell-out bout.

His last thank you went to his wife Fantasy — who “I have to thank otherwise I’m going to have a hell of a lot of heat.” She served as his valet, manager, tag team partner and so much more through the years, but he said he wouldn’t be here today without her.

While Kevin Von Erich was not able to be in Las Vegas for his Lou Thesz/Art Abrams Lifetime Achievement Award, his oldest son Kevin Marshall Adkisson was sent in to accept in his stead. But before Marshall took to the podium, Blair “told the truth” and said that two weeks ago that he wouldn’t attend, that he was planning a religious-based trip to Israel and that it would conflict.

“It’s an honour to accept this on my father’s behalf,” said Marshall. He read a note from his father. “I was so lucky to work with the best our business had to offer,” sent in Kevin Von Erich, noting that even the underneath talent meant everything to the show.

“He’s an even greater father than he was a wrestler,” said Marshall, in awe of the pain that his father went through with the loss of his five brothers.

On Tuesday night, at the Bockwinkel Baloney Blowout, the Women’s Wrestling Award was presented to all of the Gorgeous Ladies of Wrestling.

Besides the presentations, a specially-made wrestling belt with the likenesses of all the honourees, signed by all of them, was raffled off, and a special painting of Kerry Von Erich done by artist Rob Schamberger at the CAC was auctioned off.

Blair also shared a few stories of how the benevolent arm of the CAC has helped wrestlers in need, including Tony Marino and the late Frenchie Martin.

Greg Oliver was privileged to get to sit at the table of the main eventer, so was probably only one of a few that saw Tessa too!