That night the CAC’s Baloney Blowout began to GLOW

LAS VEGAS – The Bockwinkel Bologna Blowout had a particularly upbeat and heartwarming atmosphere this year thanks to the evening’s main honorees, the Gorgeous Ladies of Wrestling. It was maybe unusual for 16 women to be the focus of a wrestling awards ceremony, but their recognition speaks to the broad and welcoming reach of CAC’s “Ring of Friendship.”

SLAM! Wrestling’s Greg Oliver ran a roaming mic to open the Blowout, at Las Vegas’ Gold Coast Hotel & Casino. In honor of George Napolitano’s upcoming induction into the Pro Wrestling Hall of Fame, Oliver acknowledged the critical role of photographers in documenting wrestling history, recognizing Scott Romer, Mike Lano, Wayne Palmer and several other photographers in the room. As the room slowly filled, he pulled out Bob Orton, Jr., Sam Houston, Dawn Lemke, and newcomer Madison Miles. When Buddy Lane was asked if he had any memorable stories to share, he replied, “none you can say over the air.” 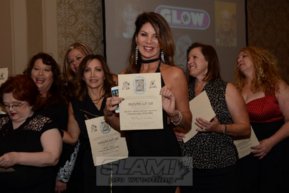 Hollywood (Jeanne Basone) shows off her award with many of the other members of the Gorgeous Ladies of Wrestling. Photo by Brad McFarlin

The evening’s formal program began with memorials for recently deceased board member Tom Drake and the person that past-CAC president Karl Lauer called “the backbone of the Cauliflower Alley Club,” Ruth Silverstone.

Following the remembrances, Bill Apter, brought to the room “live via satellite,” began the introductions of the performers of GLOW. Only a few blocks away from their original home in the now-demolished Riviera casino, the performers from the Gorgeous Ladies of Wrestling were honored with the 2017 CAC Women’s Wrestling Award.

Created by Matt Cimber in 1986, during the afterglow of the rock ‘n wrestling connection, GLOW was broadcast nationally to over 50 markets and lasted four seasons. GLOW is experiencing a full-blown revival, with a Netflix-produced series due in the summer.

In her speech, Trace Meltzer (Roxy Astor), said that “if you go in a room anywhere and say you’re a GLOW girl, people know what that is.” Each honoree was unfailingly upbeat and energetic. “If I had a flower for every time my sisters made me smile,” said Lily Crabtree (Corporal Kelly #2), “I could walk through a garden forever.”

Dee Booher (Matilda the Hun) performed her theme song, “I Eat Raw Meat,” and as she finished, she grabbed MC David Buckler in a headlock

They each thanked GLOW creator Matt Cimber, who in turn acknowledged that “it was always the girls who made the show.” Cimber told a story of meeting CAC-founder “Iron” Mike Mazursky when Cimber first came to Hollywood, remembering it as one of the biggest thrills of his life. The philosophy of GLOW, he said, was to make it “the Hee-Haw of wrestling,” like the rodeo clown who has to do everything the cowboys do but also make you laugh while they do it.

On Wednesday night, the CAC closes its annual reunion with a formal banquet and a number of awards.