A few weeks ago my three children and I were asked to review a wrestling themed book for SLAM! Wrestling. What a pleasant surprise it was to open the mail box one afternoon to discover a flashy copy of Lucía the Luchadora.

From the start my children, twin six-year-olds Arleigh and Braxton, and 11-year-old Avery, were enthralled by the superb illustrations of Alyssa Bermudez and the captivating story written by Cynthia Leonor Garza. As a parent, I must admit that at first I was skeptical of the merits of a wrestling-based book, but I was gladly mistaken by this 30-page firecracker. 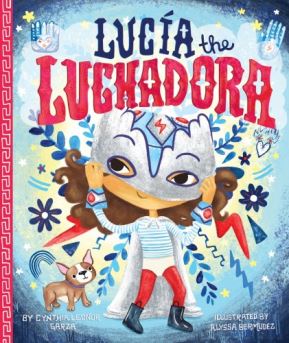 The message of the story is clear and the inclusion of wrestling Luchadors only helps to spark the imagination of young children. The story is about Lucía, a little girl who encounters some boys who belittle girls. Later her Grandmother providers her with a costume that was inspired by Lucha legend El Santo and she is transformed into a hero. In the end she realizes that even if she does not wear her mask she is still a hero in her heart.

Her twin brother Braxton chimed in that. “Lucía is really brave like Arleigh is. I like that she can twist and turn off of the monkey bars.”

Their older sister, Avery, took a slightly different slant on the book. “I liked the whole idea of girls being super heroes,” said Avery. “I also liked how she got ‘Spicy mad. Kapow kind of mad.’ They were good words.”

Soon after we received the book Arleigh, Avery and Braxton were able to interview the author, Cynthia Leonor Garza. Here is the transcript.

Arleigh, age 6: How did you get the idea for writing this book?

Garza: I was watching my daughter, who was about 4-years-old then, run around playing superhero with a Hello Kitty cape she got for Christmas. I had never seen her play superhero before — princess yes, many times — but she was having so much fun wearing a cape and I thought to myself, why do the boys always get to be the superheroes? Why can’t the girls be superheroes, too? I knew immediately that I had to write a story about a little girl who wants to become a superhero. And I knew I had to make her extra special, so I made her into a luchadora.

Braxton, age 6: Is this a real story or not real?

Garza: Lucía the Luchadora is an imagined story, but I’ve seen bits of Lucía’s personality in so many brave girls and boys that I’ve met. Writers often draw their inspiration from real life, but the fun about writing fiction is that you get to write the story your heart wants to tell, and there are endless possibilities.

Arleigh: How did you think of all the words in this book because there are so many words in it? 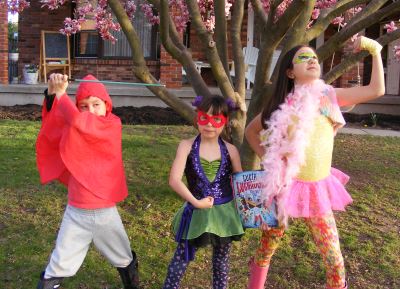 The Smith kids take inspiration from Lucía the Luchadora.

Garza: I think there are around 700 or so words in this book, which actually isn’t a lot when you think about the books grown-ups read, which can have more than 150,000 words. Yikes! That said, because I only have 32 pages to write the story, I have to be careful with each and every word I choose. I like the words KA-POW and moxie and thunderstruck because they pack a big punch on the page and when you read them out loud. I think about words a lot and love to use the dictionary to look up words, even the ones I already know.

Garza: Since the book has come out, I’ve seen a few masks just like Lucía’s. At one school I visited a few weeks ago, a super cool librarian was wearing a Lucía mask that her friend made for her. And I have a mask like Lucía’s too, and a long shiny silver cape to match. When I put the mask on, you can’t even tell it’s me behind it!

Avery, age 11: Where is the story set? Is it in Mexico or elsewhere?

Avery: How old is Lucía?

Avery: What made you choose to write a story about a Luchadora?

Garza: I grew up in South Texas near the border between the United States and Mexico, and when I was small, I used to go to the mercado with my family in Nuevo Laredo, on the Mexican side, and would always see lucha libre masks and little wrestling rings with luchador action figures for sale in the market stalls and they always fascinated me. My brothers got the rings, since they were big into WWE back in those early nineties days, and I always got a doll. I guess I’ve just always known that lucha libre and wrestling wasn’t just a sport that interested boys, and that girls and women are just as capable of being great fighters.

Avery: Why did you choose El Santo to be in this story?

Garza: I think there’s a rule somewhere that says you must mention El Santo in any lucha libre story. El Santo is known as the greatest luchador of all time, but what he represents is so much more. Aside from being awesome in the ring, he was also a justice seeker on the big screen and in comic books and cartoons. Over time, he really became a cultural icon in Mexico and even in the United States for those who follow lucha libre. And the coolest thing about all that is that beneath the mask, El Santo was a real man named Rodolfo Guzmán Huerta. I think he’s the closest thing to a real life superhero many people have actually ever known. And I think ultimately, his story, just like Lucía’s, is about how ordinary people can do extraordinary things if they just have the courage.In the Smith house Avery, Arleigh and Braxton gave Lucía the Luchadora three thumbs up! It is a great book for the entire family and the strong message will resonate with families everywhere.

CALEB SMITH thinks that this book would be great in any school library. Thank you to Pow Kids Books and SLAM! Wrestling’s Greg Oliver for giving the Smith kids this great opportunity.