Kahagas has wrestled worldwide for nearly 20 years and over the past six years has made a full-time living from the world of professional wrestling. Before that, he was a small business owner in the retail pet industry in Sebring, Fla. That was his main source of income for 26 years, 16 of those as the shop owner. But once his calendar filled up with wrestling commitments, he left that industry behind. 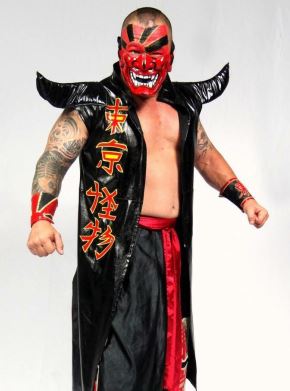 “It was kind of like a no-brainer to me,” Kahagas said. “I was staying busy and doing good.”

Yet Kahagas, the 2017 recipient of the Cauliflower Alley Club Men’s Wrestling Honor, is one of a handful of award recipients who has not worked for one of the current “big three” companies — WWE, TNA or ROH. He also is touted as one of the most-booked wrestlers for the past two decades, having worked throughout the United States and breaking into Panama, the Dominican Republic and Mexico.

“It’s like being appreciated for what I’ve done and [being] able to actually make a career out of the independents and being able to be acknowledged for it,” Kahagas said.

Though based in Florida, Kahagas mostly is booked out of state and beyond, but he most enjoys stepping between the ropes in Texas.

“There’s history throughout the U.S. and throughout the world and fans react in so many ways, but when you go to Texas, you an feel that old school vibe, the old school chants,” Kahagas said. “The people, those are the people that stay and watch the whole show and enjoy it … Texas is just to me, they’re branded, they’re a one of a kind fan base.”

His opportunity to venture to Central America came through Hugo Savinovich, a former member of the WWE Spanish announce team.

“He gave me the name Tokyo Monster,” Kahagas said. “Through Panama, I was immediately working in Puerto Rico.”

The Dominican Republic and Mexico soon followed. Kahagas has worked for World Wrestling League and Dominican Wrestling Entertainment, among others in Central America. For the Tokyo Monster, his matches with Panama Jack Daniels in Revolution Xtreme Wrestling (Panama) stand out above the rest.

“To me, [Panama Jack Daniels is] a major star over there,” Kahagas said, “and I just really enjoyed going over there. The atmosphere, the people.”

Stateside, his battles with Damien Wayne in NWA are favorites. In 2012, the Tokyo Monster put his NWA World Heavyweight Championship on the line against Wayne in his first defense of the title.

Evolving his character while staying true to its origin lends itself to Kahagas’ longevity. That combined with his work ethic ultimately resulted in becoming the first NWA Triple Crown winner — that is, the first to hold the company’s National, World and North American heavyweight championships.

“To achieve that, there again, it was something not expected,” Kahagas said. “It was not a goal. It’s just something that happened. To be able to do that, it’s just one of those things. Of course, it’s been an honor to be involved in the NWA and be part of its history carrying their major titles.”

And still, the Tokyo Monster said he is thankful for promoters who bring him in and trust him to help represent their company.

“Stuff like that really gets me as far as appreciation,” Kahagas said. “I’m an indie guy. No one needs to fly in an indie guy … I’m really, really glad to be able to say that promoters were able to look at me to help carry their companies.”

But to be recognized by his peers in the CAC with the Men’s Wrestling Honor means more than its namesake expresses.

A CAC member since 2014, Kahagas said that the first time he attended the reunion in Las Vegas, it was “intriguing” to see people take time away from their personal lives and families to support wrestling.

“It’s almost like Christmas for a lot of people,” said Kahagas, who found himself among like-minded people in the CAC crowd.

“I like to believe that everyone there feels the exact same way I do about [wrestling],” Kahagas said.

The recognition is like the part of a dream that “happens unexpectedly,” according to Kahagas, who now finds himself in the history books alongside recent honorees like Paul Orndorff, Ken Patera and Jake Roberts.

This year’s CAC reunion, its 52nd, will be held May 1-3 at Gold Coast Hotel & Casino in Las Vegas.