‘How blessed am I?’ Bobby Simmons’ journey from referee to pastor

At the upcoming Cauliflower Alley Club reunion, Bobby Simmons is set to receive the Charlie Smith Referee’s Award. The honour means more to him because it has Charlie’s name on it than the fact that his own time as a referee is being recognized.

“I started to work for the Atlanta wrestling office running errands when I was 14 years old, and that’s when I first met Charlie, and I’ll be 62 this year,” said Simmons, who calls Atlanta home. “Charlie is the guy that actually trained me.” 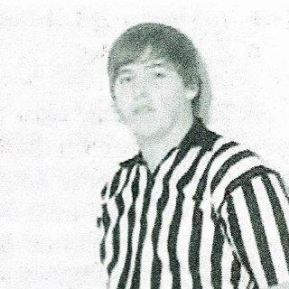 But Simmons will admit that giving credit to the third man in the ring is the right thing to do. “Anybody that’s ever wrestled, they know that the referee can’t necessarily make the match, but they can sure tear it down. They can destroy it.” The first booker that he ever worked under, Tom Renesto, shared a simple fact with Simmons: “Bobby, remember you are not part of the show unless I say you’re part of the show.”

Like a wrestler, a referee needs mentors and teachers to perfect his craft, so Simmons learned from the likes of Charlie Smith and Ronnie West, and when he got to see wrestling in other territories, he’d watch his striped colleagues.

An early lesson came from Wayne Cowan, who later became Dutch Mantel and manager Zeb Coulter. Cowan was wrestling “The Missouri Mauler” Larry Hamilton and Simmons was the rookie referee. “Green as a gourd, scared to death, Wayne whispered in my ear. He said, ‘Bobby, always work to the left of the heel.’ At the time, it didn’t really register what he was telling me, but since we work left-handed and guys throw punches with their right hand, if I’m on his left side and he punches a guy, I don’t see it, therefore I can’t call it. Just that one little insight helped me more than anything that first night to learn to stay to the left of the heel as much as I possibly could. That never changed.” 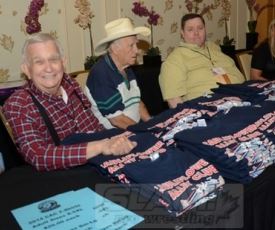 Most of Simmons’ career was spent in and around Atlanta, where he started as a ref for Ann Gunkel’s All-Star Wrestling Alliance promotion during the Georgia wrestling wars. He later went to work for Georgia Championship Wrestling and refereed some of the most historic matches of the 1970s and 1980s. A few bouts really stand out. “The greatest match I was ever involved in was between Jack Brisco and Dory Funk Jr. Those two guys just amazed me. They were doing the loop after Jack won the title,” he said. “They would go an hour and never call a spot. They just knew what the other guy was going to do. All I had to do was stay out of the way.”

Simmons was more than a referee, though that isn’t always widely known. He wrestled a number of matches, primarily in Florida under a mask in preliminary bouts, assigned there by the Georgia office to help out another promotion; since Simmons also doubled as an employee in the Georgia office, he knew what was best for business.

He also knew that the business could be nasty at times. When Jim Barnett, the primary shareholder in the Atlanta office, was pushed aside in 1983, Simmons found it hard to work with new boss Ole Anderson. He tried, but the business had changed. “It was like running a daycare center for adults by that time. We were doing the tours up north. I was getting phone calls in the middle of the night where guys were trying to drive Lincoln Continentals down a railroad track,” he recalled. “I walked away, but I kept my hand in it. I refereed a little bit for some of the independents. Ole would call me from time to time when he couldn’t figure something out, he’d want to know how this worked or that worked. It was what it was.” Simmons also worked briefly with Gunkel again as she tried to restart in 1985. 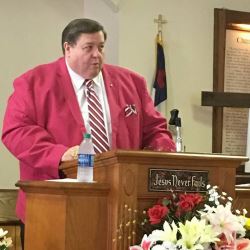 Pastor Simmons at the pulpit.

Post-wrestling, Simmons tried the insurance business before getting hired by RR Donnelley in Atlanta as a dispatcher, where he worked for 31 years, recently retiring. In 1991, he “felt the call into the ministry and I started pastoring churches.” Faith Baptist Church was home for 17 years, and then he moved to the church he grew up in, Friendship Baptist Church. Though still very busy, Simmons finds time for friends — including running occasional gatherings of wrestling friends for a potluck at his church — and especially, family, treasuring his time with grandkids since he was away from his own son and daughter so much. “I’ve had a full, busy life and I have been blessed beyond measure.”

One of those friends, Chuck Thornton, the greatest historian on wrestling in Georgia, recently brought it all full circle for Simmons at one of their reunions. At a previous gathering, everyone had tried to remember the first ever wrestling show that they had attended in person. For Simmons, it was February 1963, but all he could really remember was that Fritz Von Erich and Lorenzo Parente were in the main event, and that Bill Dromo — who later became a cherished friend — was on the card.

Thornton’s father ran a funeral home and the wrestling promotion in town used to drop off posters to hype upcoming shows. Young Chuck started collecting the posters. That day at Simmons’ church, Thornton arrived with a special poster for Bobby — from the first show he’d ever been to.

“I took it and had it framed. I’ve got it hanging in my house,” said Simmons. “I was showing it to my son, and I told him, ‘This is going to mean nothing to you, it’s going to mean nothing to your sister’ — I have a grandson that’s just crazy over wrestling, or what he thinks is wrestling. I said, ‘This is just for me,’ but I told him what it was. As I was standing there describing it to him, I looked at it, and it dawned on me. I went to that match when I was eight years old. I had the privilege to be in the ring or work with everybody on that card. I thought, ‘How blessed am I?'”