WrestleMania weekend — or, really, WrestleMania week — is always very demanding both physically and emotionally. So many shows, so little time. From the Thursday before to the Wednesday after, there were 70 shows, and that’s not including the Hall of Fame ceremony or the Jim Ross show.

When I look back at the past week, there were a lot of emotional and heartfelt moments for me. Some that I shared with many of you, some I shared with just a few people. 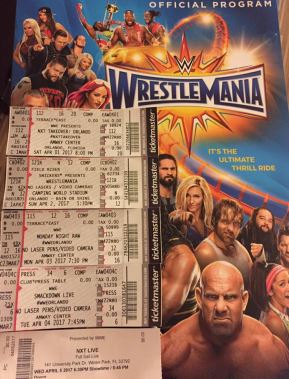 The obvious one is of course The Undertaker’s retirement. Although I’d have preferred to see Brock Lesnar and Goldberg end WrestleMania, I have to say that the visual of Undertaker’s hat, jacket and gloves in the middle of the ring is an image that I will remember forever. It’s a sad ending, but at the same time, something I will always be able to say I witnessed live. If you ask me, ‘Taker is the best character ever invented by Vince McMahon. He gave the fans so many memories, especially at ‘Mania, and even if his age is showing now more than ever, he will always be special every time he’ll come back. I’m usually not a big fan of going to the Hall of Fame ceremony live, but his induction would probably make me want to go, simply to say one last time, thank you ‘Taker.

Prior to the match, it was such a feel good moment to see Good Ol’ JR make his comeback to the company, especially given the tragic death of his wife a short time ago. It’s where he belongs. Too bad I couldn’t appreciate his return beyond that walk down the ramp, and it’s the only match that I will seek out to watch — and listen to.

A few hours before, we were treated with another great ‘Mania moment, the return of the Hardy Boyz. I mean, I can’t recall hearing a bigger pop, a bigger reaction than the one Jeff and Matt got when their music hit for the first time in many years. And I was there for Hulk Hogan and The Rock in Toronto at WrestleMania 18 and for Georges St-Pierre competing in Montreal. The expression “Hardy pop” took on all its own meaning. It was actually better than the match itself.

Also great was seeing Quebec’s Kevin Owens win the United States title from Chris Jericho — his fourth different title since he made his debut with the WWE. That brought up a different kind of emotion for me than ‘Taker or the Hardys. I felt proud. Proud for him but also proud for his parents, wife and kids who were all attending. You don’t reach that level of success without having the support of your family. We’ll have to have the SLAM! Wrestling intern look into it, but I suspect that winning four different titles (NXT, Intercontinental, Universal and U.S.) in the span of 52 months after debuting must be a rare feat.

If we move on to Monday Night Raw, the return of Kurt Angle was something very cool to see. It felt like he started exactly where he left a decade ago. The same facials, the same good lines, the same “You suck” chants. It just felt good.

Another feeling I had on Monday is respect. Respect for Roman Reigns, who like a boxer, took blow after blow from the crowd, without flinching. And all he needed to say to come back from that were five words. It was such a great segment.

Speaking of great segments, the next day at SmackDown Live, Shinsuke Nakamura’s debut would have won for pop of the week if it wasn’t for Broken Matt and Brother Nero. He didn’t say one word. He didn’t even wrestle (well, not on the live show). And he got the biggest reaction of both Monday and Tuesday shows. So awesome to see live. And his NXT farewell on Wednesday was another very touching moment.

And last but not least, Mania’s week was also special professionally speaking. For the first time, I was covering Mania and all its activities for the biggest French sports talk radio station in Montreal. And that’s on top of writing more than 10,000 words worth of articles. I’m not Jan Murphy by any means, but I take pride in what I did and it felt very rewarding. 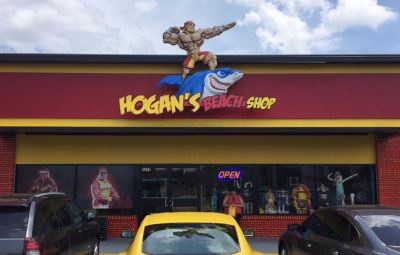 How busy was my week? I didn’t even mention a visit to Hogan’s Beach Shop in my story!

Also, at WrestleCon, I was selling my latest book, Sisterhood of the Squared Circle: The History and Rise of Women’s Wrestling, co-written with Pro Wrestling Illustrated‘s Dan Murphy, for the very first time. Writing a book is a very long process, especially with an established publisher. From the time you pitch an idea for a book to the time you can actually sell it for the first time and share your hard work with the whole world, there’s a good two years passing by where you read, and re-read, and re-re-read the whole thing. We got good comments from fans and workers and a lot of people were anticipating its release. We’re not getting rich at writing books, but the feedback is a big part of why we do it.

That was my WrestleMania week. Besides the matches and the great friends and fans I met in Orlando, it was a week full of emotion for me. And now that it’s over, I have one feeling left: sadness. I’m sad that this is over, but I find comfort when I think that the next one is “only” 365 days away!