CBS Sports is reporting that Canadian commentator Mauro Ranallo won’t be returning to the WWE.

According to CBS Sports and a source “close to the situation”, Ranallo is “not expected to appear on camera for the remainder of his WWE contract, which he signed on Dec. 15, 2015.”

Ranallo’s current contract with the WWE ends this August. 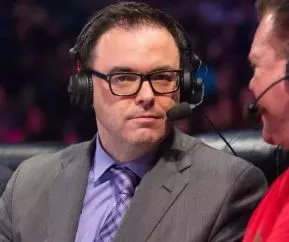 Over the weekend, Ranallo has deleted all WWE mentions from his Twitter account. Ranallo, who has suffered from bouts of depression throughout his life, has not appeared on Smackdown Live and 205 Live for a month and missed WrestleMania altogether.

Ranallo himself has not commented on the situation in any way other than to thank fans for their continued support and best wishes on Twitter.

On SiriusXM radio, Rutten commented on the situation.

“He’s doing okay. As everybody knows – he’s very vocal about it – Mauro is bipolar. Sometimes, a couple of times a year, things are going too fast and he needs to just simply slow down but he’s doing good.”

In his new book ‘Best Seat In The House’, former ring announcer Justin Roberts writes he was bullied by JBL and other WWE superstars in 2004.

Roberts writes about JBL: “He terrorized guys. It’s funny because people are bringing this up now because of the stuff going on now and the book release, but this was like 2003-2004; it was a long time ago. He terrorized me, and a lot of guys. He’d make life hell for a lot of guys. He chewed Miz and Morrison out after they won the titles for not celebrating enough. He was eventually let go back then, and when he came back he was a lot better, but he was mostly only showing up for TV. Even now, it comes across on commentary with how he is with Byron.”

JBL has responded on Twitter writing that he wishes Ranallo all the best and any comments were made as per his heel character.

Of Justin Robert’s statements in his book, JBL wrote: “I won’t answer Net rumors-but I didn’t take Justin Roberts passport. Could have been anyone/he was hated by the whole crew. He’s an idiot.”

It is estimated that 1 in 4 Canadians has a degree of depression serious enough to need treatment at some time in their life and that 20% of Canadians will personally experience a mental illness in their lifetime.

Ranallo told The Province newspaper that he would like his legacy to be as a champion of mental health issues.

“We should all aspire to leave a legacy on this planet and everyone has their own path, but for me, as much as I’ve accomplished professionally, I would like my legacy to be that I was a champion for mental health causes because I know personally what it has cost me in the loss of friends and coworkers and just the fact that so many people do struggle in silence and I don’t want that to be the case moving forward.”

“I know it’s cliché almost, but every Monday on social media, my first tweet is ‘Keep up the good fight! #MentalHealthMonday #EndTheStigma,'” he added. “Some weeks, I might get five or ten responses and others I might get more, but every response is the same – ‘Thank you; you just made me feel better on a rough day’ or ‘Wow – I never thought someone like you would struggle from that.’

“To me, that’s what means more than calling Floyd Mayweather-Manny Pacquiao or being at WrestleMania or anything else I’ve accomplished. To me, helping people and giving back is what we should all aspire to in this world.”