Kevin Owens over losses to Goldberg, Lesnar, ready for Mania and Jericho — and Montreal

In recent weeks, Kevin Owens has shared the ring with legends such as Goldberg, Brock Lesnar, and Triple H. He turned his back against his friend, U.S. champion Chris Jericho, who he’ll face at WrestleMania. However, coming back to Montreal is always special, as it is where it all started.

Montreal fans heading to the Bell Centre for Friday’s show were hoping to see the Universal champion wrestling in front of them, but fate intervened. On March 5, at the Fast Lane pay-per-view, Owens lost the title to former WCW and WWE champion Bill Goldberg in just 21 seconds. Fans may have protested the one-sided result, but to the former champion himself, it wasn’t a big deal.

“Working with Goldberg in any capacity was pretty surreal. I was never a Goldberg fan, I’ve said that many times. When I was a kid I was a WWE fan. So Goldberg to me was a Stone Cold rip-off. When he went to WWE in 2003-04, I never accepted him as a WWE guy. So to me it wasn’t like if I was in awe of getting to wrestle someone I looked up to when I was a kid,” Owens said in an interview with SLAM! Wrestling. “I get that feeling when I work with guys like Triple H or Chris Jericho, but I didn’t get that feeling from Goldberg. But it was still very surreal to be in the ring with him, knowing the career he’s had. As far as losing the title to him, it’s just part of the job. I know it upsets a lot of people, but in a way it’s very flattering to see how people got upset over me losing the title, but ultimately people have to look at the big picture. And it’s not my last title run. I’ll get to do this again.” 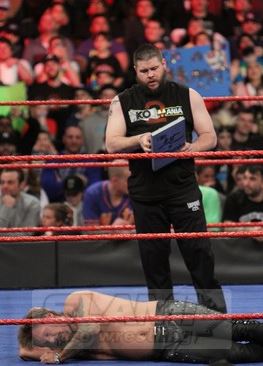 Kevin Owens checks over Chris Jericho’s list — with Jericho lying on the mat — on Monday at Raw in Brooklyn. Photo by George Tahinos

Still, Owens was able to get a 188-day reign as champion, something of a rarity nowadays.

“Yeah, I’m happy with the title run. There’s always things you wish were different, or things that could’ve been better or you could have done better, but ultimately for a first title run I think it went pretty well.”

And if some fans thought that losing to Goldberg in such a short match was a way for WWE to send a message to Owens, the 32-year-old grappler does not feel the same way.

“Every couple of weeks, or every week, I would work closely with Vince [McMahon] and Triple H and I was never led to believe anything else other than they were happy with what was going on,” he said.

In the span of seven days, Owens not only took on an icon like Goldberg, but he got to wrestle Brock Lesnar at Madison Square Garden in New York City at a live event. While he was not a big fan of Goldberg growing up, the feeling is different with Lesnar.

“Yeah, Brock Lesnar was someone I looked up to when I was younger. I was there in Montreal when he made his debut and I was immediately a huge fan,” Owens remembered. “To the point that the same summer Brock had made his debut, my parents got a brown Labrador and I named it Brock. And it was very telling of the future, because that dog beat the sh– out of me and that’s exactly what Brock did to me. It was a thrill to wrestle him, a thrill to be in the same ring as him. He’s something else. He’s a different kind of competitor. It’s definitely something I look forward to do again.”

Working main events and winning championships is something many wrestlers get to do in their careers. But having your own documentary, to be shot for your WWE-produced DVD, is something just a handful of people will have the chance to do. Even though he only started with the company in December 2014 (with NXT), it was recently announced that next July, Kevin Owens will be part of that select group.

“They came to my house and shoot some footage with my parents. They followed me around for a couple of months at various events. They were there the night I won the title. They were there for my first WrestleMania. I’ve seen a rough footage and it’s really, really something. When you’re a wrestler trying to make it to the WWE, you envision a lot of things, and I always envisioned WWE making a documentary like that about me. So to actually have it happen so quickly is pretty thrilling. I think anybody who’s followed my career for a long time will really like it, and anyone who’s only been following my career in the WWE will find a lot of stuff about me.”

On April 2 in Orlando, Florida, Owens’ second home since he has lived there for almost a year beginning with his time in NXT, he will face his former best friend, Chris Jericho, for the United States title. This is a match many fans have been waiting for. The build-up started last September when the two of them became “best friends” and it took a turn for the worse when Owens turned on Y2J during the incredible segment that became the Festival of Friendship on Raw. 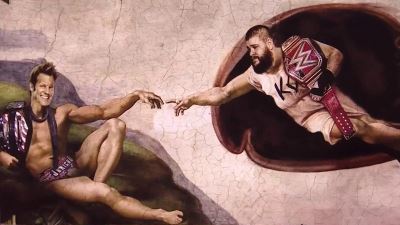 Owens was really happy with the segment but the real question remains — did he keep that awesome painting dubbed “The Creation of Kevin”?

“The painting that was used in the ring is now in the props truck,” Owens said. “The props crew is the one who made the set for the Kevin Owens show. Every time you see a set like the Highlight Reel or Miz TV, the props guys are the ones taking care of it. So the painting is now hanging on the ceiling of their truck. It’s pretty impressive.”

WrestleMania 33, or as he calls it, KOMania 2, will be Owens’ second Mania match, but his first one-on-one (last year he was in a multi-person ladder match), and he’s really looking to make his mark.

“Well, it’s WrestleMania so everybody is looking to steal the show,” Owens said. “Of course, either it’s WrestleMania or a live event in Syracuse, New York, I’m making sure people leave the building remembering what I did that night. I always want to be the standout of the show. So I’ll have that same mentality at going to WrestleMania.”

“The exciting part about me and Chris’ match, is that people are emotionally invested into and it’s a fresh match, it’s not a match that happened before. We wrestled a couple of matches here and there, and because of the nature of what we do, some matches tend to happen quite a few times, even before they end up on pa-per-view. Me and Chris have had a limited amount of time in the ring and it helps making it very interesting and I really like that part of it.”

However, before wrestling under the palm trees of the Sunshine state, Owens will be wrestling under the cold of his hometown in Montreal Friday at the Bell Centre. The announced match is him against another former best friend of his, and fellow native of La Belle Province, Sami Zayn. The two of them ruled the independent scene not too many years ago and even though it was announced last July that they would not be wrestling against each other any longer, that never came close to ending.

“Our Battleground match was meant to be the last time, but it definitely ended up not being that. It just comes down that when the two of us are in the ring together, you know it’s going to be good and that’s what WWE is looking for. And now we’re doing it again at the Bell Centre, unless the card changes, which could always happen. Every time we’re in the ring together, good things happen, so that’s the only explanation why our last match wasn’t our last match. And it won’t be. Even before WWE, we would always find our way back to each other, so it’s gonna happen many times again, I’m sure.”

It’s a good follow-up to their last match together at the Bell Centre, in March 2016, the first WWE show in Montreal main-evented by two local talents since Jacques Rougeau Jr. took on Pierre-Carl Ouellet in 1994.