If it’s every WWE superstar’s dream to have a WrestleMania moment, then surely Mick Foley has achieved that dream several times over. Whether it was his main-eventing WrestleMania 2000 in a 4-way for the WWE Championship, his 2004 match where a reunited Rock ‘n’ Sock Connection took on Evolution, or his 2013 come-out-and-wave moment as a new WWE Hall of Famer. But it’s two other big moments that Foley counts among his favourites.

“I’d say the match I had with Edge in 2006 is hands-down my favourite WrestleMania match,” he told SLAM! Wrestling. 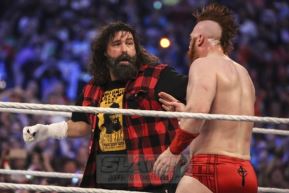 In that segment, Foley joined fellow legends Shawn Michaels and “Stone Cold” Steve Austin for a beatdown of the League of Nations. While this served primarily as a fun, nostalgic moment for the fans, it was Foley who really savoured the experience.

“I took my time on my way out there, looked all around at those people, and realized I’d never seen that many people before and probably never will again, and I just tried to enjoy that moment. (When I went out), the nerves kicked in, I (got) that rush. In the dressing room afterwards, hanging out with the guys, it was a great feeling. I really enjoyed myself.”