Mat Matters: Anthem has a long road to Make iMPACT Great after reset

TNA is dead after last Thursday’s edition of IMPACT Wrestling. The company re-branded to the same name of their television show, with Anthem Sports & Entertainment taking over ownership and a slew of new and old faces taking over the day-to-day operations of the company.

With all the changes and newfound optimism for the company after escaping the business quagmire former TNA President Dixie Carter left them in, the on-screen product felt more like the more things change, the more they stay the same.

IMPACT last week featured over two hours of Jeremy Borash and Josh Mathews arguing back and forth. Yes, two announcers going back and forth with snide remarks over matches, over storylines, into commercial segues, you name it. Debuting wrestlers integral to the new product were shouted over. New title belts being introduced to provide credentials to talent weren’t even mentioned. No, it was more important for Borash and Mathews to fight over who legendary commentator Jim Ross liked more. 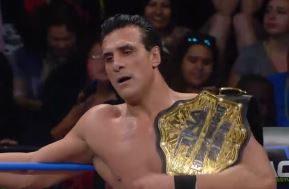 Though it was tough to parse much over the commentator feud that had triggered flashbacks of some of the more inept creative years in company history, the show also featured some real head-scratchers in front of the camera. Alberto El Patron captured the IMPACT World title from Bobby Lashley on the night of his debut. While not entirely indefensible despite it damaging a great monster run from Lashley, it came on the heels of the company making a point to repeat that this isn’t the run of the mill wrestling product you could expect from WWE weekly.

What better way to prove that than have a talent take your world title coming off an acrimonious split from the company you are trying to create competition with?

Combine this with dragging promos from Bruce Prichard and Dutch Mantell and the intended explosive debut of a rebooted company went off like wet fireworks.

Behind the scenes, it doesn’t get much better.

The bloodletting of talent is to be expected as IMPACT attempts to regroup and rebuild, but the inability to come to terms with The Hardys, who have revived their careers to become the undisputed most popular act outside of WWE with their “Broken” universe, has become particularly controversial. IMPACT sent a cease and desist to Ring of Honor before its 15th Anniversary pay-per-view that ROH World Tag Team Champions The Hardys were performing on, claiming intellectual property of all things “Broken.” While Reby Hardy (Matt’s wife) spit venom on her Twitter account, the two sides allegedly came to terms going forward.

The damage from the drama surrounding the split is already done, but it gets a little more confusing when you consider that “Brother Nero” Jeff Hardy, after the parting of ways and being written off TV last week, is headlining this month’s One Night Only pay-per-view, scheduled to air Friday.

When it rains, it pours.

With all that bad news, it should be noted that alternative products always bring out the best in professional wrestling historically and IMPACT has reported some upsides already.

Building on the strong 2016 it had, IMPACT reported in a press release that the “viewership on the IMPACT Wrestling YouTube channel and other social media outlets exploded, with new content attracting more than 2.4 million views through the weekend, an increase of more than 275% over the same period last week.”

IMPACT also is going international, already partnering with Pro Wrestling NOAH in Japan and Crash Lucha in Mexico, while announcing an “agreement with its partners in India to begin taping in India. On May 30 and May 31, episodes of IMPACT Wrestling will be taped in Mumbai to be aired in the four weeks leading up to Slammiversary. Discussions are now underway with local sponsors and promotions to launch a new show featuring local talent in association with the IMPACT Wrestling roster to be filmed in India commencing as early as Q4 2017.”

Still, one step forward and two steps back is a formula for the TNA of old and it is something that IMPACT viewers have slowly recovered from after a strong past year or two creatively for the company.

For Anthem, making IMPACT great will be a long road if they choose to rely on nostalgia both on and off the camera. Trying to purchase already-built stars and calling back to “great” times that simply were not so is part of the formula that got IMPACT in the hole that it needed to be rescued from in the first place.

With promising boosts in online media, a wealth of cornerstone talent already signed, and international deals rolling it, IMPACT will need to learn from this first set of TV tapings if this rebooted edition doesn’t want to be sent back to the manufacturer. Permanently.