Dennis Stamp, who died today, March 14, 2017, at age 68 after battling cancer, was the epitome and a journeyman wrestler. In the parlance of the era he worked, the 1970s, that meant he could work with anyone, any style, any territory.

Wins weren’t important. Making others look good was what mattered. 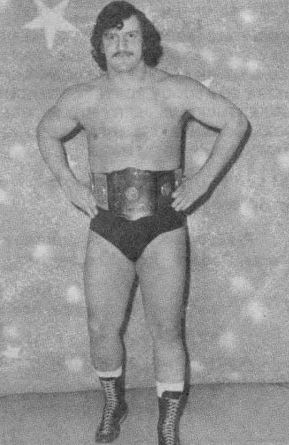 “He was fun to be around,” said Jerry Brown of the Hollywood Blonds about Stamp. “When you wrestled him, he didn’t bitch or gripe about anything. You went out there and wrestled.”

Born December 6, 1946, in Brainerd, Minnesota, the 6-foot-2 Stamp went to Concordia College, in Moorhead, Minnesota, where he excelled in amateur wrestling as a heavyweight at 191 pounds. He won the state small college championship in both 1967 and 1969; in 1968, he took sixth in the national NAIA tournament at the same weight.

He trained with Verne Gagne in Minnesota, and debuted as a professional wrestler, usually going at about 210 pounds, on August 9, 1971, in Thunder Bay, Ontario.

“Dennis was actually a good wrestler, with some amateur wrestling background,” wrote Terry Funk in his autobiography. “He was a solid worker and did not rely on gimmicks, or anything. He believed that straight wrestling was the way to go.”

That amateur background never left Stamp, and he continued to work with amateur wrestlers in his adopted hometown of Amarillo, Texas, with wife Debbie and their family, and was an amateur wrestling referee.

Through the 1970s, the road was Stamp’s home, though, and there are few territories in North America where he didn’t appear for at least a brief time. He held tag team titles mostly, including the belts in Vancouver in 1975 (with Tiger Jeet Singh), West Texas (with Davey O’Hannon and Al Perez in 1976), and in 1973 with Dewey Robertson in Mid-South.

It was there in the sprawling territory from Oklahoma to Texas to Louisiana that the Hollywood Blonds of Jerry Brown and Buddy Roberts fought Stamp and Robertson. 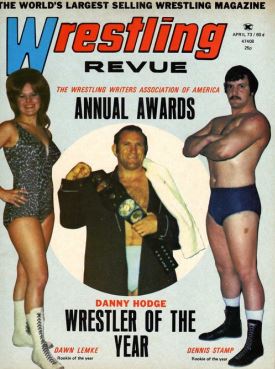 Dennis Stamp on the cover of Wrestling Revue in April 1973.

In a 2003 interview with Robertson’s biography, Meredith Renwick, Roberts talked about the team of Robertson (well before his days as The Missing Link) and Stamp. “They were a great technical team. They weren’t just muscleheads, they had wrestling knowledge,” said Roberts, recalling a bought where the teams fought for 90 minutes. “It was in New Orleans, we had the hour-and-a-half, no falls at all, whatsoever in a total of 90 minutes, it was nonstop and the fans never stopped reacting. It was – we always got a reaction from beginning to end, which is very unusual for an hour-and-a-half draw match. Very unusual, it was in New Orleans, I remember it clearly. That’s one of the clearest matches I remember in my life because of the time of it and the quality of the match.”

As a singles wrestler, Stamp had a decent push in California, where he was the Beat the Champion, 1974-75. According to Dave Meltzer of the Wrestling Observer, Stamp “was used as the territory’s policeman (his job outside the ring was to rough up fans who wanted to become wrestlers)” in California.

As the territories dried up, Stamp found himself as an underneath performer for the WWF and AWA. Amarillo was his home and he ran a bug-spraying business. As well, Stamp took bookings as a referee, and was the man in stripes for one of Terry Funk’s many retirement matches, this one against Bret Hart.

That connection to Funk and Amarillo is also why Stamp ended up in Barry Blaustein’s documentary, Beyond the Mat. He’s shown bouncing on a trampoline with weights, staying in shape for whenever that next booking would come. 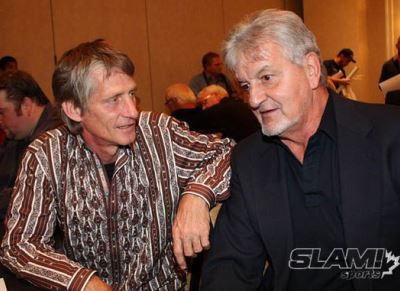 Kevin Von Erich talks with Dennis Stamp at a fan fest in 2009. Photo by Christine Coons

Stamp lived for wrestling, amateur and pro, and told the Amarillo newspaper as much in 2015: “It’s the only time I’ve really ever been alive,” said Stamp. “There’s no place I’d rather be to this day than in the ring.”

He collected a number of his tales from his life in wrestling for a self-published book, The Stamp Collection.

In 2011, he faced down Stage 4 non-Hodgkin lymphoma, and beat away the cancer with chemotherapy. In recent months, though, news circulated that he was ailing again. Dennis Stamp died March 13, 2017.

Details of the funeral are not known at this time.