The overlooked career of Karen Kellogg

In December of 1961, women’s wrestling promoter Billy Wolfe wrote to publisher Stanley Weston, who would go on to start Pro Wrestling Illustrated magazine, informing him of “the greatest female wrestler in history.” 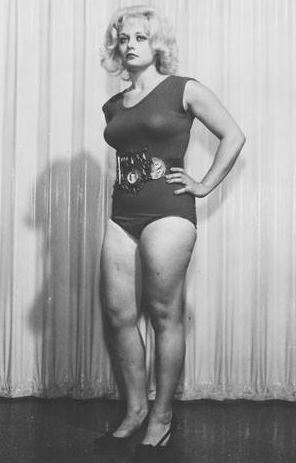 “Her name is Karen Kellogg,” wrote Wolfe. “And I can assure you that you will be hearing a great deal about her in the near future.

“Karen weighs only 118 pounds, but I venture to say that there isn’t a woman in the world within fifty pounds of her weight who can pin her. Karen is dazzling fast, very strong and she has learned the finer points of the sport faster than any girl I have ever developed with the possible exception of my famous all-time champion, the great Mildred Burke.”

While Wolfe’s boast didn’t exactly come true, she did become a wrestler, and her tale came to an end when Kellogg died on February 10, 2016, at the age of 74.

A curvy, blue-eyed blonde, Kellogg could be seen as Wolfe’s last hope of recapturing glory by creating another famous female wrestling star as he had done previously with women including Burke, Nell Stewart and June Byers. Born January 6, 1942 to Earl and Thelma Kellogg, Karen’s wrestling journey began when she was 12 years old at her family’s farm in Charles City, Iowa. Upon seeing Big Time Wrestling on the family’s first television set, she was instantly smitten and became obsessed with all things professional wrestling.

“She had become inspired and never deviated off of that,” shared Tim Kelly, the biological son of Kellogg and Wolfe, in a phone interview from his home in Columbus, Ohio. “She watched all the wrestling matches on TV and she was training and exercising, reading books, always looking for people to wrestle.”

For Kellogg, those people would include her five siblings and friends, some of whom would refuse to play with her anymore because as her skills improved their chances of getting hurt increased. Early newspaper accounts on Kellogg report that after high school she went against her parents’ wishes to become a secretary and convinced her father to loan her the money to pursue her true dream. Kelly says she eventually learned that if she wanted to make this dream a reality, she needed to contact Wolfe.

The notoriety of Wolfe has been well documented. His many relationships and marriages with his female wrestlers, most infamous of all with Burke, gained him a reputation as a womanizer and an exploiter. Kelly adamantly denies that Wolfe exploited Kellogg.

“She traveled across the country to find him,” explained Kelly. “He didn’t find her! She asked around like, ‘I want to be a professional wrestler, what do I do?’ She eventually came across somebody that knew the business enough to say, ‘You have to see Billy Wolfe.’ Before Billy Wolfe even knew she existed, she’s already made up her mind that she’s going to find him and travels to Columbus. So somebody shows up at your door and says, ‘Hey I want to join your club,’ it’s hardly a story of exploitation or somebody down on their luck. The other thing is that she had been training since she was 12 on her own! Here she is after some years of already training and learning how to wrestler, it would be for Billy a no brainer.”

Kelly stops to chuckle and offered further, “Definitely from my mom’s perspective, Billy couldn’t stop her from showing up. I can only imagine if Billy said, ‘I don’t know.’ She would have camped out and said, ‘No! This is my dream! You are not going to stop me from doing this!’ So the suggestion at least in terms of Karen that he exploited her, you got to be kidding me! There was nobody else in the world who could offer her, her dream.”

While it is easy to demonize Wolfe, Jeff Leen, a Pulitzer Prize-winning Investigations Editor for The Washington Post and the author of the definitive Burke biography, The Queen of the Ring – Sex, Muscles, Diamonds and the Making of an American Legend, says Wolfe was an excellent and successful judge of wrestling talent.

“He (Wolfe) would not have picked Karen lightly,” stated Leen in a phone interview. “He knew wrestling and he would have picked somebody who had the physical talent, had the dramatic talent and had the looks. I think that’s what he did with Karen and from what you can see in pictures, she looks the part. And from the descriptions of her in the ring, she knew the holds, she was fast and she had technical talent.”

Leen, who spent 10 years researching, interviewing and writing his book on Burke, continued, “He was always looking for the next Mildred Burke as the ’50s moved on and Mildred, Nell and June were his great stars and the great draws to women’s wrestling. He knew what he needed to succeed. He would not have picked somebody who was pretty and would sleep with him and then try to sell her as a female champion wrestler because he knew what it took better than anybody.”

Kellogg would begin training with Wolfe and not long afterward won the women’s lightweight championship on November 3, 1962, in Bluefield, West Virginia at the Municipal Auditorium. It was an all-girl show, and she beat Jane Conrad and then Lola LaRay for the title. In its report on the match, Ring Wrestling said that Kellogg :has a remarkable series of moves that include versions of the scissors, rolling step-overs, spin wheels, hammerlocks, flying mares, and airplane spins.”

Despite a 47-year age difference, Wolfe and Kellogg became a couple. On March 7, 1963, Wolfe died of a heart attack. Without Wolfe by her side, Kellogg’s wrestling career would also come to an end as she felt other promoters didn’t hold women’s wrestling in the esteem that Wolfe did. According to Leen, who obtained all of Wolfe’s marriage records, Kellogg and Wolfe did not marry. (Kellogg would go on to marry Bob Heuton in 1976. According to her obituary she and Heuton had two daughters, one of whom died in infancy.)

But Kellogg and Wolfe did have a son, Tim Kelly, in 1961 whom they placed up for adoption. According to Kelly, Kellogg didn’t feel that she could be both a mother and a wrestler. His adoption paperwork was processed two weeks before his birth. Remarkably, Kelly learned he was delivered by the county coroner, who was a friend of Wolfe’s, as a favor. He acquired his birth certificate and learned his mother was named Karen Kellogg. He set about searching for her. Not being a wrestling fan, he was shocked during a late night internet search to find the name appear on a women’s wrestling website. But an even bigger revelation was waiting for him when he came across a telegram on the site. It was addressed to Wolfe from an athletic commission regarding the outcome of a recent women’s match. The telegram was sent to Wolfe via the Park Hotel, his unofficial headquarters. It was the same address on Kelly’s birth certificate.

“What a thing to hit you at two in the morning when you are already four hours past bedtime,” exclaimed Kelly. “I was up the rest of the night! I went back to the picture of Karen Kellogg and I’m like, that’s my mom! What are the odds? It has to be!”

Kelly, now 55 years old, was in his late 30s when he and Kellogg were reunited through an adoption registry.

“She was very lively, very fun,” remarked Kelly of his first impression of Kellogg. “She’s a very fun loving kind of person. She liked to joke around and laugh. She’s very adventurous. It’s not surprising that she’s the kind of person who would end up being a professional wrestler!”

He further reflected, “She had a zest for life! Most people hold back. Most people are always holding back, always worried about all these different things and staying in a small box. Even after all these years and being in a nursing home, she was herself. She would be in the moment and enjoy it! It was fun to be with her.” 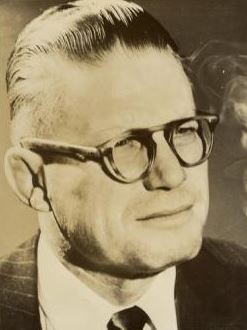 Kelly says he asked Kellogg point blank who his biological father was and she told him it was Wolfe as she hadn’t slept with anyone else.

Kelly and his mother kept up their relationship until Kellogg’s death. He enjoyed sending her flowers for the holidays alongside her favorite soda, caffeine-free diet cola. During their many conversations, Kellogg would also talk fondly of her wrestling days and of Wolfe.

“Just talking to her and her just thinking about it, just to relive those experiences made her so happy,” revealed Kelly. “She had no regrets at all. Things didn’t go right, but she didn’t complain about that so much. She had her golden age, her time. It was comforting to me being their child to see that she was still so in love with him (Wolfe). Even though I was put up for adoption, I wasn’t an accident. They were truly in love with each other.”

While Kelly says it’s obvious Wolfe was a womanizer, he adamantly disagrees with the negative narrative of his father’s legacy especially the one featured in Ruth Leitman’s documentary, Lipstick and Dynamite, Piss and Vinegar: The First Ladies of Wrestling.

“I’m not saying Billy was a great man, I really don’t know,” offered Kelly. “I mean he was a great man in the sense that nobody else had achieved what he did in the sport. It just seemed that the idea of trying to portray him as an exploiter who didn’t treat his wrestlers right, that’s just preposterous. Karen told me that they stayed in the best hotels, they ate at the best restaurants, wore the best costumes. He put the money back in the operation.”

Leen also points out that all the women who approached Wolfe wanting to be wrestlers didn’t naively go into the venture. They also eagerly sought the fame and the stardom that came with it. 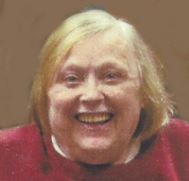 Karen Kellogg in the photo that ran with her obituary.

Leen reflected, “Was there some preying on them for sex? I’m certain that’s true, but the thing about Billy is he was surrounded by women and he took his shot at them when he could, but he had a large number of gay wrestlers and they just said, ‘Sorry, I don’t like men.’ And that was fine with him. Mae Young was one of those. And there were some women who said, ‘Well, he propositioned me, but I refused to sleep with him.’ It might be true that their careers could suffer because of that, that they wouldn’t get to be in the position that June and Nell were, but it also might be true that they didn’t have the talent. These were people who were using each other and definitely he was in a position of power over these women, so it’s an unfair relationship, an unequal relationship in some respects, but it wasn’t a pure predatory relationship where he was using these women and they were not getting anything back.”

Concluded Kelly, “She (Kellogg) was an amazing person. I think it’s great that she lived her dream. Unfortunately it didn’t go for as long as it should have with Billy passing early like that. She was a great person. She had the kind of personality you wish everybody had on a certain level. Just being able to enjoy life for what it is.”