Although Toronto is often called “Bizarro-Land” as a result of the fans’ tendency to boo the heroes and cheer for the villains, Mick Foley — no matter what character he was playing at the time — was pretty much universally loved. Fans will get the chance to see their hero in person, as Foley will be in town as a celebrity guest — along with his daughter Noelle and Canadian legend Bret “Hitman” Hart — at the Toronto Comic-Con.

Safe to say that Foley will be faring much better at that venue than he did this past Monday night on RAW where he was on the receiving end of a verbal and physical beat-down by his on-screen boss, Stephanie McMahon, and her husband Triple H. For Foley, that kind of interaction was exactly why he returned to TV in the role when the offer was extended. 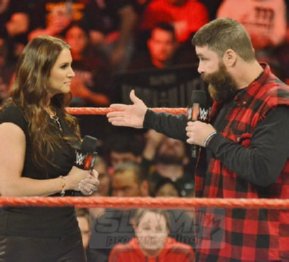 “(I saw) the potential to do really cool stuff with Stephanie,” he told SLAM! Wrestling in an exclusive interview, from his Toronto hotel room just hours before his appearance at the convention. “And as much as I getting along with Stephanie, nobody tunes into Monday Night Raw to see people getting along. I always knew there was some potential do to captivating things. I think we hit one of those on Monday night.”

Ultimately, the segment served to further the feud between Triple H and Seth Rollins, which appears to be heading towards a match between the two of them at WrestleMania. To that end, Foley hopes his involvement will help in building the fans’ anticipation for that match.

“I didn’t have a bond, on-air, with Seth Rollins the way I had with other guys, like Sheamus and Cesaro, Sami Zayn, and Jericho. I thought Monday night did a really great job of creating that bond. And I hope that it will add another layer to their rivalry.”

Whether or not Foley will be back on TV this coming Monday, to further the feud, or continue his uneasy relationship with Stephanie remains to be seen.

“I don’t think I was officially fired. I never heard those words — and she’s really good at saying them — so I imagine if they really wanted me gone, I would’ve been. So we’ll just wait and see. Sometimes things take on a life of their own, and who knows where the road may lead us.”

But even if that road doesn’t lead back to RAW, Foley won’t have complaints about the way he went out.

“I look at Monday night as one of the favourite things I’ve ever done,” he said.

That’s a major statement, when you consider the legacy that Foley has created for himself. The list of his accomplishments is, frankly, too long to print here. With the newest one being his upcoming induction in the Pro Wrestling Hall of Fame as part of the class of 2017.

Foley is grateful for the honour, naming the PWHF as one of the few major ones that he hasn’t already been inducted into, referencing his previous honours from the WWE, Cauliflower Alley Club, National Wrestling HoF, and the Wrestling Observer Newsletter HoF.

“I’m really lucky that people have thought well of my contributions,” he said humbly, “and I’m proud to be in all those great groups of people. (When I first started), I wasn’t looking to establish a legacy at all. I was just looking to create some moments and live out my own dream. I never would have dreamed that 32 years down the road, I’d be honoured for the contributions I’ve made.”

Foley will be at the induction ceremony, which caps off the celebrations, taking place May 18 through 20 in Wichita Falls, Texas.

“It will be the first time flying after my scheduled hip surgery,” he confirmed. “So I won’t be 100%, but I will be there. ”

It’s those damaged hips, along with other lingering injuries, that have contributed to Foley’s less-physical role on TV as of late. And the legend acknowledges that he won’t be doing any more matches in the future, and seems to be at peace with that.

“I’ve been told by a couple of really respected neurologists that my wrestling days are over, and I’m going to respect that and just enjoy myself within those parameters.”

“I came back at WrestleMania when I was strictly on the offense. But there’s no way I could ever have a match (again). I’ve more than fulfilled every itch that I had, wrestling-wise. Every once in a while, I get to do something really special, like what I did on Monday night, and then I’m good for a while. Then, in December, I put on a red suit, and get to create all sorts of smiles and emotions, and that’s really good enough for me.”

In the meantime, Foley enjoys his current on-screen GM role, as well as other creative opportunities, such as his role as a wrestling promoter in the upcoming movie, Chokeslam, which will be released in select Canadian cities over the next couple of weeks (look for the review on SLAM! Wrestling soon).

This includes a potential second season of the reality show he did for the WWE Network, Holy Foley, which also featured his daughter Noelle, who will also be at the Toronto Comic-Con this weekend.

“I know WWE was really happy with it,” he said, about the show. “I think it performed very well for the network. And we loved doing it. In terms of a second season, I’d say we would be open to it. (But there are no plans yet) that I know of. We’ll cross that road when we come to it.”

Regardless, of what comes next, it’s safe to say that Toronto fans will still be on his side.

Toronto Comic-Con runs today through Sunday at the Metro Toronto Convention Centre. Mick and Noelle Foley will be appearing all three days.