If all this autobiography — Bad to the Bone: 25 Years of Riots and Wrestling —  was about was Ron Starr’s experiences in Vietnam, his family struggles, and overwhelming health problems in later life, it would be a worthwhile read. Insofar as he tells the story of a dying breed — the territorial-era fan who lived his dream to become a wrestler and travel the world — this is an essential volume for any true fan of the business. The fact the foreword is written by Mick Foley, who credits Starr with teaching him the art of brawling in a brief 1989 feud, demonstrates the respect he earned in the sport.

Starr carved out an upper-card career throughout the southern United States, Puerto Rico and across Canada over the course of about 18 years, and his recall of the lifestyle, matches and promotional wars make for an engrossing read, helped in part no doubt by co-writer Rock Rims. Starr explains the lifestyle in every area he went to vividly and with a great understanding of the nuances of each community. 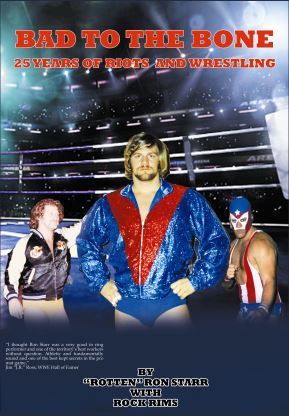 Born Bobby Nutt, his love of wrestling came from his mother who was a regular at the Atlanta City Auditorium on Friday nights. He witnessed stars like Freddie Blassie, All American Ray Gunkel, and Dickie Steinborn and came to appreciate the athletics as well as the showmanship. Ron tells of his family life, the only son among five sisters, and he is very frank about the family tensions and troubles including a near-fatal fire. Sports (including wrestling and football), football, dating — a cousin of actor/singer Jim Nabors no less — and his rock band dominated his interests until March 1970 when basic training began and the U.S. Army shipped him to Vietnam.

Living in sandbag and lumber-reinforced tunnels, the close calls from snipers, booby-traps, ambushes, and downplaying of U.S. casualty counts led Starr to believe “after six months I had already been convinced that all the efforts and lives lost were a complete waste of time.” So of course he was involuntarily re-upped for another year with the 610th Army Engineer Co. His knowledge and description of guns, ammo and battle are alone worth reading to understand why he says the film Apocalypse Now best depicted military life in Nam.A returning vet had few career opportunities and were derided by anti-war activists, but Starr got his break into the local promotion after being noticed by Buddy Colt and Billy Spears in the gym. He paid his dues after training with Al (brother of famed Mexican trainer Diablo) Velasco. Starr talks about the night Gunkel died after a match with Ox Baker, and almost immediately became part of his widow’s All South group that went to war with the backstabbing NWA partners of her late husband. Starr learned the art of storytelling and making people believe, and bouts against Buddy Roberts taught his the importance of trusting his opponent. The names he met in his early years show how much true talent there was in the less remembered southern territories.

Starr then hit the road to Florida, learned a lesson in the ring from soon-to-be champ Jack Brisco, and assumed various guises elsewhere such as Phil Golden’s small time promotion in Kentucky and West Virginia and was eyewitness to Lanny Poffo’s famous parlour trick. In Oklahoma he volunteered to put over a very green Bob Backlund and tabbed him a future world champion, and felt the inhuman grip strength of Danny Hodge. In Texas as Matt Gibson, he didn’t feel Fritz Von Erich promoted him fairly.

“I will tell you this, if I didn’t become friends with Ron Starr when I was a teenager, there would be NO Michael Hayes — hence no Freebirds.” Michael P.S. Hayes, Pro Wrestling Hall of Famer, WWE Agent/Producer.Chapter 11, “The Best Kept Secret in Pro Wrestling” is his memories of the Gulf Coast area and the Fields/Fuller clan, and developing friendships with Ken Lucas, Rip Tyler and Andre the Giant. A surprising story is his tour of Guatemala and wrestling legends Karl Gotch and Lou Thesz. Gotch soon booked him into Japan where his competition was Antonio Inoki, Sakaguchi and Kobayashi. All this was in his first five years of wrestling. There were also short stints in Crocketville (the Carolinas), Florida for Eddie Graham and a fun run under a mask as Mr. Wrestling in Kansas City, where he came up with the drill sergeant character for Bob Slaughter. It was on one tour in KC that the father of the late Bobby Shane gifted Starr with one of his son’s ring jackets, and it’s where he played a tremendous rib, involving barbecued ribs, on the “typically inconsiderate” Bulldog Bob Brown.

The Los Angeles territory is where Starr met Roddy Piper (ribbing him plenty a few years later in Portland). His time in San Francisco is very detailed and colourful with old vets Dean Ho and Red Bastien immediately helpful with his good guy push all the way to winning the annual Battle Royal in 1978. Especially interesting was the skirmishes between the State Athletic Commission and promoter Roy Shire. By that stage Ron was a known entity in the business, with his travels to Portland and duck hunting with Dutch Savage, becoming a substitute Spoiler in Los Angeles, over 15 years of travel in Canada including Vancouver, Calgary and the Maritimes, and winning tag titles with ‘cousin’ Chicky Starr in Puerto Rico, and the night Bruiser Brody was murdered, still ahead of him.

He was even the third member of the Midnight Express in its earliest iteration in the Southeast for the Fullers, which led to his first meeting with future Stampede partner in the Memphis Mafia, the Honky Tonk Man Wayne Farris.

Canadian fans will certainly find his take on Stampede wrestling of interest, with the back story of his match with NHL tough guy Dave “Tiger” Williams, Dynamite Kid shooting on him, and Bruce Hart giving him the “pat of death (on the back),” a precursor to Hart’s notorious habit of killing dead any push for a wrestler who got too popular. Moving east, having to deal with tough-guy fans in New Brunswick taking cheap shots at him resulted in some heat from promoter Emile Dupree, but one wonders what else he expected his top heel and a real-life tough guy to do?

One aspect Starr mentions is bullies in the business, the worst of whom was Wahoo McDaniel, as opposed to a genuine tough guy he admired, Harley Race who challenged Wahoo in a dressing room. A near-shoot in the ring with Mil Mascaras and confrontations with two Guerrero brothers illustrate how egos could clash without great provocation. Crazy personalities abound in his tales and never fail to amuse, even mentioning a UFO sighting.I jumped at the chance to review the book because so many of my friends in the Canadian wrestling business had spoken in glowing terms of Ron Starr as a solid worker and friend, and in my earliest days with an outlaw promotion, to us his name was known for standing up in a court proceeding against Oklahoma promoter Leroy McGuirk and “exposing the business” after being screwed out of the NWA Junior Heavyweight championship payoffs he had earned. The story of that lawsuit and a proposed shoot winner-take–all match for the belt, and an attempt to blackball Ron, is also worth the price of the book on its own. He weaves his personal story — tragedy in his family, his troubled relationship with his children, a startling revelation of a daughter he had in the ’80s with a famous girl wrestler — through all the chapters; the enduring love and support of his wife Jackie after their days on the road ended and his health tragically declined is remarkable. Reading his life story has grown my admiration for Starr and his ability to persevere against all odds is a lesson for us all.