With his full-length fur coat, the rings adorning every finger, and immaculately applied make-up, fans can be forgiven if they are a little surprised by the radical transformation of one Aron Rex on Impact Wrestling.

“So, I get bored really easily,” laughed Rex about his decision to trade the no-frills persona he entered Impact Wrestling with for a more flamboyant, Liberace-inspired character. 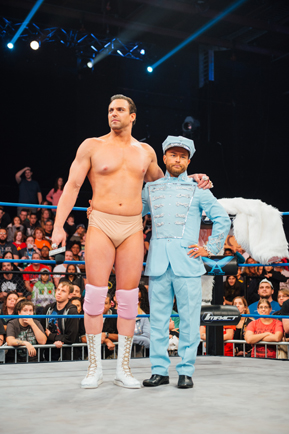 “I am lucky that I have created a unique niche within the industry for myself. I am the guy who has multiple personas and for some ungodly reason the fans accept that,” Rex chuckled.

Rex says he made the change because he wanted to challenge himself. He wanted to see if he could take on a flashier, glitzier persona and do it differently than anyone has before. Rex is under no illusions. He has stiff competition. Fans remember the likes of Adrian Adonis, Gorgeous George, Goldust as well as a host of others who have embraced more colourful and oftentimes outrageous personas.

Rex is aware some may take his impression of sorts the wrong way. He would like to assure those people the character is an homage of the highest order.

“In my mind, I am paying tribute to Liberace. Let’s face it; this gimmick is 80 percent Liberace, probably more than that. It really is me being Mr. Showmanship and drawing inspiration from in my opinion one of the greatest performers to ever live. If you look at what Liberace did, how he changed the face of television with his show, how he changed live entertainment, he was ahead of his time,” Rex said. “If the persona gets people talking about Liberace, if people who didn’t even know who he was start looking him up, that’s great. Regardless of someone’s life choices, I view people as people. I am hoping, maybe in some small way, the persona will help people move past the stereotypes that they have.”

A crucial part of the Mr. Showmanship character is Rockstar Stud who acts as Rex’s personal assistant. When Rex was signed by Impact, he knew right away he wanted to work with Spud. Both were trained by Rip Rogers.

“Anyone who has trained with Rogers, there is this weird kinship because of Rip’s unique style. Spud and I just instantly hit it off,” Rex recalled. “When you are producing a TV show, how you can you not utilize Spud? He is so talented.”

Although their act is fairly new to viewers, Rex compared Spud to The Miz as far as their on-screen chemistry and timing goes. Spud just had to get used to how Rex works in front of the camera. 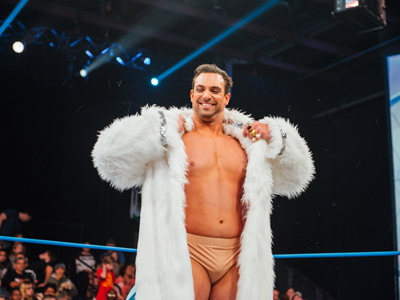 “I don’t talk over a lot of stuff beforehand. When we started working together, I told Spud, ‘I hope you don’t mind this but a lot of my characters I cannot and won’t plan. It is not like I don’t care. It is just when we are out there; we have to live in the moment.’ I trust Spud,” said Rex, formerly Damien Sandow in the WWE.

Rockstar Spud will be more than a one-man Mr. Showmanship cheering section tonight though as he teams with Aron Rex to take on Jesse Godderz and Badd Bones on the One Night Only: Joker’s Wild pay-per-view.

Rex also credits Dutch Mantel with shaping the Mr. Showmanship character into what it has become in such a short period of time. Mantel and Rex became friends during their time in the WWE — where Mantel was manager Zeb Colter — and that partnership has grown in Impact Wrestling.

“Just in terms of being a human being, Dutch is a great guy with a great mind. I am pretty good at having an idea about what’s going to work and what isn’t. I think I can say that at this point in my career. I know how to take something and own it. There are very few people, when they say … No, you need to do it THIS way … that I will kowtow too. Dutch though is one of those people,” said Rex.

It is no secret that Impact Wrestling has been through the ringer on the business side of things. Rex believes though that the company has finally turned the corner and is back on track.