Yo! We’re the Voros Twins and we would like to share our experience being a part of the 2017 Ring Of Honor Tryout / Seminar.

We mainly wrestle for ECCW in Vancouver, which is the largest wrestling company in Western Canada and have been wrestling for around three years. Our ultimate goal in wrestling is to make it a full-time career. Therefore being two out of the 40 wrestlers selected to do the Ring of Honor tryout was very exciting. Before we knew it we were on a plane flying all the way across North America to Philadelphia.

Once arriving at the famous ROH Dojo we instantly felt inspired. The walls are covered with posters of past ROH shows and feature some of all-time wrestling greats such as Daniel Bryan and Kevin Owens. We met the other Canadian who was there, Markus Burke, a tall, bearded veteran of the Maritimes. It was funny to show some American wrestlers how our Canadian money is made out of plastic. 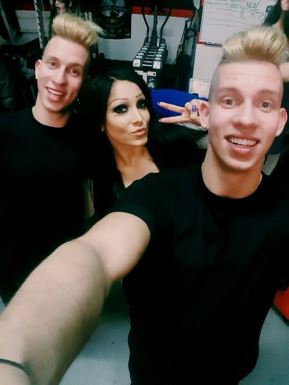 The Voros Twins and Mandy Leon at the Ring of Honor seminar.

Both ROH days started at 10 a.m. and ran until a bit after 10 p.m. with a 30-minute break for lunch. That makes for 24 hours of wrestling knowledge jam-packed in two days! After signing in, everyone was split up into two groups, one doing ring drills with Christopher Daniels (23 years of experience) and the other group went to the promo room with ring announcer and producer Kevin Kelly (25 years of experience).

We ended up being the first group to do promos and found ourselves crowding into a small room with nothing in it except a camera in the middle. Kevin Kelly sat behind the camera along with CheeseBurger, Caprice Coleman, Will Ferrera and B.J. Whitmer, who were there to give feedback and tips. Promos can be very nerve-wracking but Kevin Kelly and everyone emphasized that this was a place with no judgement and was meant to be a positive learning environment.

When it was our turn we talked about how we are the most identical, identical twins on the entire planet. We explained how we look the same, weigh the same and how we still share the same room and we’re 23 years old. Right away Kevin explained that we were very unique and had a lot of potential. Some of the feedback we received was to think of certain catchphrases or cues where we finish each other’s sentences. This advice is perfect because if we ever get lost or off topic we can have our own go-to things to say that sets us back on track.

Everyone did really well and it was interesting to hear the different stories and personalities. We learned everything from where and when to look at the camera to how vocalization and change of pace can greatly change the direction and tone of a promo.

One of the things we took away was showing fire. Ring Of Honor is known for its crisp, fast-paced, passionate wrestling and showing fire and fight is a big component. Head trainer Delirious (a 16 year pro) and Christopher Daniels did a drill where you had to exchange forearms with an opponent while putting emotion into every hit. With every forearm the hits should build in intensity and therefore the emotion. The drill ends when someone hits a big final strike knocking the opponent right off his feet. We’ve never been in a real fight but this felt really close to one. We were very thankful because Delirious showed us and everyone else that showing fire in a wrestling match can be powerful and captivating, and if used correctly can really take our matches to the next level. 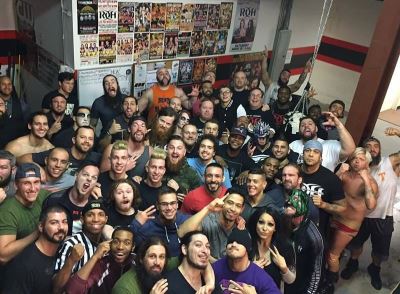 Also within the two days, we saw around 40 matches and each had very different stories, styles, characters and moves. Every match got tons of feedback from all the trainers. We were in two tag matches, and being the only brother/twin tag team in the tryout we instantly stood out and got a lot of feedback from another brother tag team — the eight-time ROH World Tag Champs Mark and Jay Briscoe. Our second match was a lot better than the first. Wrestling in front of the elite talent of ROH definitely causes a bit of nerves but in our second match we felt more relaxed. ROH trainers kept mentioning that in order to be among the elite in Ring of Honor you have to make yourself be undeniable.

Now that the tryout is over and we’ve reflected on the past few days, it reiterated the fact that we want to make wrestling full-time. The ROH door is open, and we are definitely on their radar. It is up to us to continue to gain experience, wrestle in as many places as we can work on our craft, and keep grinding! Until then, if you’re ever in Western Canada catch us wrestling on the local wrestling scene. Who knows, you may catch Vancouver’s Voros Twins on ROH TV some day!