The curtain. It is the one place wrestling fans rarely get to see behind. The inner working of any wrestling promotion is protected by the curtain which separates the audience from the production staff and the talent themselves.

WWE #1 by BOOM! Studios raises that curtain for fans, even if it is in a fictional way. 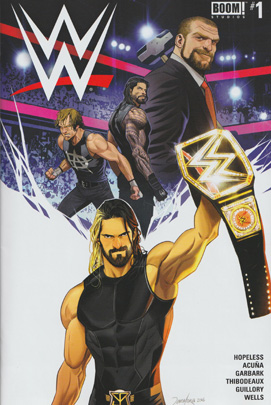 Unlike previous comic books which were either parodies or transformed wrestlers into super-powered heroes, BOOM! Studios and writer Dennis Hopeless (All-New X-Men, Cable and X-Force, The Answer!, Avengers Arena) have launched an intriguing take on the WWE by keeping all the characters as they are but filling in their missing history.

The first issue of the series focuses on Seth Rollins, his split from The Shield and what led to him cashing in the Money in the Bank briefcase at WrestleMania 31. The book opens with Rollins winning the most treasured briefcase in pro wrestling and being confronted backstage and accused of being an “Authority stooge” by The Usos, Roman Reigns, Dolph Ziggler and Kofi Kingston. Rollins is suddenly attacked from behind by Dean Ambrose as the others look on. Dean mocking or sneak-attacking a conceited Rollins from out of nowhere becomes the issue’s running gag.

We follow Rollins on his road to WrestleMania as his relationship with Triple H and a visiting veteran superstar plays out. As Rollins become more and more impatient, wanting to cash in the briefcase, Triple H exerts his authority reigning Rollins in while the veteran superstar offers his advice, pulling Rollins in an entirely different direction.

The situation comes to a head backstage at WrestleMania 31 and we learn why Rollins elected to cash the briefcase in and the ramifications of his decision to do so, well, at least according to writer Hopeless.

While some of the dialogue may be a bit silly — “Proof is in the pudding, Roman. That sweet, sweet golden pudding.” — the characterizations and happenings all work well to explain those historical gaps, answer some curious questions and tell a decent story. The only thing that might improve the storytelling is a bit of restraint, especially when it comes to the dialogue and a few clever in-jokes wouldn’t hurt either. The inclusion of a back-up feature focusing on the time-traveling hi-jinx of The New Day is a treat for fans. Of all the WWE comics that have ever made it to print, BOOM!’s take on the company and its talent is by far the most captivating, perhaps because Hopeless isn’t trying to reinvent the characters or the twists and turns of the WWE universe, but instead is just adding to and enhancing the personalities and the happenings that fans are already familiar with. With only one issue on the stands, it is hard to tell how well the new WWE comic book series will do but with its unique approach, WWE is off to a very promising start. 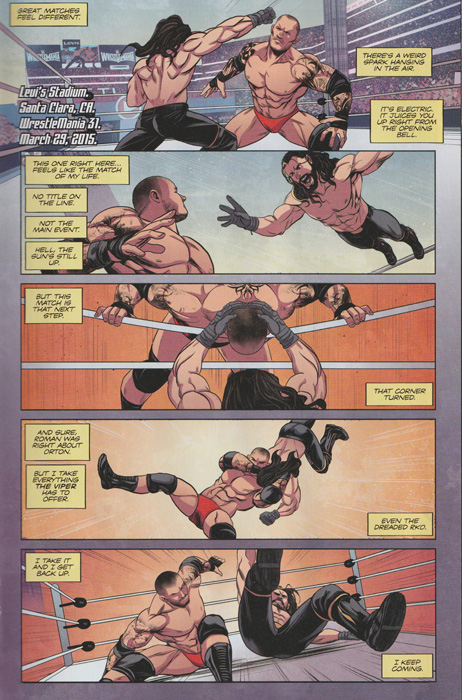