Tom Drake was greatest of all wrestlers turned politicians

There are wrestlers who toy with politics and don’t succeed; there are wrestlers who do achieve office for a time, like Jesse Ventura. Then there’s Tom Drake, who died on the morning of February 2, 2017 — as a wrestler and football star turned lawyer and politician, Drake was in a class all of his own.

Just his nine terms in the Alabama state legislature, including time as elected as Speaker of the House, put him in a rare territory for politicians, let alone one with a background in sports.

The “Cullman Comet,” as Drake was affectionately known, carved out a nice career portraying “a man of the people,” but it wasn’t a work. Inside the wrestling ring, there was never any question as to whether Drake was a babyface or a heel. His political life dictated that he be a fan favorite. And he did it quite well.

Drake was a star high school athlete in his home state and a collegiate standout at the University of Tennessee-Chattanooga where he was a three-time conference wrestling champion and a heralded football player. But his accolades and achievements didn’t stop there. 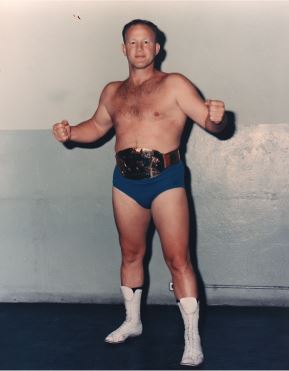 A product of the Great Depression, Drake was born Dec. 5, 1930, in Falkville, Ala., two years after a younger brother died being delivered by a midwife. His father, a tenant farmer, was killed on a railroad when Drake was only six years old. He had three younger siblings who he says “almost starved to death” during the dark days of the Depression.

Sports, however, proved to be a life-altering outlet for Drake. He took to wrestling as a junior in high school in the late ‘40s when he’d go to the local drugstore on Saturday afternoons and crowd around a small television with his friends, watching the athletic theatrics with amazement and awe. The teenager knew then that he had a bright future waiting for him in pro wrestling.

“I couldn’t whip everybody boxing or all that kind of stuff, and I didn’t necessarily have more strength than them. But I had one thing they didn’t have, and that was the God-given talent of balance,” Drake told Mike Mooneyham in The Pro Wrestling Hall of Fame: Heroes & Icons. “You can’t learn balance. You inherit it, and I knew I had it. I could always whip everyone in my class because I could outwrestle them.”

He played line in football at Cullman High School, but there was no wrestling team. At UT-Chattanooga on a football scholarship, he went to watch the wrestling squad and knew he could do it too, and asked the coaches for a chance. He did pretty good initially, until he had to face Dick Hutton.

Hutton, a three-time NCAA champion at Oklahoma State, disposed of Drake in 59 seconds. The quick loss earned Drake the dubious nickname “Fifty Nine Second Man” as a takeoff on a popular song from that time called “Sixty Minute Man.” The two later would become close friends, as Hutton turned to pro wrestling as well, including a run as NWA World champion.

As an amateur, Drake was a light heavyweight, and in his final three years, he went undefeated and won the conference championships three consecutive times without a defeat.

Drake did compete for a spot on the 1952 U.S. Olympic team, and while he didn’t make the final squad, he did make a life-long friend in fellow competitor Danny Hodge.

Back on the gridiron, Drake was the first player in the history of UT-Chattanooga to play in two college all-star games (Senior Bowl and Blue-Gray game). The Pittsburgh Steelers of the NFL picked him in the draft based on his performances in those games. made him a draft pick on the strength of stellar showings in the all-star games. UT-Chattanooga presented Drake with its Best All-Around Athlete award in 1952, for his skills in football, wrestling and track.

Drake, who earned his degree in 1954, would take a detour with a stint serving in the U.S. Army in the Korean War, but not before working his first pro wrestling match in Dyersburg, Tenn., for promoters Roy Welch and Nick Gulas. He would coach the Special Troops Command football team while in the Army and play as well with University of Tennessee All-American Andy Kozar.

An ad for another wrestling show caught Drake’s eye while stationed at Fort Benning, Ga., so he began wrestling on weekends, making far more money in the ring than he did in the army.

His plan was to go back to school to get his doctorate degree in education, but a chance meeting with a former Golden Gloves bantamweight champion named George Wallace changed all that. Wallace convinced Drake to take up law, and just as importantly, got Drake to help him in his campaign to become governor of Alabama. While Wallace didn’t win in 1958, he did in 1963, and was involved in Alabama politics for decades, with Drake as one of Wallace’s closest friends and key campaigners.

While getting his law degree at the University of Alabama, Drake served as a student coach for legendary football coach “Bear” Bryant. Drake had made a good enough impression playing for Bryant in the 1954 Senior Bowl that he asked him to coach the school’s first wrestling team as well.

During his last semester at the University of Alabama Law School, Drake successfully campaigned for a seat in the Alabama Legislature, representing Cullman County for 32 years.

As a pro wrestler — while still a politician — Drake was a master of the dropkick, and worked with the likes of Gorgeous George, Buddy Rogers and Fred Blassie during his 24 years in the mat game, retiring in 1978 after 24 years.

No less than Thesz once stated: “Tom Drake has brought more respectability to professional wrestling then any other man; his rise to Speaker of the House and his strong reputation of a no-nonsense politician and his open pride and admission it was pro wrestling that made it all possible.”

Tom and his wife Chris, who died in 2011, ran a law office in their hometown of Cullman, AL. They also served for many years as legal counsel for the Cauliflower Alley Club, a fraternal organization of primarily professional wrestlers.

As if that wasn’t enough, the Drakes had a farm for many years. They also loved to travel and competed in dance contests. 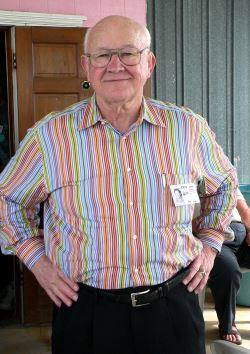 In 2008, Drake was the recipient of the Senator Hugh Farley Award, given to an individual who has distinguished himself both inside and outside of the ring, at the Professional Wrestling Hall of Fame and Museum in Amsterdam, N.Y. (The PWHF is now located in Wichita Falls, Texas.) In 2001, he was awarded the second-ever Frank Gotch Award at the George Tragos/Lou Thesz Professional Wrestling Hall of Fame in Newton, Iowa, where he was reunited with longtime friend and then-Minnesota Governor Jesse Ventura who, like Drake, went on from the wrestling ring to the political ring.

“Jesse and I did a lot of wrestling and tumbling in our younger days, and we’ve proved that we’re not through by taking our acts into politics,” Drake told The Decatur (Ala.) Daily. “A lot of people say wrestling is fake, but I would like to see them out there doing what we did. Fake or not, it was hard work and a lot of fun. We even made some money doing it.”

“Tom is one of the nicest guys that I’ve ever met,” said Ventura. “I know he is a popular person in Alabama, and I would not want to run against him if he does decide to enter the political arena again.”

Chris and Tom Drake had two sons, Tommy and Whit, who also entered the law profession; a daughter, Mary Frances, who is a pediatric doctor; and another daughter, Christy, a professor who taught Greek, Hebrew and Latin.

His passing at the age of 86 is major news in Alabama. The Alabama Democratic Party issued a statement: “Speaker Drake was a strong supporter of public education, a tireless worker for his district and North Alabama, and a caring friend for working men and women. He embraced Democratic principles throughout his life and he remained a loyal Democrat to the end,” said Nancy Worley, Chair of the Alabama Democratic Party, in the release.

There will be a funeral for Tom Drake on Sunday, February 5, at the First Baptist Church of Vinemont, in Cullman, Alabama. Visitation begins at 1 p.m. at the church. Burial will be at the church cemetery.