Winnipeg in the middle of February is not usually a destination for travelers, but this year, on February 18th, they’ll be coming out in droves for the first Legends Of Wrestling: Professional Wrestling & Sports Convention.

The man behind the effort is Danny Warren, who is better known in the wrestling community as “Hotshot” Danny Duggan; he’s also the promoter of the ever-expanding Canadian Wrestling’s Elite, which is based in Manitoba, but has run shows from Alberta through to northern Ontario. 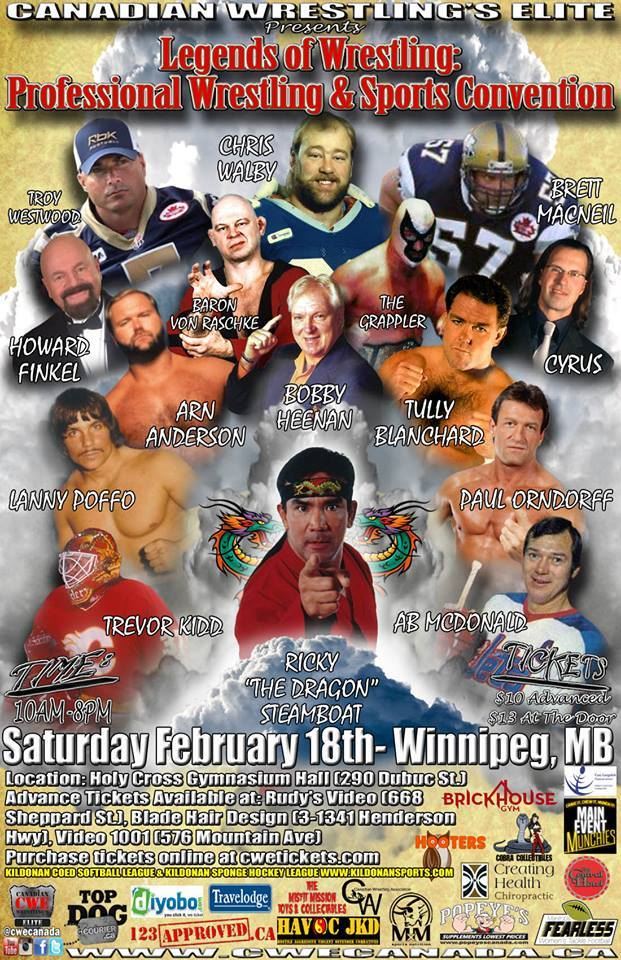 It’s the first major primarily-wrestling fan fest in Canada since WrestleReunion in Toronto in April 2012.

Warren sees it as a logical step for his promotion. “We are constantly expanding the CWE brand and with us growing in over a dozen markets across Canada we wanted to take a leap and offer fans something extremely special and different in this marketplace that has proven to be popular elsewhere,” he said. “Winnipeg specifically has always been a red hot wrestling town from the AWA to the WWF and now WWE. Winnipeggers love their wrestling and support their wrestling so we thought it was a great opportunity to present fans a lot of special talent that may not quite fit in CWE’s current touring model.”

For an outsider, the question is inevitable — why in February? “When you live in Winnipeg you live in the cold the majority of the year and as a result we see the most success with our events in the dead of winter,” Warren explained. “People don’t want to stay in cooped up at home, they want to get out and enjoy life and that is exactly what this event will offer the opportunity to do. February was also strategically picked as it is right on the road to WrestleMania when interest and eyes on professional wrestling are at an all-time high during the year.”

Between guests of Legends Of Wrestling and vendor guests, there’s a pretty good lineup of stars from the 1980s in particular. Ricky Steamboat, Arn Anderson, Tully Blanchard, Lanny Poffo, The Grappler Len Denton, Paul Orndorff, Bobby “The Brain” Heenan, Baron Von Raschke, and announcer Howard Finkel are all coming in, and local boy Don Callis, who was Cyrus in ECW and The Jackyl in WWF and recently took a gig as a commentator on English-language broadcasts of New Japan Pro Wrestling (replacing Steve Corino), will be there too. As well, other sports will be represented. From the hockey world comes goalie Trevor Kidd and the 80-year-old Ab McDonald, who played from the 1950s into the early days of the WHA Winnipeg Jets. From the CFL’s Winnipeg Blue Bombers comes Troy Westwood, Chris Walby and Brett MacNeil.

The wrestling names were announced first followed by other sports names. Warren said that was intentional. “Being so connected in the community and immersed with so many different networks here it was highly suggested by those in the sports collectibles industry it would be wise to have some sports flavor to entice the sports vendors and collectors that may not be completely interested in wrestling,” he said. “It is also a double bonus in the sense that all of our sports star have strong roots in Winnipeg which instantly gave us more credibility with the local media and local sports fans.”

The buzz is picking up for the event, which will be at the Holy Cross Gymnasium Hall (290 Dubuc St.), running from 10 a.m. to 8 p.m. Tickets to get in are $10 in advance and $13 at the door, with a variety of costs for photos and autographs from the stars. Tickets are available through the cwetickets.com website.

It’s pretty easy to tell that Warren is pumped for Legends Of Wrestling. “I assumed this event was going to be big but it is turning into something bigger than I first imagined. People have confirmed they are traveling in from multiple provinces and states and the local and wrestling media has been beyond gracious and excited to give coverage about the event,” he said. “My expectations are a full house February 18th, a lot of extremely happy fans who get to meet their childhood heroes and me eagerly getting back to work the very next day planning Legends Of Wrestling 2!”