Joseph Michael Carson (31), was found dead with another man in a car in a Wal-Mart parking lot near Owosso, MI, last Friday evening, January 27, 2017. Two Grand Rapids brothers have been arrested for killing the Flint men. 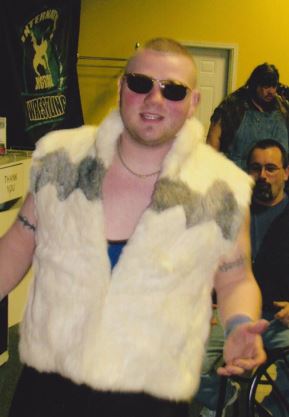 Joe Carson heads to the ring. Photo by Leonard Brand

WLNS 6 News reported the victims travelled to the parking lot to sell marijuana, a transaction stemming from a posting on Craigslist, but were fatally shot and robbed instead.

A “GoFundMe” memorial fund claims the meeting had been intended to be a medical marijuana transfer from one patient to another.

Carson was trained to wrestle by Truth Martini, who most recently was a manager in Ring of Honor. But his mentor and father-figure in the business was Rude Boy Rudy Hill, a veteran of the hardcore wrestling wars who only just retired last year.

An emotional Hill spoke on the phone about Carson’s death.

“He was more than a friend. He was like a son to me. It was pretty devastating,” said Hill. “When I got the news of this, it broke me into a million pieces.”

Hill met Carson not long after the youngster started wrestling, around 2006 in the Detroit-area promotion XICW. “I’ll never forget our first conversation. He came up and was like, ‘Man, I’m such a big fan Rude Boy,'” recalled Hill. “Then he started telling me, ‘Man, I loved when you wrestled Abdullah the Butcher and I loved when you wrestled Terry Funk,’ and he started telling me some of the other things that I’ve done.”

The two struck up a friendship and when Hill teamed with Chuck Wagon to start running their own wrestling promotion, Carson was brought in. “He was one of the first people that I reached out to,” said Hill. “He came along for the ride. I’ll tell you, he was one of those kids, and I’m not just saying this because he’s gone … he was a kid that had a lot of respect for the business, had a lot of respect for kayfabe, and who really respected the history of wrestling, the guys that paved the way. He was one of those guys that wouldn’t allow the veterans to even carry their own bags into the buildings. He was very respectable.”

The respect extended to others, said photographer Leonard Brand. “JJ was always polite to me and was always willing to do photos,” said Brand. “He was soft spoken most of the time but was taught respect for the business and always was eager to learn something new. The last few years he didn’t wrestle much and his passion was MMA fights.”

Carson was welcomed into the Hill household like another son. One time, Hill was surprised to run into Carson at a boxing event where his actual son, Carlito was competing. “He was an accomplished boxer,” said Hill. “He had a passion to just be involved in combat sports. He started doing the MMA thing.”

Not being a fan of MMA, and imagining the difficulty of seeing someone he cared about getting beaten up, Hill never saw Carson compete in the cage after he turned pro in 2014. Competing as a middleweight, Carson fought as “The Irish Bad Boy,” and produced an 0-3 professional record. “I knew he could hold his own, I knew what he could do physically as a man,” explained Hill, launching into another story where the wrestlers were in a bar in Bay City, Mich., after a show. A guy at the bar was giving Carson the gears.

“The guy was being belligerent and yelling in his face,” recalled Hill. Carson told the aggressive patron to sit down. “The guy, he was much bigger too, and I watched him drop this guy with a right hook so quick. And he stood over the guy and [Joe] said, ‘Now, I asked you to sit down.'”

Around Detroit, he was “Always Business” J.J. Carson, coming to the ring with BTO’s “Takin’ Care of Business.” He also used J.J. Castillo on occasion. In International Big Time Wrestling, Carson was one of the most hated heels. “He knew how to draw heat, man. That was one of the cool things about JJ,” said Hill, explaining that Carson just didn’t have “it” to make it out of the Michigan indy scene. “He was really heartbroken that he couldn’t go as far as he wanted to in wrestling. He was a great talent. He was a good worker, he wasn’t great. He was good. He was good. But he had so many other passions.”

Hill said that Carson could work any style, and was more than willing to don a mask — usually as the Masked Russian — to help fill out the card. “One of the things about JJ is he could work a match any way that I needed to work, or another guy needed to work,” said Hill. “When he worked with me, he would do the hardcore style. But he was trained to do it all. I mean, when we had him against Shark Boy, those guys went a half hour of just solid, bump, bump, highspots. He could do it all.” 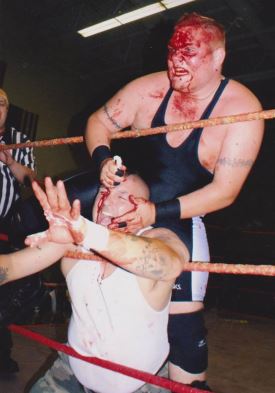 JJ Carson gets the better of Rude Boy. Photo by Leonard Brand

All told, Hill figures that Rude Boy and JJ Carson competed 17 times in the ring, from 2007 until two years ago. “Our last match was in 2015 in Saginaw. He had been away from wrestling for a while and he showed up. It was great too, because my opponent didn’t show up,” recalled Hill. “So he was like, ‘Hey man, do you need somebody?’ I said, ‘Absolutely.’ So we went out there and the match was the holy hell shits, it was terrible. It was terrible, he was rusty, so some of his potatoes were a little bit too hard, him being out of that MMA cage.”

Hill, a veteran of the wildly violent shows produced by the Insane Clown Posse, isn’t blind to issues that many face in pro wrestling. Carson was no different. “He was also a kid that had demons too,” said Hill, though he never saw Carson take any drugs. “He was a guy when he partied he partied hard.”

With the funeral on Thursday, Hill is dreading saying goodbye to a friend, especially one who died under such a violent, unexpected fashion on Friday, January 27. “In the circumstances of his death, little things are coming out here and there, pieces of it,” said Hill. “I don’t find it to be not true that he had this medical marijuana card and he was trying to raise money. He had two young children. He was a guy who had been in between jobs off and on forever. He never could just keep that 9-to-5 job, it wasn’t in his heart. He wanted to leave his mark in combat sports of some kind.”

Carson leaves behind a wife and two young daughters. Hill is already planning a fundraising wrestling event in early April with all proceeds going to Carson’s children. It’s the least he can do. Choking back the emotion, Hill recalled Carson calling him after Joe’s father died in January 2016, and tell Hill that he was actually blessed to have two fathers — his own and Rude Boy.