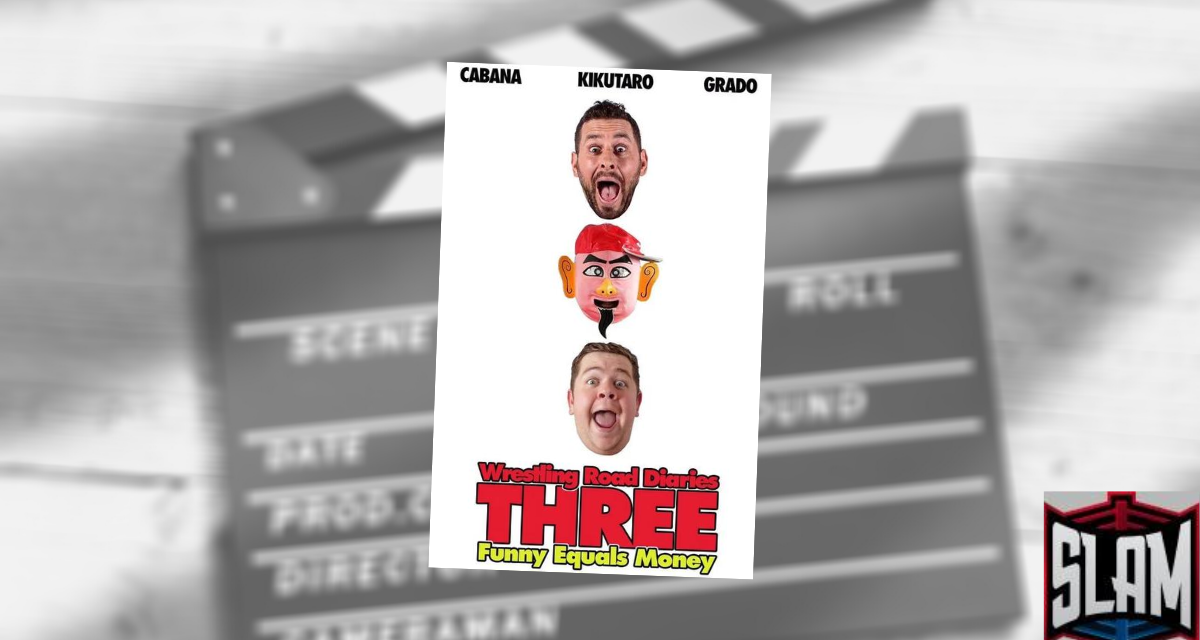 With The Wrestling Road Diaries 3: Funny Equals Money, Colt Cabana serves up another slice of life on the independent road — with a side of silly.

The promotion for Cabana’s third documentary peeking into the lives of indie wrestlers tells us that “professional wrestling has always been known for it’s (sic) tough, mean, hard hitting wrestlers.” Well, yes, that’s certainly true, but pro wrestling has also long straddled lines between comedy and drama, offering blood feuds and slapstick battles on the very same card. In that light, Funny Equals Money, is less about shedding light on the existence of comedic wrestling, and more in line with the previous installments in the series in that it’s the personal story of three particular comedic performers and how they have carved their own path in the world of, yes, tough, mean, hard hitting wrestlers. 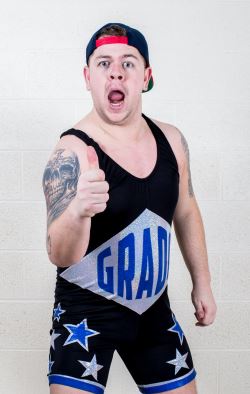 Cabana has two new compatriots for this film: Scotland’s Grado and Japan’s Kikutaro, and each gets their time to explain what inspires them to play for laughs in the ring, and in-ring footage from their tour shows allow us to see it unfold. Director Jack Edinger (who also helmed the series’ second film) utilizes non-chronological storytelling on a few occasions to strong effect, as we watch parts of a match, then listen to a post-match review of a favourite part that we didn’t get to see, go back in time to before the match where the gag is planned out (one great moment sees Kikutaro and Cabana inspired by a lost balloon stuck up on the ceiling), and then finally go back into the match to see the spot itself. It’s a good piece of filmmaking that allows the audience a little mystery to unpack through viewing, and not simply be led by the hand through the narrative.

Through snippets of the wrestlers travelling, lodging, and seeking comfort food together, we see an easy camaraderie and a shared sense of humour; these connections are to be expected from a group that makes their living in such a niche market. Cabana eloquently describes wrestling as a welcome escape from reality, and comedy wrestling, therefore, as “the escape from the escape from reality.”

More than those communal sensibilities, though, these three share a pragmatic understanding of what has brought them to this path. Grado admits that he never imaged that when he became a wrestler that he would be “the funny guy,” betraying an acceptance of categorization that will distinguish him from what must be then termed a typical wrestler. Yet, later in the film, he explains that upon first watching Big E Langston in the WWE he dismissed him as “just another body guy,” and that it wasn’t until Langston started shaking his backside that he became a fan of his. It seems Grado can both lament and love his station. 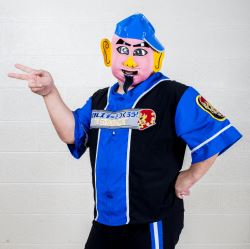 Kikutaro, who by necessity due to the language barrier has less mic time than the other two, declares quite clearly that he knows he’s not in a position to make a run as IWGP or Triple Crown champion, but that “I understand my position in the show,” and that is to “find the fun.” Cabana, finally, likes to differentiate between what he does and what a serious-minded wrestler does in the same way that actors choose roles that best suit their style. “We’re wrestlers, but we’re also comedians,” he explains. “Not all actors work in the same genre. What’s super hard about it is you have a different partner every night.”

As the three make their way through classic indie wrestling venues, though, standing on the top rope and bracing themselves against the drop-panel ceiling, Grado acknowledges the obvious. “It’d be brilliant to go to the WWE and wrestle at WrestleMania,” he admits. “I suppose that sounds like a dream, but I’m getting to wrestle Tracy Smothers tonight. That’s just as cool.”

The bit with Smothers, in Brooklyn, Ohio, is interesting, as it really shows some fundamental differences between getting over as a heel and getting over as a comedian. Grado is working his character, a bumbling grappler who thinks he’s capable of more than he is, while Smothers ends up laying a profane tirade on a young girl at ringside who, to be fair, was heckling. Still, Smothers didn’t come off as playful but as brutally heelish. Cabana refers to the unwritten rule, though: “(Smothers) is the veteran, so you go with him.”

The connection to the crowd is something brought up many times throughout the film, as these performers recognize that without a crowd, there’s no show. All of them relate stories of people who have told them how much their comedic efforts have lifted their spirits, got them into (or back into) wrestling in general, and to these three wrestlers it’s what drives them.

It’s why, after one match in St. Louis, Missouri, Cabana chastises himself for getting roped in by a couple of hecklers who, as he figures, were trying to make the match about themselves. “It’s frustrating,” he says. “We ask them to react, and we get mad at them when they react too much.” What was really bugging him, though, was that he was mad at himself for swearing so much when there were many kids in the crowd. “I know how important it is to bring kids to these family friendly shows; it eats me up.” It’s a very honest moment of someone who thinks he’s failed while most everyone around him is cheering.

Speaking of the kids, viewers have to know going in that this isn’t a family-friendly film. Grado is hilariously vulgar throughout, while short segments on comedic wrestlers Joey Ryan and Dick Justice venture into other seedy territory.

For everyone else, though, it’s filled with little funny moments (slow motion wrestling, Cabana wrestling with a free pizza on the line, Kikutaro fixing a neighbour’s leaky plumbing, and Grado trying out Cabana’s Cut My Promo segment), and topped with some genuinely poignant insights.

Cabana sums up his in-ring philosophy by grounding his act in a purpose. “I call it justified comedy,” he explains. “It has to make sense within the context of the match. I’m doing (the comedy) so I can throw him off his game and I can get the win.”

There are probably many fans who couldn’t care less about the justification behind the gags, but through Cabana, Grado, and Kikutaro, find that escape from the escape, and that’s reason enough to cheer on the act.

For them, or for anyone who wants to see familiar in-ring storytelling told with more than a wink, these three stooges of wrestling have got you covered. It’s a very good slice-of-life documentary, and a perfect addition to the pantheon of “behind the curtain” films on the business.