Sky’s no limit for ACH

Flying through the air and psyching up the crowd are the hallmarks of ACH. This unpredictable grappler has been exposed to a bevy of ring styles over the last few years in Ring of Honor, Mexico, Pro Wrestling Noah and New Japan Wrestling. Perhaps the biggest influence on his career has been his family.

ACH born Albert C. Hardie Jr. in 1987 to community minded parents who believed in chasing dreams. When you are given the name of your father it could be seen as a blessing or a curse. ACH loves carrying on the name of a man who has touched so many lives. His father, a San Antonio DJ, has spent decades helping the kids of his community by coaching youth baseball. “It is cool to carry the torch and to pass on the legacy by giving me the name, so I get to carry it with a lot of honour,” said ACH. The always bouncing ACH is the kind of guy who is full of energy and he attributes that to his father as well. 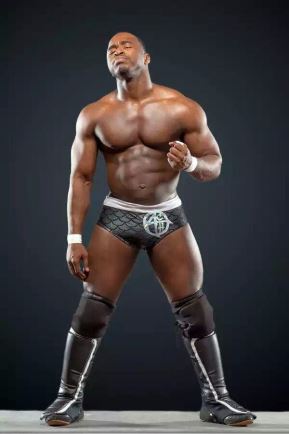 When he was young his parents divorced and he spent time between the two households. His mother worked a nine-to-five job raised not only him, but his two sisters who were roughly a decade older than him. In a house with three women ACH found it difficult to get a word in edgewise. His family made him the centre of attention and ACH loved them for it. He would describe his childhood as sheltered and didn’t leave the house very often. That is where he developed his imagination reading comic books and watching cartoons.

At 10 years old ACH was invited to a friend’s house and that is when he first saw wrestling. The wrestlers of WCW were on the TV, featuring the newly formed New World Order and most importantly the luchadors. When the larger than life characters flashed across the screen ACH was fascinated.

“So, I saw the Rey Mysterios, the luchadors, high flyers and how those guys would do all the acrobatic stuff, the combat of it, and it just called to me, just the entertainment value of it,” recalled ACH. “My whole life I have always been the centre of attention and so wrestling spoke to me in so many ways.”

Unlike other pursuits that his parents encouraged him towards, wrestling was the first time he wanted something for himself. ACH sought out the wrestling. “It was one of those things that I dived in on my own,” said ACH. “Football wasn’t like that. You watched it with your father, but when I tried it there wasn’t the same passion there. I was disconnected with it.”

After high school ACH decided to follow his dream of becoming a wrestler. His parents were supportive and understandably concerned that their child was entering a profession that was very physically demanding, but one in which very few people ever made it past a handful of matches at the local armory.

“I went straight from high school to wrestling,” said an animated ACH. “I graduated, took four or five days off, went back to my job at McDonald’s and then went to my first wrestling practice. The next day at work I was standing at the register so stiff I could barely move. Everything hurt, it was the worst best pain ever.”

ACH realized that he was not a big man, but the luchadors he saw on the TV as a kid showed him that size was not necessarily a barrier in wrestling. He dove into his training with passion in his heart, full of the belief that if he committed his whole self to the sport good things would happen. “My father always told that if you are going to do something, give it your all and just don’t quit. That is how I have looked at wrestling,” said ACH.

Training under Jerry Reyes taught ACH not only the rudimentary skills a rookie wrestler needs but so much more. “[Jerry’s teaching was] very important, more so mentally then the actual skill level because it gives you a better love for it,” said ACH. “Through it all I have sacrificed so much and it gave me so much more of a deep appreciation for it. Without those sessions of training like that I don’t know where I would be.”

In 2012 ACH started working for Ring of Honor, and only left the promotion at the end of October 2016. He has been honoured to have been a part of a great franchise for the past four years. ROH gave ACH the platform to grow as a wrestler and do it as a full-time profession.

“The fact that they have given me so much the past three and a half years that I’ve been here means the world to me,” said ACH with sincerity, a month before his departure from the company. 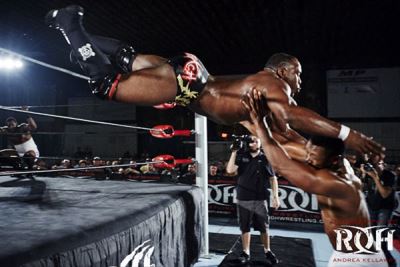 ACH dives from the ring during ROH action in Lockport, NY, in September 2016. Photo by Andrea Kellaway

In 2012 ACH attended a WWE tryout camp that really opened his eyes to the calibre of wrestler that he was and what he could still become. “One thing that reminded me of something, it burned another flame inside of me,” said ACH. “When I was there amongst all those guys, like Kevin Owens who was Kevin Steen in ROH, Roderick Strong was there, I was with a high class of guys. They were looking at me like I was on Kevin Steen’s level and that blew my mind. So, when I left I took of the knowledge they gave me, but I also took all of the confidence they gave me. That was the first time in my life that I realized I could be a WWE guy. So, with that on my mind it gave me something to work towards. So, I keep on grinding all of the time. I love it.”

With his current free agent status, many expect ACH to end up in the WWE’s cruiserweight division, following the success of Cedric Alexander who left ROH for WWE.

One of the highlights of ACH’s career was locking up with one of WCW’s former cruiserweights and former WWE champion Rey Mysterio. AAA wrestling in Mexico contacted ACH and placed him on a trios team with Brian Cage and Moose. His team was placed in a tournament and when they qualified for the semi-finals ACH’s mind exploded. There he was in all his high flying splendour. The man who made him a wrestling fan stood across the ring from him, Rey Mysterio and his partners Alberto Del Rio and Mystico.

“We were getting booed, but the thing that was so cool was that they would applaud us and give us appreciation for giving our bodies to them,” remembered ACH fondly. “That is what made it even better. Of course they wanted the dream team to win, but they gave us the appreciation for our hard work too. I remember sitting in the locker room after the match just like who would have thought that I would stand in the ring with Rey Mysterio, Alberto Del Rio and Mystico in Mexico. I didn’t think anything like that would ever happen to me.”

Wherever ACH ends up in his career, whether that be with ROH, WWE, AAA, in Japan it is evident that he will face each new chapter with enthusiasm. He has the support of his family and that is all he needs.