Wrestlers, like actors, portray two faces. There is the face or character who is in the ring and then there is the real person who lives outside of the squared circle. Here are the stories of Justin Ellis and Justin Sane.

A lifelong wrestling fan, Justin Ellis remembers watching Bret Hart waving the Canadian flag on his television set in Edmonton, Alberta. As a six-year-old, Ellis was transfixed by The Hitman’s bright pink outfit and exuberant personality. He knew he had stumbled onto something cool. 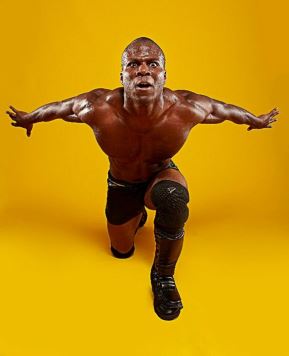 As the years went by, the normally laid-back Ellis became obsessed with wrestling even when his family moved to Burlington, Ontario. His only stumbling block was his mother. She outlawed wrestling in her home. She couldn’t stand the brutes on the screen but, little by little young Justin wore his mother down, until, at age 10, he was watching his fill of the sport.

When Ellis was 15 he enrolled in a week-long wrestling camp for teens. Living Legends Wrestling Academy in Hamilton introduced the youngster to the basic of the mat game. At the end of the five days he enrolled in the weekly classes at the school. While his mother didn’t approve she knew she had to let him follow his dream of being in the ring.

Ernie “The Executioner” Moore, a professional wrestler for decades with experience in many different territories, taught Ellis the nuances of wrestling. A lot of local wrestlers made their way to Living Legends to work on their craft between bookings and worked with Moore’s young pupil. Ontario wrestling scene stalwarts such as Kwan Chang and Notoriuos TID made an impression on the eager student.

Within a few months Ellis was granted the chance to show his skills on a local show. He had one big problem. He did not have a wrestling persona picked out. Soon his family had a brainstorming session and the unlikeliest of people came up with the name Ellis would work under for the next 11 years. His mother, being partial to her sons’ real name, wanted to keep the first name Justin. Then it hit her! Sane! The second name would play off the first. Then and there Justin Sane was christened.

Sane made his debut in his hometown of Burlington in the parking lot of a Tim Horton’s restaurant for NSW. “I definitely wasn’t perfect. That was a hundred pounds ago,” said the 225-pound wrestler.

At the time Sane was trying to emulate the moves of high flyers such as Rey Mysterio and Jeff Hardy. It wasn’t until he suffered an injury that put him on the sidelines for many months that he thought about the wrestling style that might suit him best. Over the first few years of his career Sane started hitting the weight room and learned how to workout effectively. He even became a certified personal trainer. With more muscle and maturity packed on to his frame Sane realized that he needed to be a powerful and explosive wrestler.

“As I put on more muscle mass and got heavier the high-flying moves didn’t look as pretty or crisp,” said Sane. “It didn’t make sense for a 225-pound guy to do those moves so I changed to more of a powerhouse base set. There is still some athleticism in there and the fans appreciate the power and a little bit of athleticism so I just stuck with it.”

Like most wrestlers, Sane had the goal of being in the WWE one day. A funny thing happened on the way to that goal, his personal training business became very successful.

“My personal training business actually grew quite large,” said the 27-year-old. “It is doing very, very, very well, so for me it is hard to risk everything and drop everything and just go for it. I’m always battling myself with that, what if it doesn’t work out? Then I have to start the business all over again. If I did make it that would be cool, but by 35 I would be pretty banged up. For now I love doing it on the weekends and we will see what happens.”

The weekends are Sane’s time to enjoy himself. Perhaps not like most folks do by going to parties or the movies, but for Sane it is in the ring.

“For me, work during the work is just go, go, go, work, work, work and then the gym,” said Sane. “On the weekends I can just let loose and fly around, jump around, just kick people, do what I don’t do on a week day. I just fly and burn off that energy. I don’t know what I would do on the weekends if I didn’t do wrestling.” 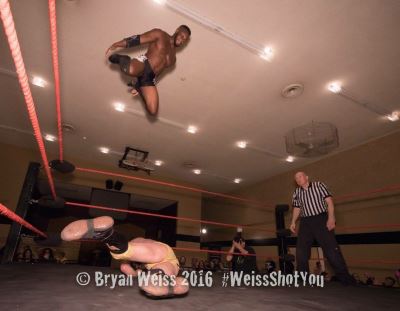 Justin Sane goes high in the air for his splash finisher. Photo by Bryan Weiss

Crossfire Wrestling promoter Chris LaPlante loves having Sane work for his company. “Justin is a remarkable talent,” said LaPlante. “Backstage he is very humble and quiet but when he gets in the squared circle he literally is Justin Sane. Brings everything into the ring and has one of the highest splash finishers I have ever seen. He is always willing to learn. He has a bright future ahead of him. He is 27 and already been in the business 11 years. In my opinion he will be a major player in the business for years to come. I am proud that he is part of Crossfire Wrestling.”

Wrestling veteran Cody Deaner likes what he sees in Sane. “He is a super athletic guy,” said Deaner. “We are in an era where guys are doing unbelievably athletic things. He has a really good look. If he can learn the psychology of wrestling and really study the art form of it he will have a really bright future.”

One area where Sane has taken a keen interest in improving is his selling of his opponent’s moves and the damage that has been inflicted on his body. “Selling is huge!” exclaimed Sane “I do make an effort to sell because that gets over. Sometimes it feels like it is too long, but it gets over. For example when my opponent was working my arm and then I was giving him elbow drops. Every time I gave him an elbow drop I would shake off and hold the elbow. It is the small things right?”

Justin Sane has the right attitude and work ethic and Justin Ellis has molded his alter ego after a strong silent type of character who always does what is right.

“Justin Sane is a loose cannon who is there to win and be a good sport,” said Ellis. “If you are on his bad side he is going to break you. He will never disappoint the fans. I think the fans love the effort. I just want to put a smile on everyone’s face. I hope they remember me and have a great time.”

Whether he is Justin Sane or Justin Ellis there is nothing insane about this man. He is a hard worker who loves his life inside and outside of the ring.