Film Review: ‘Rocky III’ is the champ of boxing/action movies 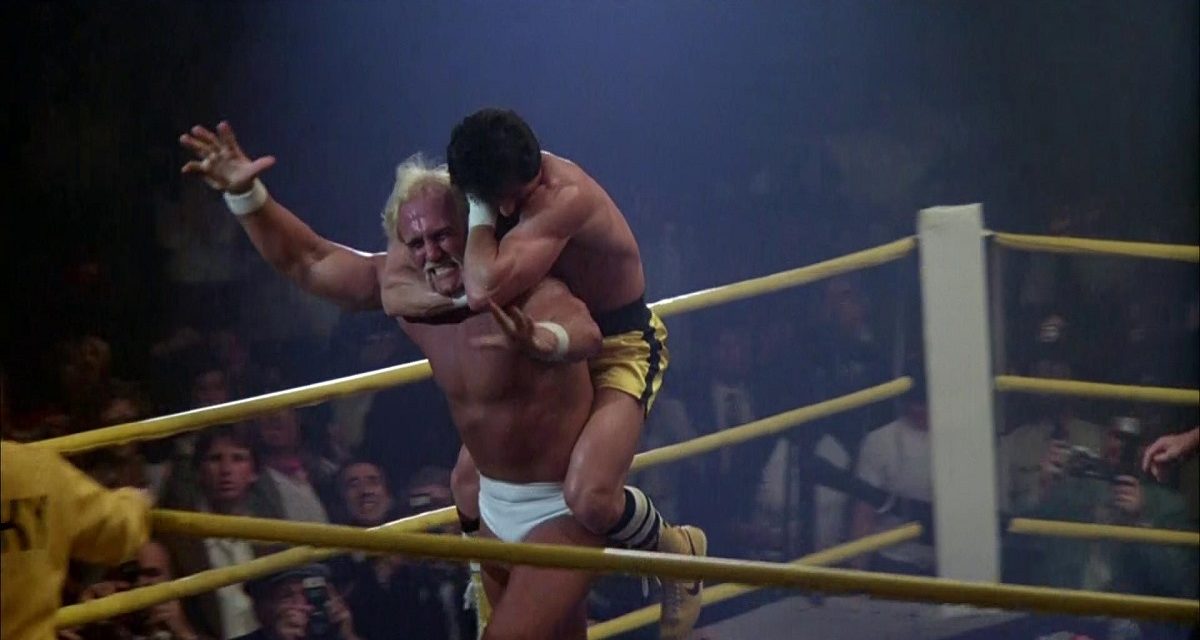 Film franchises are, frankly, expected to lose quality as they progress in quantity, and these expectations are no doubt based in part on the Rocky series. The middle child of the original run, Rocky III, is an immensely important component of Slam Wrestling’s Hollywood Headlock, but before I get to those details it’s important to understand the Rocky movies as a whole.

For those uninitiated in the Rocky movies, especially those who are too young to remember the buzz around them as they were released, it is inherently difficult to judge the quality of the earlier films as hindsight paints them in the same negative light as the later, less successful installments. Thanks to jokes tossed off in movies like Airplane 2: The Sequel and Spaceballs, which contain references to “Rocky XXXVIII” and “Rocky 5000” respectively, Sylvester Stallone’s boxing films became synonymous with a wrestler who simply wouldn’t hang up the boots when the time had clearly come (although the sixth film, Rocky Balboa, has won back some respect for the franchise). In the beginning, though, Rocky was no joke, and neither was Stallone.

The first movie is an often-overlooked Oscar-winning Best Picture — a low-budget, character-driven story starring an unknown (whose previous work included Death Race 2000 — which you should treat yourself to a viewing of sometime). In other words, Rocky was a risk. It paid off huge for John G. Avildson, at the time an independent producer who had difficulty adjusting to the studio system, and most notably it launched Stallone into the stratosphere; he was a rocketing star with an opportunity to ask for the moon. He used his clout to take on the directing roles for the next two Rocky films, having already written the screenplay for all of them (the first being written reportedly in 10 days). By taking these responsibilities on, Stallone was putting himself in a position with more to lose than to gain. Making a good sequel is a challenge routinely unmet by many of Hollywood’s best.

Rocky II, however, was a good sequel. Understand that to categorize it as simply “good” is not to disregard it: Stallone had accomplished a significant achievement. An even harder task, of course, was to make a third good film. Rocky III does what all story franchises must do eventually: it re-invents itself. Gone is the gritty texture of the first film; gone is the reluctant journey of the second film in which Rocky doesn’t seek the rematch with Apollo Creed (Carl Weathers, Predator, Happy Gilmore) but answers the call nonetheless. In the third film, our hero is a passionless, put-up champion who is stringing together a series of easy victories over hand-picked opponents, chosen by his manager Mickey (Burgess Meredith, G.I. Joe the Movie) as a means to keep Rocky away from the charging Clubber Lang (Mr. T).

Here’s where we get back to the importance of Rocky III to the wrestling world. For better or for worse, it was the vehicle that originally turned Hulk Hogan into Hollywood Hogan (I mean that figuratively, naturally, as this was eons before Hogan adopted that name and the black & white colour scheme) while simultaneously paving the way for Mr. T to enter the WWF and help headline the inaugural Wrestlemania. But enough with the jibba-jabba, as Mr. T might say, and let’s deal with the mohawked man himself first. 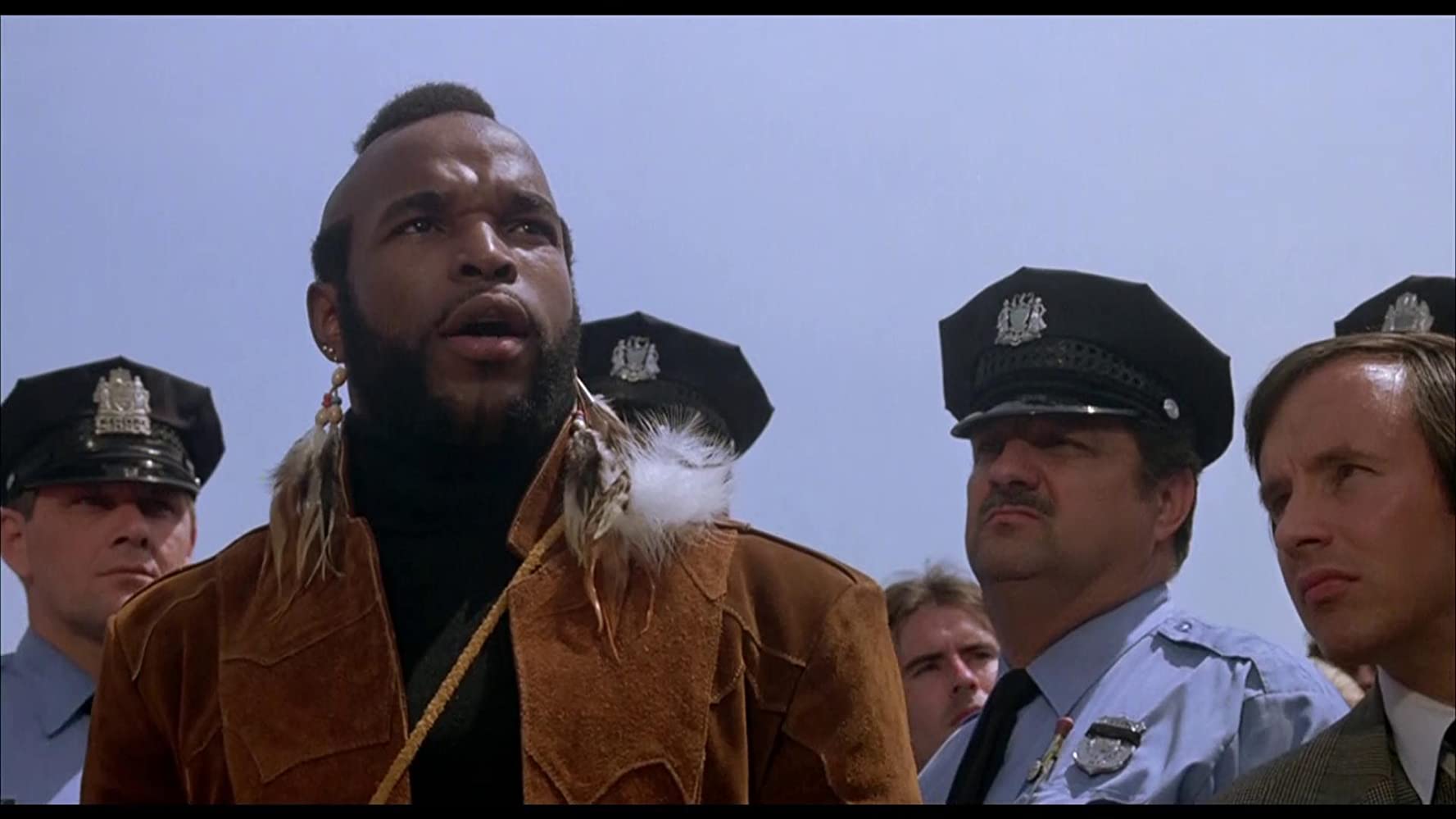 Mr. T. as Clubber Lang in a scene where he seeks Rocky’s attention. Photo: IMDB

Depending on one’s perspective (read that as “age”), Clubber Lang was either a prophetic version of Mike Tyson or a tribute to George Foreman (whose image also suffers the same problem of hindsight as the Rocky series: the grinning, grilling Foreman of the 1990s belies the ferocious monster that he was in his heyday). Lang is everything that Rocky isn’t: hungry, committed, and ignored. Rocky’s character was always suffering from lack of commitment to his fighting, his pride, and his girlfriend, while Lang is single-minded in his destruction of boxers on his way to the number one contender’s spot. Finally he confronts Rocky and goads him into accepting a match. Not only is Rocky decimated by Lang, but Mickey suffers a heart attack during the match. Emotionally and physically drained, Rocky is saved by his former adversary Creed who trains him on the way to a re-match with Lang. 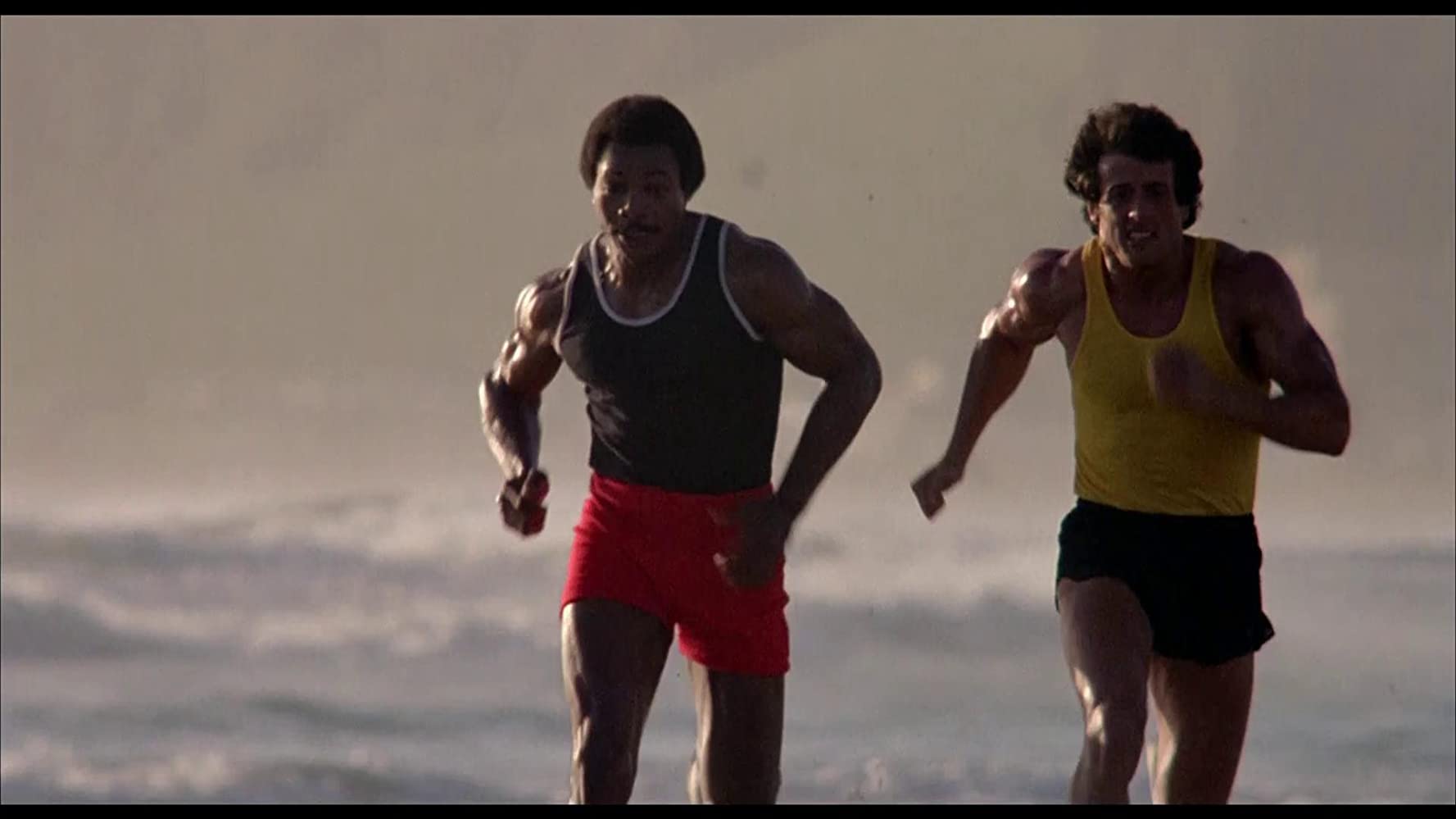 It’s hard to judge Mr. T’s legitimate in-ring skill with the fast-cutting that Stallone utilizes in the fight scenes, but the former “bodyguard to the stars” looked good enough to lend credence to the boxing background used for his character in the WWF. Mr. T had a strong grounding in sports such as football, some martial arts and even some wrestling as a youth. His tenure in the federation culminated with his match against Roddy Piper at WrestleMania 2, a match which Piper has claimed had some shoot-like qualities since he didn’t appreciate Mr. T getting into the ring through the acting business. Still, after having seen numerous other celebrities try their hand at wrestling, it’s safe to say that Mr. T is among the most worthy to have stepped into the ring. Besides, Mr. T could talk like he belonged in wrestling.

The role of Clubber Lang was originally envisioned by Stallone as quiet, perhaps even to the point of staying silent throughout the entire film, all to increase the mysteriousness and fear factor. It may have played well enough with another actor in the role, but Stallone must have realized what everybody else now knows: half of the show with Mr. T is in his dialogue. Besides, had he been a mute monster, Lang never would have been able to utter that while he didn’t hate Rocky, “I pity the fool.” Yes, that’s where that came from. 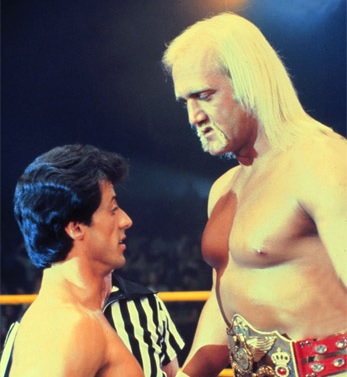 The Tale of the Tape does not favour Rocky. Photo: IMDB

Hogan’s role, on the other hand, was less significant in terms of the whole story arc in Rocky III, but as might have been expected with Hulk in the role of Thunderlips, the impact of the part was greater than the screen time would suggest. Thematically, the clashing of Rocky and Thunderlips, world champions in boxing and wrestling respectively, at a charity fundraiser epitomized the break from the street-level, realistic storytelling of the first two films.

The scene was all about spectacle, grandeur, and ultimately was just a lot of fun. Hogan’s presence had a huge impact as the towering “molten mountain of lust,” making Stallone look positively puny (especially in a memorable over-the-shoulder shot looking down at Rocky from behind Thunderlips’ shoulders). The match itself is full of, wait for it, high-impact moves by Hogan — capped off by a gorgeous slow motion shot of a colossus of a leg-drop by Thunderlips. Based on that shot alone, you would accept that maneuver as finishing off challenger after challenger to Hogan’s WWF title.

Hogan has told the story of receiving a note from Stallone asking if he would take on the role; a note that Hogan off-handedly ignored and presumed to be a joke. The real joke would be picturing anyone other than the emerging star in the performance. Hogan may have been directed to mainly growl and look menacing, but Stallone did allow for Hulk to show a lighter side by engaging in pleasant conversation with Rocky and his family once the match was over. Hogan was exactly what Rocky III needed, and the role was exactly what Hulk needed too. More than that, though, the synergy created between Hollywood and its mainstream culture with the still shadowy entity of pro wrestling was exactly what Vince McMahon would late tap into to usher in the Rock n’ Wrestling phenomenon.

Rocky III actually launched the very first “Road to WrestleMania” that would culminate with Hogan and Mr. T as partners, including a stop on Saturday Night Live where the two brought wrestling to a new high point of mainstream consciousness (I still remember how Billy Crystal, as Fernando, had Hogan and Mr. T giggling and making a point of how Hogan’s pecs shook when he laughed). For Mr. T, the newfound fame led him to his most famous role as B.A. Baracus on The A-Team (on which Hogan made guest appearances, and also co-starred Dirk Benedict of Body Slam).

Fast forward to the future where Stallone reportedly brought in Terry Funk (with whom he had worked on Paradise Alley) to choreograph the climactic street-fight in Rocky V, while Stallone was chosen to induct Hogan into the WWE Hall of Fame, and it’s easy to see that Rocky III is one of the cornerstones of the Slam Wrestling’s Hollywood Headlock and was an enormously influential film in the development of wrestling’s modern era.