Kenny Omega’s stardom in Japan about far more than luck

Kenny Omega uses the word “luck” often to describe his career, which hits new heights on Sunday with the first ever ladder match in New Japan Pro Wrestling, against fellow Canadian Michael Elgin.

But Omega’s career, from small shows in Winnipeg to stardom in Japan, can hardly be defined by luck.

“I guess when I say luck, there were gifts that I was given upon birth. I’ve just been lucky that I was naturally athletic. I guess I had a good foundation,” Omega told SLAM! Wrestling. “I don’t know how old I was, but my dad was a real big sportsman, but I was naturally good at all sports. It didn’t take long for me to get used to the footing, the balance, the punishment that’s required, the physical toll that it takes on your body for wrestling. There were things like that I had an early edge on. Does that make sense? So when I say lucky, I guess I don’t mean I flipped a coin and things worked out. I did naturally have an early edge when I started.” 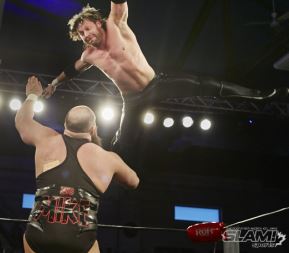 Kenny Omega flies onto Michael Elgin during their bout in Toronto in May during a Ring of Honor TV taping. Photo by Andrea Kellaway, www.andreakellaway.com

That edge has always been there, as has a decidedly goofy side; as he has rocketed to the top of the NJPW roster, much of that silly side has been sidelined … aside from running with his mop since “The Cleaner” nickname didn’t quite work out as planned. The Cleaner was intended to be a reference to the mysterious men who go clean up crime scenes, like Harvey Keitel as Winston Wolf in Pulp Fiction. It made sense in the context of the Bullet Club faction, which Omega essentially now fronts.

“We had the big meeting before I made my debut. It was sort of like, ‘Yeah, if you’re going to join the Bullet Club, we don’t want you to be Kenny Omega. We understand that Kenny Omega is a sort of a otaku character. We know you like video games, you don’t have to cut that out, but the image is too bubbly. I agreed. It had to change. You can’t show up and be a bad guy that doesn’t want to speak Japanese but still wear green, orange and yellow. So we wanted to dark,” he said. [“Otaku” translates roughly as someone obsessed, often over video games or manga comics.]

They aimed for a new image, while maintain his physical conditioning, and, for the most part, his wavy hair.

Trying to relate to the Bullet Club, which makes a gun symbol with their hands, he ran through ideas like Hitman (been done), Assassin (ditto), Machine Gun (now in WWE as just Karl Anderson).

It’s worked out as The Cleaner, but only because of that skill set that Omega had from earlier bouts that highlighted comedic aspects allowed him the flexibility to run with it.

“It was actually suggested that maybe I should be a cleaner. I didn’t really understand at first when they had said, ‘Okay, what do you mean by that? Like a janitor?’ It was, ‘No, no, no, it’s the guy that cleans up evidence for the guy that does the hits and stuff, and they’ll clean it up so there’s no trace of what had happened.’ I was like. ‘I think there’s probably going to be confusions, but because of that, it’s cool.’ Sometimes Engrish, you can’t come up with your name, it has to be given to you.”

At first, Omega played it straight, but he was indeed thought to be a janitor, a custodian. “I always kept explaining, ‘No, no, it’s not that. You know, when a guy gets murdered and the site’s all contaminated, and they clean it up.’ It was just such a long explanation every time, and I was always making new fans, because we were expanding and branching out as a company, I just thought, ‘I’m just going to embrace this. For the guys that know what I’m going for, that’s cool. But I’m going to start coming out with a goddamn mop and broom.’ It is what it is. I don’t even know what it is, but now it’s just me horsing around and just having fun with it, which is great because the company and I have established a good trust connection, so they trust where I’m taking anything or any character choice. But before, if I had busted out of the gates with that, that would have been a no-no.”

It’s not all that different than busting out of the gates in Japan. You don’t just start out at the top of the New Japan roster. Omega got there through time, through years with smaller promotions, like DDT.

“I’m a very loyal type of guy, whereas if people believe in me, I will give them my all, and I will commit to them just as much as they’ve committed to me. So for a company like DDT, who first trusted in me, gave me the chance to break out in Japan, a relative unknown,” said Omega. DDT had a more comedic flair than some other promotions. “I made it my goal and my purpose in Japan to make them bigger, to make them a force within the Japanese wrestling community. Between myself and [Kota] Ibushi, I think we really did that.”

After a half dozen years, Omega felt that it was time for something new, that his journey in DDT had concluded.

“That’s when I embarked on my own personal journey, and that’s where my figurative checklist is in hand, and I’m checking off the life goals, the goals that give my life meaning and give my career purpose. That’s what I’m doing in New Japan right now. I’ve just been lucky where I’ve been able to check these things off quicker than I ever thought I’d be able. That to due to, like you said, Internet, social media people getting behind the product, people getting behind me, which is great. I’m just being me and trying my best.” 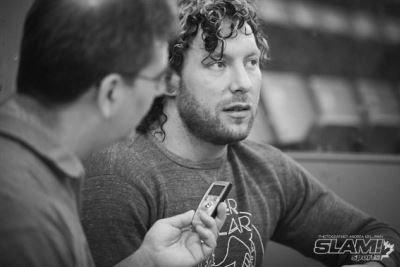 Once again, there’s that word luck.

“I always looked at the long term, and I always looked at becoming a legend in Japan, and what are the steps that are necessary to take to become a legend,” mused Omega. “You definitely need to have match of the years, you have to, you have to stand out. You have to have made companies money. You have to have had a connection with the fans, with the people. Back in the day, if you look at a guy like Stan Hansen or Bruiser Brody, they were just larger-than-life personalities, humongous figures. People, for example with Stan Hansen, they know his entrance music, they know the way that he would enter into a building, swinging the rope. I don’t have a character like that, so for me to connect with the fans, I just wanted to be myself. But I wanted to be myself but communicate with them on a deeper, more intimate level. So, yeah, I learned Japanese. Things like that. Anyone can make these choices in life, but I lucked out — again, there’s that word again — I lucked out that learning Japanese also led to a lot of other opportunities: me going on TV, getting all these interviews and stuff. It got the word out that I was doing wrestling and people watched my wrestling, and it all snowballed from there.”

Could Omega have survived in the 1980s in All-Japan or New Japan, when the two promotions offered some of the greatest professional wrestling matches in history?

“Athletically yes, I think so. I definitely think that from an athletic standpoint, I could have done that style, the junior style. But, would I have had a creative outlet to do the things that I have done? Probably not. Definitely not,” he said. “I would have had to have been like Serious Kenny the entire time. I think eventually I just would have cracked, I would have went insane. But yeah, I have comedy matches, I have serious matches, I have off-the-wall zebra pro wrestling kind of matches. I like have a variation, but when it comes right down to it, I won six match of the year awards in Japan. I know how to wrestle seriously. I can do it better than anybody — and I mean literally anybody, anybody on the planet.”

No offence to Michael Elgin, who is relatively new to stardom with New Japan, but Omega is Canada’s greatest export to Japan. Thanks to the reach of New Japan’s Internet service and TV show in North America, his following is far bigger than just in the Land of the Rising Sun.

“Now that there’s the WWE Network, there’s social media, there is Ring of Honor, which is attempting to bridge the gap between the Japanese market and the U.S./Canadian market, people are becoming sort of more familiar with my face,” he said. If I actually step out in public when I’m back home in Winnipeg, people do recognize me — and that’s crazy to me because I think they must be mistaken. It’s just never happened, and now it’s happening. But it’s really cool, because I’m glad that what I’m doing over there, it can be seen and people can enjoy it, they can understand it. Even if they couldn’t understand it in Japanese, now we have the Ring of Honor guys going out there to do English commentary. Everything is becoming more worldwide and globally-friendly.”

Sunday’s New Japan Dominion show was originally scheduled to have Omega defend his IWGP Intercontinental Championship against Hiroshi Tanahashi, but Tanahashi is out injured. Elgin and Omega had the first-ever all-Canadian singles main event in Japan April, so it was a natural to pit them against each other once again. The co-main event for Dominion in Osaka is Tetsuya Naito defending his IWGP title against Kazuchika Okada.

Omega could only laugh at the memories of previous ladder matches he was in. And while he was talking about facing Tanahashi while this interview was taking place in May during a Ring of Honor TV taping in Toronto, it applies equally well to Elgin.

“If people think that’s going to be me against a blow-up doll or a nine-year-old girl, no. I’m looking for a match of the year candidate. And if people expect any less, then, I don’t know, it kind of makes you sad,” he said with a chuckle. “My expectations of the match are high, and I’m really hoping to do something revolutionary in Japan. I mean, American, Canadian fans have seen ladder matches on TV since their teen years probably. They’ve seen a bunch live on the indies. I remember actually in my indy days when I was in Canada, I’ve done three or four ladder matches for free! I wasn’t paid at all, I wasn’t even paid five dollah.”