Gypsy Joe, who died on Wednesday night, carved out a reputation as one of the toughest wrestlers in the business, and competed into his 70s.

He was born Gilberto Melendez and was originally from Puerto Rico, where he always claimed that he began wrestling around 1951 when he was 18 years old. (Note that there was another Gypsy Joe in the 1950s in the United States.) 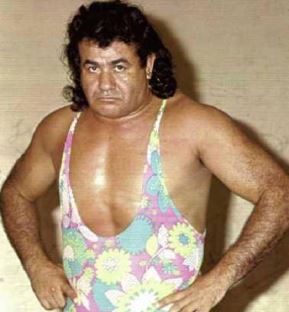 Melendez made his way to the U.S. in his early 20s, and took various jobs, including working on farms and loading and unloading trucks. After trying his hand at boxing, he fell for pro wrestling, and became an undercard wrestler in the WWWF territory around 1963. Through the years, he also worked as Gene Madrid and under a mask as El Grande Pistolero. In Detroit, he was Aztec Joe. Under a mask around 1966-67, he was half of The Blue Infernos with Frankie Martinez in Tennessee and Alabama.

Like most wrestlers in the territorial era, he made his way around the circuit. In Canada, he worked the Toronto territory for Frank Tunney in the early 1970s early in the card, and then in Montreal with Grand Prix, he gained fame for his violence.

The best-known runs for Gypsy Joe came in the American south.

“My first memories of Joe are of seeing him on Georgia Championship Wrestling and Memphis Wrestling,” wrote wrestler/historian Beau James on his website, kingofkingsport.com. “It did not take long watching Joe that you knew he was a rare breed of man. He would hit his opponents with his famed over hand chops and headbutts and you never doubted if they connected or hurt.”

The toughness and thrill of the violence never seemed to leave Gypsy Joe. He found a home for many years in All Japan Pro Wrestling in the 1970s and 1980s, absorbing whatever was swung his way, whether fists or chairs. As Japanese wrestling splintered off into many promotions, including some dedicated to ultra-violence, he continued to find work. According to Dave Melzter of The Wrestling Observer, he wrestled as late as 2002 in Japan.

In 2007, WWE Magazine named Gypsy Joe the world’s oldest wrestler at the age of 73, and he worked here and there for at least another four years after that.

His health gave out around four years ago. He had rickets and gout forced the amputation of his foot, and then his leg was removed as well.

“I always said that he’d die in the ring,” his daughter, Jenee Beal, told reporter Jeff LaFave of the Chattanooga Times Free Press. “Being a wrestler, there is no benefit. There’s just no safety net for those people who do this for a living.”

He continued to fight his ailments, including memory issues, and made appearances at local wrestling shows and reunions.

Manager Izzy Slapowitz recounted one meeting with Gypsy Joe on the WrestlingClassics.com newsboard: “Tough doesn’t even come close to describing him. I was at a reunion this past September and Joe was there, in a wheel chair. Ralph ‘BigBoy’ Williams was also there in a wheel chair(temporary). Joe wheeled himself over to Ralph and smacked him in the chest, Ralph smacked back. What followed was an hilarious , to those of us watching, wheelchair wrestling match with the two of them hitting each other with hard smacks, forearms, headlocks etc, until finally Big Boy yelled ‘I quit, I’m blowed up.’ Joe who wasn’t quite ready to quit himself, proceeded to pick up a folding chair, and repeatedly hit himself over the head with it, until someone, I forget who, stopped him.”