LAS VEGAS — From heart-felt family bonding to rambling powerlifters to a trailblazing woman, the Cauliflower Alley Club banquet on Wednesday night offered a little bit of everything. 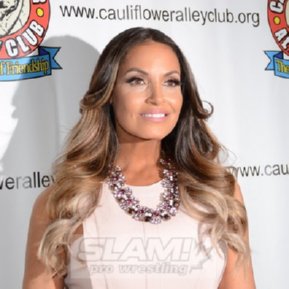 It was Trish Stratus in the main event, as the first female recipient of the Iron Mike Mazurki Award, the most prestigious award in the wrestling industry. Voted upon by her industry peers for her contributions both to wrestling and the world outside, Stratus joins the likes of Mad Dog Vachon, Woody Strode, Bobby “The Brain” Heenan and Stu Hart as past honourees.

The seven-time WWE Women’s champion said she was proud to be “accepted into the boys club.”

Growing up in a large extended Greek family in Toronto, she talked about loving pro wrestling and Wonder Woman equally. After fitness modelling got her noticed, she started training with Ron Hutchison at Sully’s Gym as a pro wrestler.

“She had what I call the ‘It Factor.’ She was born with that,” said Hutchison when bringing Stratus to the stage. The evening’s emcee, Mean Gene Okerlund, said something similar, saying that “the presence she has in and out of the ring is second to none.”

Stratus talked about knocking down barriers, starting as a valet in WWE. “I worked my whole career to earn the right to be called a woman wrestler.” She thanked many of the people who helped her along the way, “letting me unleash my inner Wonder Woman.”

The semi-main event, however, was easily the most emotional part of the evening at the Gold Coast Hotel & Casino.

“It’s not very often that you get to present an award to your father after a prestigious career,” said the younger Orndorff, who then led the fans with a mocking chant of “Paula.”

He told many funny stories of living with a “royal pain in the ass” who loved his family. Like how Dad used to come to his baseball games in the pickup truck, setting up a lawn chair in the back to suntan. Or how they left the building after Orndorff turned on Hulk Hogan in an ambulance.

When Paul Orndorff got to the stage, he had to collect himself. “I have a very weak heart, give me a minute,” he said in his raspy voice damaged even further by throat cancer. After getting it together, he talked of his love of wrestling: “When I got into the ring, it was all emotion, buddy.”

Orndorff shared details of his rough upbringing, how sports saved him, and how professional wrestling was his eventual destiny, training under Hiro Matsuda and Eddie Graham in Florida. He eventually retired, reluctantly, after the fourth time that he broke his neck. “Wrestling was my life and I wouldn’t change one thing that I did,” he concluded. 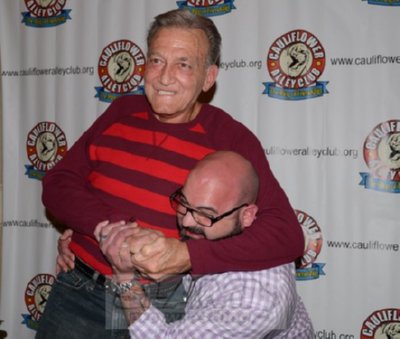 Paul and Travis Orndorff goof around.

Then there was Ken Patera, whose speech was more than a bit rambling. The warning came at the beginning, when he asked, “Do you have another beer?” He was the first to test the CAC’s 15-minute policy for honourees, going seven more minutes after his warning.

He got distracted here and there, pointing out people in the audience and lurching into a story about that person. Mentioning the High Flyers, Greg Gagne and Jim Brunzell, Patera got a response from Gagne: “We’re two of the few still listening.”

It isn’t that Patera wasn’t genuine. He talked about his many weightlifting and powerlifting accomplishments (“I used to be famous”), but said the “highlight of my life was really my 20 years in wrestling.” He was also funny and uncouth — did he really pee in the corner? He also drew laughs that shouldn’t have been laughs when he talked about witnessing the massacre of Israeli athletes in Munich in 1972.

Patera finally wrapped it up, noting that he still had two more hours worth of material, with a description of his plaque: “Holy Christ they gave me an award. It says, ‘Take the next bus out of town, Patera.'”

The Lou Thesz/Art Abrams Lifetime Achievement Award was presented to Arn Anderson by his former manager in the Four Horsemen, JJ Dillon.

To Dillon, Anderson was “an artiste” with “his own unique style of interviews … when Arn talked, the people listened.” His toughness was key as he worked through nerve damage at the height of the run of the Four Horsemen.

“When you talk greatness, it’s respect,” said Dillon of Anderson, tearing up as Double A came onto the stage to receive his award.

Anderson chuckled over the award, which also has been presented to Michael “P.S.” Hayes. “How did Michael Hayes and I get on that list? Moonwalking and getting my ass kicked every night?”

“The Enforcer” was to the point — “This business does not owe me anything” — and thanked a number of people in the room, including announcer Jim Ross who always sold the strength of his (injured) left hand for knocking people out.

Anderson also paid special tribute to the wives, the children and the extended families in the business. “They’re the ones that patch us up, prop us up, and shoot us out the door”

An announcing award was given to Memphis’ Lance Russell by Jerry “The King” Lawler, who said that the “illustrious audience” is perhaps greater than the WWE Hall of Fames he has hosted.

Lawler called Russell “the voice of my childhood.”

“That voice was probably the most important part of that Saturday morning wrestling show,” said Lawler, “that one constant was that voice that you listened to.”

“The King” also talked about how important Russell was to his own career — “If it was not for Lance Russell, there were not be any Jerry Lawler in this business.” On spec, a teenage Lawler sent his artwork to Russell, and after it was shown on air, found himself a regular before the Memphis audiences.

The 90-year-old Russell didn’t speak that long, but it was meaningful. He was funny, cracking that a list he had was “not my speech, this is the list of my pills.”

“It’s been great to live through it,” said Russell. “I was the most fortunate person in the world.”

The Jason Sanderson Humanitarian Award went to Sue Aitchison of World Wrestling Entertainment. Her job for the last 30 years has been to organize the wish granting for sick children and adults.

Ricky Steamboat did a run-in of sorts, going on stage unplanned. He saw the award as a tribute to people behind the scenes at WWE “that grease the big machine.”

“My heart’s been out there for this woman, as she’s been there for me 24/7,” said Steamboat.

Aitchison agreed that there is a lot that goes on behind the scenes, and asked the members of her team that were in attendance to stand up and be acknowledged. “It takes a team to grant a wish,” she said, mentioning the organizers, photography staff, and film crews.

“My job is to make WWE superstars look good,” she said. “It is awesome to witness the smiles that you bring to the children when you walk in the room.”

To conclude, Aitchison pulled out a set of Mickey Mouse ears and asked to be referred to as “the Mickey Mouse of the World Wrestling Federation.”

The first award of the evening was a newly-established one, the Charlie Smith Referee Award, named after the 80-year-old referee from the Carolinas with the scratchy voice and the plethora of stories.

WWE announcer JBL, looking around the room, said that he felt “like a big, fat kid at a pizza buffet with all these legends” in the room. JBL was there to introduce his long-time friend, James Beard, whom he said was the “best referee I ever worked with.”

Beard said that it felt strange to be a referee at the microphone, but confessed that it was great that the often misunderstood role of the referee was being celebrated.

The emcee was Mean Gene Okerlund, who set the tone early: “I’ve been legally drunk I think three nights in a row now,” he cracked.

There were also items auctioned off to raise money for the CAC’s benevolent fund, including tights from Paul Orndorff, a table cloth signed by all the honourees, and a painting of former CAC president Nick Bockwinkel by artist Rod Schamberger went for $3,500.

Awards handed out on Tuesday included a tag team award to The High Flyers, Greg Gagne and Jim Brunzell, the Reel Award for acting work to Pepper Martin, and the Red Bastien Friendship award to Patsy Hughes and Emily Miller.