LAS VEGAS — There is a definite void this year at the Cauliflower Alley Club reunion, with a number of key members of the organization not here.

While top of the list is past president Nick Bockwinkel, he’s hardly the only one.

“Tricky Nicky”, the former AWA World champion, died earlier this year. His wife, Darlene, was out mingling with friends on Monday night at the Gold Coast Hotel & Casino. There will no doubt be many mentions of him at the upcoming Baloney Blowout — named in his honour — and the banquet on Wednesday night. 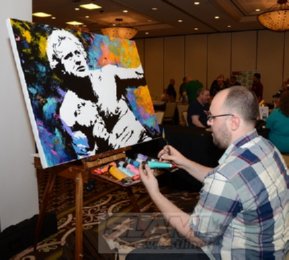 Artist Rod Schamberger works on his painting of Nick Bockwinkel at the Cauliflower Alley Club reunion on Monday, April 11, 2016 in Las Vegas at the Gold Coast Hotel & Casino. Photo by Brad McFarlin.

Also passing away this year was Bob Leonard, the long-time Stampede Wrestling photographer and promoter, who was on the CAC’s board. He had many responsibilities with the club, including organizing the seminars. His wife, Winnie, daughter Christi and granddaughter Jade (taking her first plane trip) are all here.

Then there is the serious health challenges facing Ruth Silverstone up in Washington State. Ruth and her husband Dean have been a part of the CAC forever, and are responsible for many things, including the list of members and who paid for dinner. When she fell and went into a coma not long ago, it threw a lot of the organization into chaos. She is improving, but neither are in Las Vegas.

While on the subject of wives, also gone is Barbara “Babs” Lauer, who was the wife of long-time executive Karl Lauer. She hadn’t been in good health for a few years, so had not been out recently, but again, it’s a void.

“She knew all the boys,” said Karl Lauer, a former wrestling promoter who is still heavily involved in the club even if he stepped away into a kind of retirement. (Wrestling being like the mob, and just when you think you’re out, you get pulled back in again.)

However, for all the sadness, there’s lots of gladness too.

And you could create a pretty damn good wrestling card with names like Sgt. Slaughter, The Grappler Len Denton, Bobby Heenan, The Destroyer Dick Beyer, Flying Bill Anderson, Pepper Martin, Ken Patera and No Class Bobby Bass (who is not a jobber, despite what he may claim).

Old stories are being swapped around and new ones are being created, but there is just no avoiding the void.