Cornette and Sullivan Florida DVD has too much Graham

I was looking forward to viewing the latest release in the Back to the Territories DVD series with host Jim Cornette and his guest Kevin Sullivan discussing Florida.

The production value are still there, making these still the best DVD in the so-called shoot interview market.

It’s not that it was not interesting, it’s just that I was expecting details about the territory throughout the years not just anecdotes about Graham.

It was still very informative. 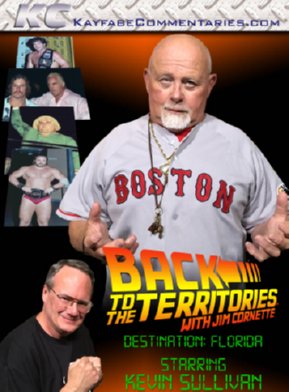 It is interesting to know that places like St. Louis, when they didn’t know what to do for a finish, they would call Graham for a suggestion. Graham could come up with very intricate finish sequences that lasted minutes — something you did not get everywhere.

Also if you want to learn who influenced Dusty Rhodes for what it is now known as the infamous Dusty Finish, this DVD is for you. And no, it was not Eddie Graham.

As far as Graham goes, they explain how he booked his wrestling and that make perfect sense. You need to make people want something before delivering it to them. The important thing is how you set things up.

We can only wonder what wrestling would be like if such a wrestling genius was still with us, though he did mentor Rhodes and Bill Watts, both of whom shaped a lot of what we saw in the past three decades of wrestling outside of WWE.

They also discussed the idea of a territory becoming scorched earth, meaning that it had been burned by going too much in one direction (like blood and guts). A territory needs a little of everything to survive over the long haul.

According to Cornette and Sullivan, today’s product is split is so many small groups with totally different products to satisfy very specific fans that it cuts everyone but WWE a very small portion of the pie. And because of that, the piece won’t get substantially bigger. It’s a very interesting theory.

Obviously, you could not talk about Florida with Kevin Sullivan without talking about his devil worshipper gimmick. That part is real informative with him explaining the origins of it and that at no point was the devil ever mentioned in his promo. I loved the snake anecdotes as Sullivan used to carry one before Jake Roberts made it part of his gimmick. It makes you dream about how much fun it must have been back in the days of the territory as fans would bring snakes for him to use on the show!

If you know nothing about Florida or Eddie Graham then you must see this DVD; if you knew a lot already, it will be fun but you won’t learn a lot of new things. It is kind of a mixed bag, like the DVD with Lance Storm about Calgary. It seems to me that Florida should have gotten a little bit more research to bring it to the level of the Mid-South and Mid-Atlantic releases.