The YouShoot with Vince Russo is a real melting pot. 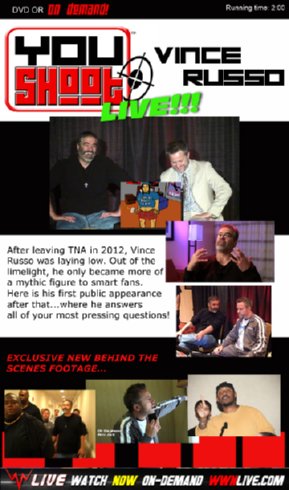 Kayfabe Commentaries has edited what was originally an Internet pay-per-view event, and spliced in a more recent Russo interview trying to explain some of it. They also have New Jack asking a question to Russo — and his question is more interesting than half the people they selected.

Russo, one of the driving forces behind the WWF’s Attitude Era and a key scriptwriter in WCW, is an expert on dodging the question – when a hard question arises, he counters with something else entirely or blaming it all on misinformation. He’s even worse at remembering things.

The most insightful thing had to do with scripts in the WWF. Russo insists that Vince McMahon never shredded a script, but would pick what was there and enhance it. It was the only professional way to do it, according to him. Yet he still claimed in the same interview that McMahon was not his editor. Go figure.

He also confirmed what we had heard before by Disco Inferno that he wrote TNA trying to get along with everyone. This is good insight, as the only way to present a wrestling product is with one vision, and not by trying to make everyone happy around you.

I will grant him that his statement that committee writing is killing wrestling makes a lot of sense and makes you wonder why Russo can’t see so many other aspect of the business in a more open fashion.

It all comes down to wrestling versus entertainment — you need the right balance of both. Russo will always tip the scale toward entertainment while the most hardcore fans will always tip toward wrestling. The most popular version of the product is somewhere in the middle. In 2016 the evolution of the business is bringing it closer and closer to wrestling … at least for now. Russo is blind to that even in more recent interviews.

More and more people are expecting a certain quality in the performance that would make some performers from the past unable to get over in today’s market.

Does Vince Russo realize some of his ideas were terrible even if he was entertained by them? Apparently not, since the Judy Bagwell on a pole match is still one of his favourites. I finally understood Russo after that, in that he can’t see the difference in what he finds funny and what the masses will find entertaining.

His polar opposite, Jim Cornette, said it best: “There is no money in funny.”

Russo should have realized that his job was to create interest in the product and characters to generate money not to make everyone in the family chuckle.

The release was much better than I was expecting, but still it is for the most hardcore of fan and can only be enjoyed by someone who has gotten over some of the most cardinal sins of Russo’s writing, like making David Arquette the world champion.

That miscue he addresses, pointing out “television ratings means everything.”