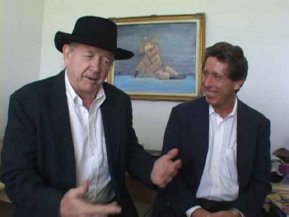 If one were to liken the Internet Wrestling Community to a town, Mark Nulty’s Wrestling Classics website and message board has been the tavern of choice for old-school fans to chat, discuss and vent about what is good and bad about the sport they love. The end of his battle against lung cancer deprives the IWC of a knowledgeable barkeep.

But he was more than that, of course.

Mark was a husband to Erin, father to Evan, friend to many. He was only 55.

I can’t pretend to know Mark that well, but I will date myself here describing an early point in our relationship.

A trained journalist, Mark Nulty was a host on the last days of Texas All-Star Wrestling and used his connections and friendships in the wrestling business to begin to build up a decent collection of video footage, which he peddled at WrestlingClassics.com.

In the days before anyone could do a website, he was an early supporter of the burgeoning online world, and set up websites for the likes of Lou Thesz, Jack Brisco, Frank Dusek and Ivan Koloff.

With Canoe.ca entering the Internet waters in March 1996, and SLAM! Wrestling following that fall, it was natural that Mark and I end up dealing with each other. He had access to wrestlers and we needed content.

He helped us line up some of the wrestlers he was connected with, and that lead to other things down the road.

We finally met in Las Vegas, at a Cauliflower Alley Club reunion. One year, I remember him letting me use his laptop in his room, since he had paid for the ridiculously high fee for an Internet connection in the hotel. Hey, it saved me from heading to the bail bonds / Internet cafe that I’d used the year before.

Mark was protective, both of his friendships with the older wrestlers and of the business to an extent. He could come off as a big arrogant, and there are some who chaffed at his rules for posting at WrestlingClassics.com.

But while you might but heads with Mark at WrestlingClassics.com — or the fabled Crimson Mask, the lead historian/policeman at the site — you always went back.

WrestlingClassics.com is a community, and it has never stopped being one over the last 16 years.

He was the knowledgeable host, the keeper of the inn. We all came and went, some posting multiple times over the course of the day, others lurking and not posting at all.

The site welcomed the wrestlers too, and before there was Facebook, Twitter or other social media, WrestlingClassics had flame wars spurred on by Playboy Buddy Rose, or thoughtful question and answer sessions with Lou Thesz.

I like what fellow historian Tim Hornbaker wrote on the WrestlingClassics board, in the posting about Mark’s passing:

Mark built a haven for fans, researchers, and historians to collaborate – a one-of-a-kind realm for new research finds, interesting stories, and general news. His gracious attitude and insight into the business was always personally appreciated. I learned a lot from him, and of course, from the people at this site. My thoughts are with his family and friends.

The news of Mark Nulty’s death came out of the blue.

A cough that didn’t go away lead to the awful news that it was lung cancer. He took the treatments, the chemotherapy, and fought the good fight, but the cancer spread. And spread. Once it was in his brain, it was only a matter of time.

We often mock the Internet Wrestling Community for its goofiness, for getting inappropriate chants going at shows or uniting in its hatred of, say, John Cena.

But the Internet Wrestling Community is about far more than that of course, and a treasured member is gone.

Consider this your 10-bell salute, Mark.

Thanks for all you did for us.