In recent months, fans of TNA Wrestling have seen a number of new talents come into the company. Judging from the crowd reactions, one of the most popular new arrivals is the flashy and dynamic “White Lightning” Mark Andrews, or as he’s been called, Mandrews. The fan favourite makes his live Canadian debut when he appears for SMASH Wrestling in Toronto, Ontario, this Saturday.

“I’m excited to be coming to Canada,” the Welsh star told SLAM! Wrestling in an exclusive one-on-one. “I hear the fans in Canada are awesome, so I’m psyched to be wrestling in front of them. (Wrestling in) Canada is definitely something I’ve wanted to tick off the list for a while.”

The concept of ‘a while’ would be kind of an amusing thing to hear from most 23-year olds — but in Andrews’ case, it’s entirely apt. Considering that he’s been wrestling since he was only thirteen.

“The first match I ever saw was the three-way tag ladder match from WrestleMania 2000,” he explained,” and I loved it, and that prompted me to start training.” 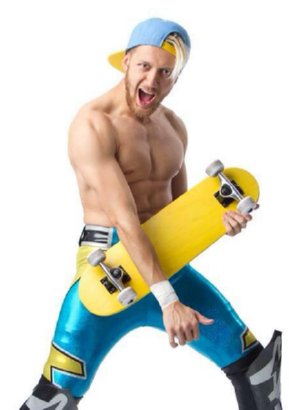 With the support — and the wheels — of his parents, Andrews did what he could to make his dream a reality.

“I think my parents thought it was a phase that would die out in a year or two — actually, my mum was convinced it was a phase up until I got signed by TNA,” he laughed. “Both of my parents have been incredibly supportive, and I wouldn’t have any success in wrestling if it wasn’t for them. My old man used to drive me six hours to go and train.”

A quick study, Andrews was put into matches less than a year later, and literally grew up in the business.

“I was one of the first students at the school where I started training, and the school was relatively new — so even after my first year, I was one of the more experienced guy there,” he said. “Soon after my first match, my trainers decided to put me in a mask, because a 14 year old boy probably shouldn’t be wrestling grown men in front of large crowds. With the mask, people could assume I was older!”

From there, his career took off, appearing for a number of promotions throughout Wales and the rest of the UK, and building his name on the international scene as well, including North America, where he wrestled for Pro Wrestling Guerilla. In addition, Andrews became one of the pillars of Britain’s ATTACK! Pro Wrestling.

“Being with ATTACK! was the favourite time of my career,” he noted. “We set up the promotion because we wanted to get some exposure for underrated talent in the UK, and it soon became the funnest promotion to work at in the country. We have light hearted, gimmicky shows where we all dress up as various characters and perform under themes. We’re all real life friends too, so those shows are definitely some of my fondest memories.”

But far from being pigeon-holed into comedy-style matches, Andrews earned himself a reputation for putting on some of the best in-ring performances in the country. Indeed, in 2014, Andrews earned him several accolades from the fans and the media, including being nominated for a number of Fighting Spirit Magazine awards, including for Match of the Year.

His performances also got him noticed by TNA Wrestling, and Andrews was called to compete in the company’s UK showcase, British Bootcamp, a competition to earn a TNA contract.

“That was an awesome experience,” he beamed. “That was my first real experience with TV stuff, so it was quite the learning curve. I got to be apart of it with a load of other British wrestlers too, and because our wrestling scene is so intimate, we were all friends beforehand anyway, so we got to have a lot of fun whilst doing it.”

After winning the 2014 edition of the show, Andrews was signed by the company, debuting in January 2015 in New York.

“That was rad! Being thrown into a cage match with Brodus Clay on my second day wasn’t what I imagined was going to happen, but I was psyched for it!”

Since then, Andrews, under the ‘Mandrews’ moniker, has been a regular on the show, thrilling fans with his high-flying style.

“It’s been a massive learning curve, just like Bootcamp was. But I’m really happy with how it’s going.”

A particular highlight was going on the company’s UK tour, which allowed Andrews to fulfill another dream: “Wrestling in Wembley Arena… that was surreal.”

In terms of other goals, for now, Andrews is content to ride the wave of success he’s currently on.

“For the first time since I started wrestling, I’m kind of taking every day as it comes,” he said. “In a year’s time, I’d love to say I’d held the X-Division Championship. And after that, really I just hope that every year is better than the last.”

What he is pretty sure about, though, is that he does know there is a limited time to a wrestling career, and he’s realistic about not being able to do this forever.

“I’m not looking to wrestle until I’m 50 — in ten years time, I will definitely have slowed down.”

And it would seem that he’s poised himself well to do so when that day comes, having earned a university degree, and having started up his own business – a clothing company named DEFEND Indy Wrestling.

“My two friends, Eddie Dennis and Pete Dunne, were all getting a bit fed up with the wrestling scene getting more and more negative. And we saw that wrestling merchandise had gotten a bad rep for years for being incredibly unfashionable. We decided to create an alternative clothing brand which offered the type of clothes that we liked. It’s gone from just T-shirts to caps, jackets, flags, and more. That’s definitely been rewarding.”

As if that’s not enough, when not performing or coming up with designs for the company, Andrews also leads a band, a pop-punk band called Junior.

“I originally played guitar, but now my role in the band is vocalist and bassist. I actually use one of my band’s songs for my entrance music.”

Bringing his music into his wrestling life has been tremendously rewarding for Andrews, as it allows him to blend both of his major life’s passions.

“The truth is, I don’t ever have to do just one. I remember when I was 13 or 14, (hating) the idea that I had to choose either wrestling or music – in fact, I started wrestling training just after I started taking guitar lessons. But I decided to focus more on wrestling, so that took the leading role for the last 10 years. It was only once I graduated from college that I realized I had more spare time on my hands so decided to start writing music with my pal Matt.”

“Now,” he continued, “I’m back in a similar position to where I was when I was 14, having to juggle the two. Hopefully within a few years, I’ll have a career in both wrestling and music. For right now, professional wrestling is my career, so obviously I’ll be prioritizing it.”

Which is good news for those that attend the SMASH Wrestling show this Saturday night.

“I’m looking forward to the show, and to meet the fans – both those who know me, and those who will be seeing me for the first time. And I hope they enjoy my stuff.”

Bob Kapur once spent eight hours pub-crawling in Wales — and can’t remember much of that night. E-mail him the incriminating photos at [email protected].