The Undertaker book a fitting tribute

How big of an Undertaker fan am I? In my dresser, there is an Undertaker T-shirt I have had for 21 years. It is always immaculately folded and looking at it, you would think it was perhaps only a few years old. That’s because I only wear it on special occasions. In the past, it seemed appropriate to wear on Halloween. I have also worn it whenever Taker has been involved in a World Heavyweight Title match on a PPV or took part in a local WWE house show, sort of like how sports fans wear their favourite jerseys to cheer their teams on.

Yeah, I am odd like that when it comes to wrestling. 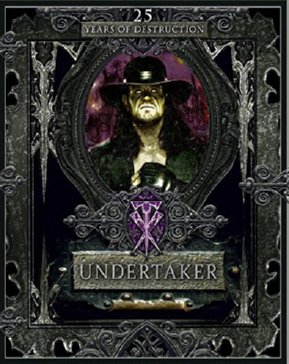 From the moment Brother Love introduced the world to Mark Calaway as The Undertaker at the Survivor Series in 1990, I was immediately fascinated. As a life-long wrestling and horror movie fan enjoying everything from the Universal monsters of old to the modern horror icons such as Jason, Freddy and Pinhead, The Undertaker was the best of both worlds as far as I was concerned. When he first sat up like Michael Myers from the Halloween movies and Paul Bearer (reminding me of John Astin’s Gomez Adams from The Addams Family) joined as his manager, I was a fan of Calaway and his persona for life.

As we creep ever closer to what could be Calaway’s final match as The Undertaker at WrestleMania, it is hard to imagine a wrestling world without him. That is how much he has meant to his fans and to the industry itself over his 31-year career. It almost makes me wish the WWE would do what comic books do sometimes and pass on the mantle of The Undertaker to someone else. Sorta like how Bruce Wayne will always be THE Batman or Steve Rogers THE Captain America but other people such as Jean-Paul Valley (Azrael) or Sam Wilson (The Falcon) have donned the cowl and carried the shield. Have The Undertaker take a protégé under his wing and train him to be the new Undertaker, with a different name of course. Maybe The Reaper or something like that.

Yeah, I am odd like that when it comes to wrestling.

Opening with a brief tribute written by John “Bradshaw” Layfield, the 207-page hardcover biography chronicles The Undertaker’s rise from his first appearance at that unforgettable edition of the Survivor Series to last year’s grudge match against Bray Wyatt at WrestleMania.

All of his feuds, famous angles such as his Gravest Challenge facing Hulk Hogan at Tuesday Night in Texas to his rivalries with Kane, Mankind and Shawn Michaels are described in rich detail. There is a rogues gallery of his most feared opponents and there are separate spotlight profiles on Randy Orton, Mankind, Brock Lesnar, Steve Austin and Shawn Michaels. Sullivan even outlines the importance of the Undertaker’s urn and the notable appearances of his casket. 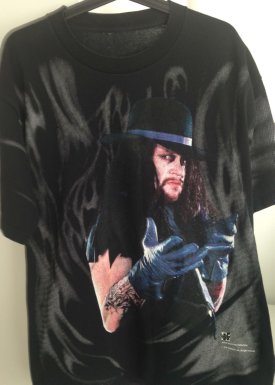 Enhanced with photos and statistical info, all of Taker’s pay-per-view matches are listed — yes, even his In Your House appearances — as are the gimmick matches he made famous.

Perhaps the nicest touch though is the tribute to Paul Bearer recognizing and honouring the importance William Moody played not only in the legend of The Undertaker but in the history of wrestling as well.

It is not just what is on the inside that will catch your attention though. There is some superb inlay work on both covers and the inside pages making 25 Years of Destruction a true collector’s item or an eye-catching coffee table book.

If I had to find any flaws it would be that besides JBL’s intro, there are no recollections from other wrestlers, industry insiders, historians, celebrities or members of the media and there’s no insider info. Readers can only get a complete picture of any subject if friends, family, colleagues and rivals share their thoughts and feelings. 25 Years of Destruction would have been more personal if those were part of the package.

It would have also been interesting to know why The Undertaker painted a teardrop under his eye in 1996 when he changed his look, were any of the motorcycles he used on camera part of his personal collection or the full story behind the end of The Streak, etc. This is the kind of information fans crave.

Kevin Sullivan’s comprehensive and meticulous tribute, celebration of Mark Calaway’s extraordinary career is a must-read, must-have resource for any wrestling fan, especially with a possibly poignant, bittersweet WrestleMania looming on the horizon.