Disco Inferno’s booking ideas just too far out there

Since I have been booking wrestling promotions on and off for 20 years, I always look forward to the Guest Booker series by Kayfabe Commentaries so I can explore the brain of some of the most influential and bright people in the industry.

He is legendary in the wrestling business for his out of this world ideas.

One of the most notorious was a concept to have Martians invade WCW, and turn the Canadian stable into Martians with antennae — so the antennae could be sold at the gimmick table.

I didn’t go in to this Guest Booker DVD review with high expectations, and I was right on the money.

I find it sad someone like Gilbertti has so little understanding of what actually sell tickets to a wrestling show. 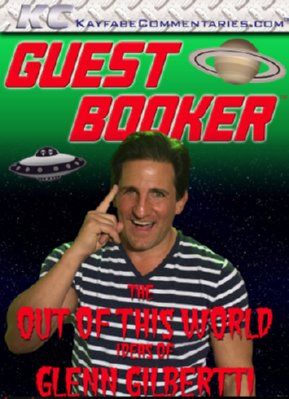 Yeah, it’s funny around the booking table; it will take the pressure off for a minute from the serious stuff you are trying to figure out. In the end, people buy tickets based on what they saw — silly doesn’t sell tickets, especially in the long run. Using a Gilbertti example, Jimmy Hart defeating Jeff Jarrett would turn me off from the product even if it would be unexpected.

So this brings us to Gilbertti, who believes he has the answers since he watched wrestling as a youth and has a good grasp on what worked.

But why can’t he put all the pieces of the puzzle together the right way is beyond me.

Gilbertti’s most interesting point is to try to keep up with pop culture and adapt it to professional wrestling.

I’ll agree with him on this, and you do need to keep up with the times. Since television shows are more complicated and logical than ever — look at Game of Thrones — then wrestling should be about building great storylines instead of just having a shocking turn of events for no reason as Gilbertti suggests.

You need to create television that will get the most ardent of fans to jump in the air and say: “Yes, that was awesome!”

From there you need to put out a product that can appeal to anyone, as the hardcore fan base can’t be the end all and be all. If you want compelling television, a child or casual fan should not be able to blow hole in your logic.

But I digress. Guest Booker: Glenn Gilbertti has its moments but it is far from a home run. We learn that he was part of booking committees more or less to entertain the other members by throwing ideas that no one in their right mind would have brought up. At the same time, no ideas brought up by him seem to have made it to television.

The most revealing part of the interview is his relationship to Vince Russo and Russo’s own relationship with Dixie Carter of TNA. We learn that Carter leaned on Russo way too much and that maybe Russo is guilty of wanting to please the boss too often. That sure goes a long way to explain things. In a sense, Disco Inferno is the Vince Russo of Vince Russo.

This release is a definite thumb in the middle at best, and it’s perhaps better as a shoot interview of Disco Inferno’s career than a look into his booking ideas.

Truthfully, you need to have a pretty advanced knowledge of wrestling to appreciate this and even then not all of it will be good.

As Jim Cornette said in a recent podcast, “Maybe, it’s good that all of those crazy ideas are out there, so we can make sure they never make it to television.”