I was a little worried about the release of the new Back to the Territories with Jim Cornette covering Stampede wrestling with Lance Storm as a guest. Storm got started in wrestling in Calgary and lives there but he never actually worked in Stampede. 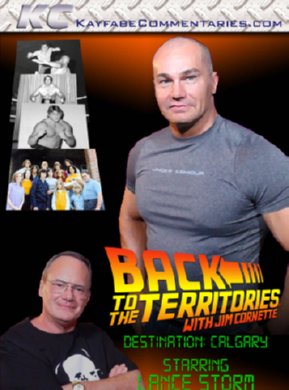 It’s the main reason it’s the weakest release so far in this series from Kayfabe Commentaries just because both just don’t have enough first-hand experience of the territory to really dig into the subject. Maybe if Heath McCoy, the author of Pain and Passion about the history of Stampede Wrestling, would have been with them to expand the information and the stories of that era we could have gotten a release on par with the previous two outing.

There is so little discussion about Stampede that by the end it turns into an history of the Hart family. Not that this part is not interesting but this was not what I was expecting about this series after the first two stellar releases about Mid-South and Mid-Atlantic.

They do bring interesting point about wrestling there being like fighting in the wild west and the heavy influence of European wrestling into the fabric of the territory. That point is interesting in making Stampede different from anywhere else. I wanted more.

They explain how Stampede also had arena matches on their television and not the squash match concept that was so popular everywhere else. A very valid point about this place being way ahead of its time. Once again I wanted more.

An interesting note, Jim Cornette actually brought up a Canadian survey we had done about wrestling as we were trying to get Mad Dogs, Midgets and Screw Jobs published, that clearly explained that there is more former wrestling fans than current wrestling fans. The survey also clearly showed how people in Calgary as well as in Quebec had the strongest tie emotionally to what their territory was and that they missed that in the current product.

They also explained the tape trading of VHS by fans around the world that went on in the 1980s and 1990s so fans could see wrestling from the different territories. Stampede was always something that tape traders were looking for, a product with a buzz maybe like a PWG or a ROH today. Kids, before YouTube and the Internet, you have no ideas how hard it was to find all those matches from around the world.

Storm has a good take on the appeal of the Hart family to Calgary. He has lived there for so long now that he gets the mentality of the area, including the announcer Ed Whalen, who would kill angle live on television or refuse to air it on the show. In fact, the tail end feels more like a shoot interview with Storm about his relationship with the city and the Hart Family than a trip down memory lane to the glory days of the territory.

This release would be a good introduction to the territory for people who have little knowledge of the Hart family beyond Bret and Owen. It is entertaining even if it really never brings you back to re-live the wild west of wrestling as Stu Hart came out of humble beginnings to see his family become the most well-known family of Alberta.