Bowman was star as Bill Sky and an Intern

Bill Bowman, who died on Tuesday, was both a proud U.S. Marine and a proud professional wrestler — though you might not have known him under that name.

He wrestled as Bill Sky for the most part, but was also one of the Interns under a mask.

Growing up in Mobile, Alabama, his father managed the local YMCA, so a young Bill came in contact with wrestlers from his early days, and tried his luck on the mats wrestling amateur. 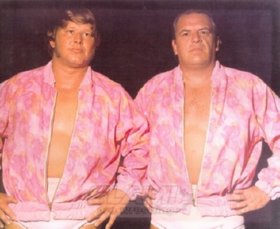 Before turning to pro wrestling, Bowman served with the 1st Marine Division in Korea during the Korean War, and stayed in the corps until the later 1950s. For the service to his country, Bowman will be laid to rest at Barrancas National Cemetery with military honors.

He was trained to be a professional by Charlie Carr, and became friends with Tarzan Hewitt, “Bullet” Joe Gunther, and, perhaps most importantly, Joe Turner, who would be his tag team partner for years.

Under the name Bill Sky — taken from a local shopping centre known as Skyland — he debuted in 1957. The early days of his career were spent on the undercards of shows in Louisiana.

The key moment came in 1964, when he rekindled his friendship with Joe Turner, who was a referee in the Gulf Coast promotion based in Mobile. Turner expressed interest in returning to active wrestling, and they decided to team up.

“With Bill, we said we were half brothers, but we weren’t really a blood relation at all,” Turner once told Steven Johnson. “He decided he wanted to go to the Tennessee territory and we went away as the Sky brothers.”

The Sky Brothers, billed from Dallas in cowboy boots and jeans, teamed on and off for 11 years. They held the Southern tag team title for the Nashville, Tenn.-based office in 1969 and also wrestled in Florida and Georgia.

Turner noted that he and Bowman were the first “Interns” team, ahead of the Billy Garrett-Jim Starr squad that started as the Medics. The Interns held the Gulf Coast tag team title four times in 1968, feuding with Lee Fields, his brother Bobby, or some other partner.

In 1968, their manager was the notorious Dr. Jerry Graham.

“Graham was living in Gulf Breeze (FL), a suburb or Pensacola,” Bowman told Scott Teal in a Whatever Happened To …interview. “He rented a place right on the water. He swam every day, and kept a dark tan all the time. That’s why he liked this area so much. When Joe and I got here, we went to the office on Monday morning to pick up our outfits., which came in from Karl and Hildegard. When we arrived at the office, that was the first time I met the man.”

Graham sure was something, said Bowman. “In the ten months or so we were together, it was like twenty years in the business. In constructive ways, but also destructive, with all his shenanigans. He knew the business SO well … the right type of things to do, so many different ways to draw money. At times, he was brilliant, but he was warped in other ways. As our manager, all he would do is sit at ringside and smoke cigars. If we threw someone out, he might take his cigar and burn them. All he needed to do was just one little move, and he had all the heat he wanted.”

Both Bowman and Turner were in the centre of one of the most famous promotional feuds. “In 1972 Atlanta promoter Ray Gunkel’s death caused one of the most famous eras in wrestling history, and Bill and Joe were right in the thick of it. Gunkel’s widow Anne decided to open her own promotion in opposition to the NWA office and most of the wrestlers went with her,” wrote historian Michael Norris. “Bill and Joe became one of the top tag teams with Ann Gunkel’s All-South promotion until its’ demise in late 1974.”

In 1976, Bowman stopped wrestling, settling down to manage a car dealership in Atlanta for many years. Next, the family moved to Pensacola, Florida, and he ran a few different companies, including janitorial, window cleaning and lawn maintenance. His wife, Anne, was a property manager.

While he may not have been an active wrestler, Bowman stayed involved through the Cauliflower Alley Club and the Gulf Coast Wrestlers Reunion, where he served on both boards. He was the host of the GCWR for many years.

During the last number of years, his health declined, battling heart and lung issues. He was moved to an assisted living facility and passed away on October 6.

– with files from Steven Johnson, Michael Norris and Scott Teal