While the wrestlers of AAA Lucha Libre prepare for an international stage at the company’s first live pay-per-view, the four men involved in dual main events are set to give fans a “dream match” and put the pride of a nation on the line.

Rey Mysterio, who competed in the first TripleMania in 1993, is making a full-circle journey at AAA’s showcase event Aug. 9 in Mexico City, Mexico, to face Myzteziz. Mysterio said he has always wanted to come back to AAA and told Antonia Pena, AAA’s founder who has since passed away, that he “would eventually return back home, to my roots, to the company that gave me the opportunity for the first time to be known nationally.” 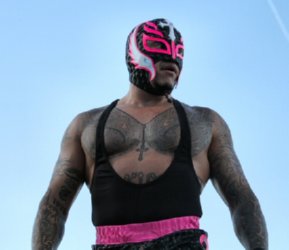 Rey Mysterio at a show on Sunday in Lowell, Mass. Photo by Bruno Silveira

After Mysterio left AAA in 1996, he said, Mexico created a new superstar in Mistico (now Myzteziz). Comparisons soon emerged between the two, setting up the possibility of a “dream match” down the line. Though Mysterio and Myzteziz have teamed together, they have yet to be on opposing sides, which Mysterio said makes their bout “once in a lifetime.”

“(Myzteziz) wants to go in there and prove to himself that after he became Myzteziz, there’s nobody better than him,” Mysterio said, “but he has to remember that before Myzteziz, there was Rey Mysterio. Myzteziz was just a baby boy when Rey Mysterio was already conquering the world.”

The dream match is one Mysterio said will be spoken about for years in the context of lucha libre history, but what the master of the 619 said he is most looking forward to is “giving the fans what they want.”

“This match was created by the fans,” Mysterio said. “Now that the match is finally here, they’re going to be able to see and judge for themselves who is the best.”

Another battle to see who the best is pits Mega Champion Alberto El Patron against Brian Cage, who made his AAA debut in February, in a hair match. The two have been locked in a war since Cage joined the company.

“Alberto is not only the champion, but the No. 1 guy in AAA and, obviously, the people’s champion,” Cage said. “I’m coming in, the loudmouth American touting how our country and our wrestling is better, and I’ve been proving it. And though I’ve had people jump ship in Mexico, obviously Alberto will be the favorite and the one everyone will be rooting for. It’ll definitely be a battle for supremacy and for representation of our individual homelands.”

The hair match has been about a half-year in the making, with “quite a few battles leading up to this point,” said Cage, who hopes their duel is the “match of the night.”

“(There has been) so much more build up to it and more story, more of a long-worked program… I think it’s going to make the payoff that much more meaningful,” Cage said.

Because wrestling in Mexico centers on “tradition, honor and respect,” Cage said a match in which either El Patron or he will have to shave their head — because neither wears a mask — is the “ultimate disgrace.”

“In Mexico, it’s like the biggest insult (or) risk putting your hair on the line,” Cage said. “So, it’s a real big deal, but I’m not worried about the outcome as my track record and abilities speak for themselves.” 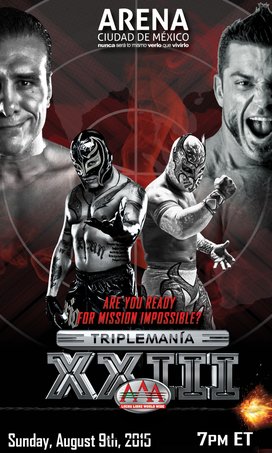 While Cage said he has had plenty of big matches over the course of his career, none have been to the magnitude of the bout with El Patron.

“I don’t want to take it for granted,” Cage said. “I think I realized how big and special this is. (The matches have) been pushed so heavily… The past six months have built up to this big moment. It’s awesome and I couldn’t be more stoked.”

When asked what’s next after the battle at TripleMania, Cage was to the point — nothing.

With Sunday’s pay-per-view being broadcast domestically and internationally, Mysterio said AAA now is able to back up the “worldwide” part of the company’s slogan — Lucha Libre World Wide. AAA also, according to Mysterio, signed “the three most important free wrestlers that were out there at the time,” in Myzteziz, El Patron (the former Alberto Del Rio) and himself. The show, Mysterio said, is an opportunity to educate American and Canadian fans about lucha libre and the fact that it is not only a style of wrestling, but embedded in Mexican culture.

“We’ve got to make sure that whatever goes down that night, Aug. 9, that we put on one incredible show for the fans that will be buying this pay-per-view,” Mysterio said. “The reason being is I want them to return. I want them to be able to, if AAA has the opportunity to display another pay-per-view via satellite, I want those fans to return and witness some more lucha libre.”

Mysterio said after nearly 20 years, lucha libre has never been showcased the way it is now, with legends in the ring and an opportunity to expose more of the culture.

“Some people think it’s just a spot fest and it’s not. We have a bunch of cool things… it’s definitely a different style, and there’s a hybrid-style developing,” Cage said.

And part of what Cage said adds to a AAA show is the atmosphere.

“The crowds there are just constantly making noise… (They’re) one of the most rowdy, vibrant crowds I’ve experienced in wrestling,” Cage said.

For more information or to purchase the pay-per-view, visit AAALucha.com.