Bob Steele could really rile up a crowd

It is an experience that any sports fan is familiar with. Two combatants fight it out tooth and nail with the difference being almost minuscule. Yet, just as the one you’ve been cheering for gets the advantage the referee makes a call that drives you completely up the wall. You start to wonder if the referee might not be honest and ethical. After all how could he/she make such a decision?

In professional wrestling, though, the referee taking certain victory from the fan favorite has been elevated to an art form. On July 24th, one of the best at riling crowds in British Columbia, Bruce “Bob” Steele, will be honored by All Star Wrestling at its Wrestle Reunion V show at the Alice McKay Building in Cloverdale, BC, along with Moondog Moretti, Don Leo Jonathan, and the late Roy McClarty.

Riling up the crowds was a blast.

“It was fun,” Steele recalled. “At the Vancouver Gardens we used to go in and out of the rink underneath the grandstand, there’s a walkway through there. I got more punches in the nose and kicks in the @$% going in and out of there than you can shake a stick at because I was a heel manager too. I was stuck in that dressing room one night until after 12:30 in the morning. I pulled a heel on the midgets and I booted the midgets’ valet … I didn’t hurt him or nothing. … I had a hard job to get to the dressing room then I had a hard job to get out of the building.”

As Neil Drummond explained, speaking on behalf of Mike Olsen and himself, Steele broke new ground in All Star Wrestling.

“All Star Wrestling had never had a heel referee before and Bob truly fit the bill,” said Drummond. “At first when a match was going slow, and was receiving no heat from the crowd, Bob would pull out his comb, and in the middle of the match comb his hair. He kept his hair immaculate. Every week whenever Bob would come out to ref his first match of the night fans chanted for him to comb his hair. He was very smart and would only do it if a spot was called or if the match was going slowly. It truly got the people going. He only did this once per night as he didn’t want to take any more heat away from the matches, especially the main events.” 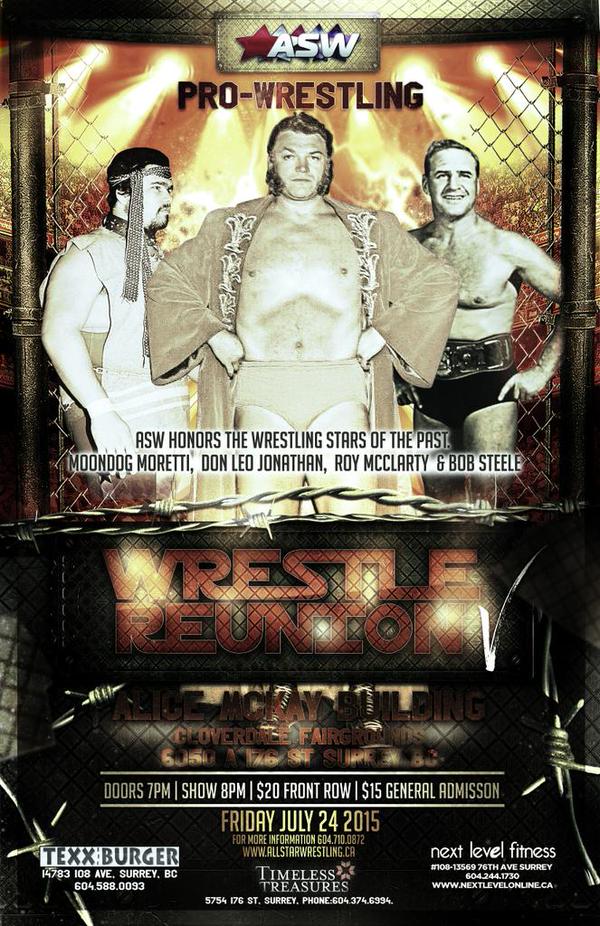 Steele would truly become a heel referee under promoter Al Tomko, who was still actively wrestling. Later, Tomko turned on Steele for a short feud.

According to Steele it was Roy McClarty who broke him as a referee. However, the origin for him becoming a heel referee was his own.

“I came up with the idea of the heel referee; I went against the good guy and kind of liked it,” remarked Steele. “The crowd roared and they hated me. I wasn’t constantly the heel referee. I could also be a heel and ten minutes later the people would cheer me. I would go against the heel and I would maybe dropkick him and then we would be booked. That was in B.C.; that was the only time I refereed and that was with All Star Wrestling.”

Steele’s time in All Star Wrestling only encompassed a part of his career in professional wrestling as he winded his way through many legendary territories before arriving in British Columbia in 1977.

“I am from Hamilton, Ontario, and grew up with the Tolos Brothers, John Quinn, Vic Rosettani, and Matt Gilmore. I started my wrestling in the early 1970s due to a friend that I worked with that used to wrestle,” recalled Steele. 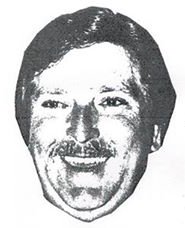 That friend, Mike Dockman, directed Steele — who worked at Stelco in Hamilton — to Benny Lima’s garage for further training. “He had a little bit of a ring there,” said Steele, who was 5-foot-9, 225 pounds at his best. He debuted in the early 1970s, using the name Bruce Kidd around Southern Ontario and into the northeastern U.S., an homage of sorts to the famed Bruce Kidd, academic, author, and athlete. He was also Seaman Bob Steele.

“We worked out after work on the mat and he liked my agility and ability to listen. He got me into a few small house shows in Northern Ontario. From there I was lucky enough to work for the Tunneys in Toronto … I worked with guys such as Sweet Daddy Siki, Tiger Jeet Singh, Love Brothers [Hartford & Reginald, Billy and Benny McGuire, the biggest twins in the world, and many others there. Then I went south and worked for Killer Kowalski and Bruno Sammartino.”

Though he was mainly used as enhancement talent, he said it was still old-school and kayfabe had to be kept, especially with Maple Leaf Wrestling, the NWA-affiliated promotion run by the Tunneys.

“A heel and a babyface never met on the street; if you got caught talking you were in trouble,” explained Steele. “You had to watch your step very closely with them; very professional, Frank Tunney and his [nephew] Jack. It was a very good experience.”

Steele would also work for the Rougeaus in Montreal, and the Vachon brothers, whom he described as pretty tough individuals. However, when asked what the most memorable feuds and wrestling matches were from his career there were a couple of West Coast names that immediately came to his mind.

“It was with Ed Moretti and Timothy Flowers,” Steele stated. 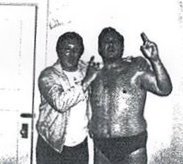 “With Timothy Flowers, we had lots of matches and there was lots of blood on my behalf. The people were really into it. That I’ll never forget. The most memorable match I ever had was with two people, at separate times, Abdullah the Butcher and his manager Bruce Swayze. That was in Cleveland, Ohio. Also, in Akron, Ohio, there was Johnny Valentine. Oh, he beat the hell out of me and I mean for real. It’s funny, the only thing I have left of my wrestling stuff is, I left my boots in Cleveland and he forgot his boots at home and Johnny Valentine was a big man. He wore my boots and ripped them open. I still have them.”

One former opponent who vividly remembers stepping in the squared circle with Steele is Kevin Jefferies.

“I had the rare opportunity of wrestling Bob Steele in a match back in the 1970s early 1980s in the Kerrisdale Arena in Vancouver,” Jefferies recalled. “I remember to this day the match as we were trading fisticuffs with each other, Bob, of course, was the heel, and I can say a damn good one as a wrestler and referee. There came a point in the ring when I swung a fist to his face and his false teeth came flying out of his mouth; hard for me as I was laughing so much and having to try and hide it from the fans. I remember one other time the same thing happened to Bob at the TV tapings in Burnaby as he was wrestling the great Sweet Daddy Siki; and lo and behold Siki throws a punch to the face, and Bob’s teeth once again fly across the ring. Without a doubt one of the best heel referees at that time on the west coast. He could get under the skin of the fans easy.” 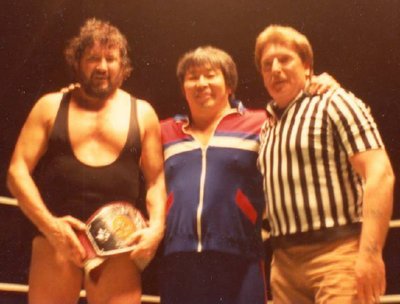 According to B.C. historians Neil Drummond and Mike Olsen, Steele made his debut with All Star Wrestling at a television taping that aired on December 9, 1978, where he wrestled against Sandor Novak in a losing effort. Steele would continue working for All Star Wrestling until 1983, but two years later he returned to British Columbia working under the Stampede Wrestling banner. However, that abruptly ended in 1986 when Stampede stopped running shows in B.C.

In “Vicious” Verne Siebert’s opinion the fact that All Star Wrestling is honoring Steele is a good thing.

“He was an underrated character and he was very good at what he did,” Siebert said. “He still looks the same as he did when I saw him back in the 1980s. I remember he would work with Larry Watts … one guy, a preliminary guy. For a short while he was a heel manager too. I think he managed Al Tomko. He was good because he played the role of the heel and got the crowd riled up. You don’t see that very often. He was very good getting the crowd to go over the top. Behind the scenes he was very helpful and funny.”

After his wrestling days Steele went into the construction industry. 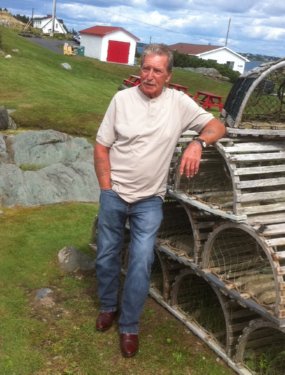 A recent photo of Bob Steele.

“I’m a crane operator and I still do that to this day,” Steele said proudly.

“In fact, I just got off work a few hours ago, but I don’t want to stop. It keeps you going and it’s something to do. I’m 70 years old, I’ll be 71 in October, but you’ve got to keep active. While I was with All Star Wrestling I met great guys and wrestled some of them — Eric Froelich, Al Tomko, Gerry Morrow, Ed Moretti, Kevin Jefferies, Timmy Flowers, Terry Adonis, Bruiser Costa, Moose Morowski, Dean Ho, and the list goes on. I still miss it and always will. I don’t do any refereeing anymore, but if you want to know the truth I would love to do it again for a special event and I might even talk to them when I go to All Star Wrestling on July 24th. I still keep in touch with Verne Siebert and Kevin Jefferies, though. I went to the last ASW Wrestle Reunion show in Cloverdale where they honored Erich Froelich and a few of the other guys and it was nice. The crowd was right there. Some of the same people are still coming. They’re pretty loyal and that’s what makes the wrestlers, when they come out there and see all these people and they either cheer you or boo you, you know you’re doing a good job. If they boo or clap you know you’ve got it made because they’re paying attention to you.”

Both fans and friends are looking forward to seeing Steele at Wrestle Reunion V. The planned presentation to him that night has made him reflect on his career.

“It’s an honour; I’m really happy about that and so is my family,” admitted Steele. “If I had to do it all over it would be different. Not 100% different, but there would be a lot of differences. I would work different, listen more, do more things, to try and get further ahead because there’s money in that racket. Once you get to WWE and places like that you can make a buck. They’re pretty high paid people there. The hard work is the boys in Cloverdale and little shows like that, trying to get going and working their @$%#@ off and all the sudden they get picked up. I do thank you for allowing me this honor and the promoters to invite me to this important event. I will say to all the young guys and girls that want to get into the business don’t give up work hard, listen to your teachers, and give it all you got, so that someday that will make you stars of wrestling.”