When most people think of ECW, bloody, brutal, vicious matches immediately come to mind. Those who didn’t follow the rise and fall of the notorious wrestling federation though have no idea that there was far more to ECW than hard-core mayhem. ECW was also the home to some of the best technical matches ever held in the squared circle. Such names as 2 Cold Scorpio, Malenko, Tajiri, Super Crazy and Lynn and more put on regular wrestling clinics during their time in ECW. 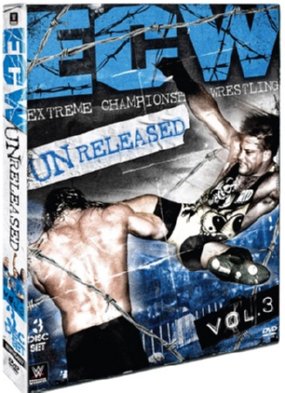 While focusing on many of the ECW mainstays like Sabu, The Dudley Boyz, Taz, Tommy Dreamer, Raven and Rob Vand Dam, the collection also puts the spotlight on some recognizable faces to those who may not remember the days of the Big Three. Ron Simmons faces off against Shane Douglas for the ECW World Heavyweight Championship while a number of matches feature Chris Jericho, Eddie Guerrero and Rey Mysterio. The best of the collection though are 2 Cold Scorpio and Dean Malenko taking on Eddie Guerrero and Taz as The Tazmaniac in an amazing tag team grudge match, an ECW Television Championship match pitting Chris Jericho versus Shane Douglas and Cactus Jack versus Sabu in a hysterical match scored according to Olympic wrestling rules by Joey Styles. It is a laugh riot and if you haven’t seen it, you should.

If all that wasn’t enough, the entire package is hosted by Joey Styles, forever the voice of ECW, and original members of the uproarious bWo (The Blue World Order), Stevie Richards and The Blue Meanie. The trio not only provide some great background, insight on the matches presented and ECW as a whole but are quite amusing on their own as they clown around to the point of mentioning that the very DVD they are promoting is probably available on a Torrent site somewhere. Funny stuff that. It is clearly a no-brainer to invite them all back if there is a fourth set.

Fans shouldn’t put much stock in the title though. Of the 20 or so matches on the three DVDs, only five are from house shows and technically “unreleased.” The rest are from Hard-core TV, pay-per-views and ECW on TNN. Nevertheless, this, the latest installment in the ECW Unreleased series, is a terrific tribute to the revolutionary federation that changed the course of professional wrestling like no other has since.

EDITOR’S NOTE: SLAM! Wrestling’s Marshall Ward conducted a chat with The Blue Meanie about his participation in this DVD. Here’s Part One of the Q&A, and here’s Part Two.