Fresh off his first full tour in Japan, NWA’s Chase Owens will cross the border into Canada for a five-day run with Canadian Wrestling’s Elite.

Owens competed in the Best of the Super Juniors tour with New Japan Pro Wrestling, facing notable opponents such as Jushin “Thunder” Liger and main eventing in the famed Korakuen Hall against Ryusuke Taguchi.

“New Japan is where the best pure wrestlers are, I believe … the best junior heavyweights from around the world, (and it) was definitely an honor and to pick up several of the big wins that I did were definitely career highlights for myself,” Owens said. 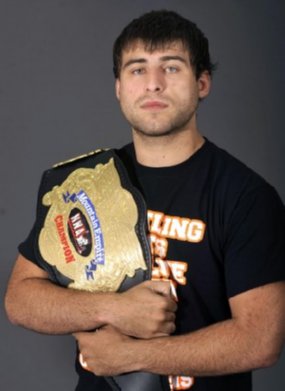 Owens secured victories over the likes of Gedo and Liger despite not winning the tournament itself. He said “the atmosphere as a whole” was different during his time in overseas.

“It’s really a different experience than it is here, a different style of wrestling,” Owens said on Tuesday. “When you face the best, you can only get better, and I’ve actually had several people say that I’ve — just this past week in our match — that I looked better than before I left for Japan.”

The former NWA junior heavyweight champion’s biggest take away from nearly three weeks in Japan was simply being around a different ring style.

“It’s more strong-style, Japanese-style type of wrestling than the American. And to be able to do different styles of wrestling will definitely help down the road,” Owens said.

And that assistance could come as soon as June 22, when CWE’s Fear Factor tour begins in Steinbach, Manitoba. Owens said CWE is a favorite promotion of his.

“It’s getting the exposure in Canada, where I’m becoming more international with going to Japan, going to Canada, next month in July I’m going to China,” Owens said. “So to work different places is always great. Then I’ve got several big matches, wrestling five days in a row. For me, this tour is all big matches.” 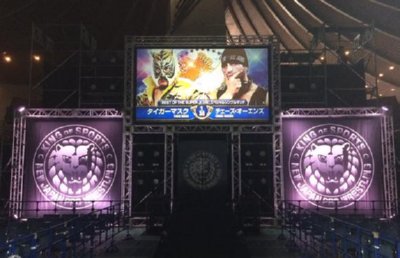 Chase Owens on the big screen in Japan.

Danny Warren, of CWE, said Owens debuted with the company last July and “instantly made the entire locker room step up their game.”

“He was, by far, one of the most popular performers on the tour and set the bar very high with some of the best matches in company history his first week in,” Warren said. “It was a no-brainer he was a keeper.”

Warren, who under his in-ring name Danny Duggan also has worked in the ring with Owens, said the NWA star “has a very lost and rare trait of being an incredible ring general.”

“Each and every person he gets in the ring with has a better match than they are probably capable of because of Chase’s natural abilities in the ring and understanding of the business,” Warren said.

Owens will face off against former WWE star Justin Gabriel at the Winnipeg show June 26.

“(That show will be) the biggest show on the tour, so I’m really looking forward to competing with a guy as athletic and as well-traveled as Justin Gabriel,” Owens said.

The two will meet for the first time on the Fear Factor tour. Gabriel said “one of the cool things” about now wrestling on the independent circuit is facing new opponents and trying to make the matches memorable.

“Working with people I haven’t worked with, for me, that’s a huge challenge,” Gabriel said. 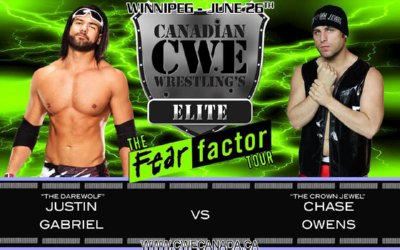 Gabriel said fans who might not be familiar with CWE can expect a “phenomenal” show. And for himself, he said his energy is “10 times more than it’s ever been.”

Owens also will wrestle Shane Sabre, who he has previously only faced in a tag-team scenario. Sabre’s competitive nature and how their styles would mesh could “bring something special to the CWE fans,” according to Owens.

“When we had our tag match, I really thought he was real talented and so after that tour, I actually asked the CWE office for a one-on-one match,” Owens said.

Warren said fans can expect a match that would “steal the show on any of the biggest indy darling promotions on the continent right now.”

“You can expect that those that see it will become very familiar with Shane Sabre and a big fan, as Chase Owens will bring out the very best in him — win, lose or draw,” Warren said.

For more information on the Fear Factor tour, visit CWECanada.net.