The Bull of the Woods. Ulvalde Slim. The Midnight Rider. The American Dream. No matter what you called him, he was one of, if not the most charismatic personalities to ever grace the business called professional wrestling.

His real name was Virgil Riley Runnels, Jr. and the odd thing was, during an era when most wrestlers kept their true identities a secret, he never did that. In fact, he was one of the very few who knew how to tell his story by revealing the humble beginnings of Virgil Reily Runnels, Jr., as the son of a plumber, and how he became “The American Dream” Dusty Rhodes. 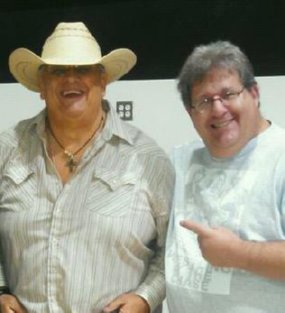 Perhaps one of my closest friends, Sheldon Goldberg, said it best the other day. “To this industry he was so much more than ‘The American Dream,’ he was and will always be, an American treasure.” After all, how many people can claim to supposedly have a series of match endings named after them?

When I received the news of Dusty’s passing on Thursday, at first I was shocked, then I was overcome with a deep sadness, and finally it just tore me up. I was devastated… absolutely heartbroken.

I can’t tell you how many times I sat down to write something, but couldn’t bring myself to it, until now. All I could manage was a few words of sympathy for the Runnels family and a cropped photo of he and I.

While Dusty and I hadn’t been close in a long time, we were still friends. We were very close while I worked with him on his book and when he worked at TNA. But after he went back to WWE, the combination of his work schedule and mine limited our contact. Phone calls became few and far between — maybe only once or twice a year — and texts were only exchanged around the holidays. Our last text exchange was on May 13th and the last time I actually saw him was at an NXT event in Fort Pierce in September 2012; we hugged, we talked and he looked great. It was like old times… much different than the very first few times we crossed paths.

It was circa 1987 and Jim Crockett Promotions was running a pre-Starrcade show at the West Palm Beach Auditorium. I was at the back of the arena near the entranceway when Dusty came out, larger than life, looked around the crowd to see what the attendance was, and all I could muster was, “Hey, how are you?” He briefly glanced my way and went back inside the locker room.

Then a fan came up and asked one of the security guards, “Is Dusty Rhodes eating?”

“What?” a security guard asked.

“Is he eating? He must be eating ’cause he looks so fat.”

A smile quickly came to my face for the guy who just snubbed me.

About six months later JCP did a show in Miami at the James L. Knight Center. It was the very first Wednesday night live broadcast on TBS called “Miami Mayhem.” Danny Miller, who was the event coordinator for the show, and who had allowed me full access as a photographer, told me that no matter what happened that night to stay off the third floor (where the dressing rooms were) as Jim Crockett, the TV production people, etc., would be all over the place and I’d end up getting in someone’s way. Well, toward the end of the show, I took the backstage elevator from the fourth floor (where the arena was) and pressed “1.” The elevator made an unscheduled stop at “3.” The doors opened and there was Danny straight ahead. To his right was Dusty, to his left was Crockett and the two of them were literally screaming at each other. And here I was right smack in the middle of it. The two of them looked at me and all I could say was “Hey, how you doing?” I pressed “1” again, the doors closed, and I got the hell out of there as fast as I could.

A year-and-a-half later Dusty was the co-owner of the PWF and the late, great Gordon Solie had asked me to do some last-minute publicity to help them sell tickets for their Knight Center show as their ticket sales were pretty soft. I called in a few favors around town, pulled some strings, and had Dusty on a half a dozen radio stations the day of the show to promote it. The night of the show I was invited backstage by Gordon to finally meet the Dream when he suddenly he made his appearance from the stairwell. “Hey, how are you doing?” I asked, extending my hand. He walked right past me, looked into the arena to see how the crowd was, then turned around and walked past me a second time, and walked back downstairs to the third floor. He didn’t say a word. Needless to say I was pretty pissed off at him and when I called Gordon (who stayed in Tampa) to tell him what happened, all he could do was apologize for his partner.

I didn’t cross paths with Dusty again until 1998 when I picked up the phone and called him to invite him to participate in the NWA 50th Anniversary celebration in Cherry Hill, New Jersey. He finally spoke to me, but I was promptly turned down. We didn’t speak again until 2000, when I began running shows at the Fort Homer W. Hesterly Armory in Tampa, the building that he used to book and that many people believe, including yours truly, that he helped to create that magic the building had. I contacted Dusty to work with me and on no uncertain terms he said no. He said I would fail miserably and that eventually he would be able to just walk into the building himself to take it over. He was wrong as that never happened. But, hell, at least he was honest about his intentions.

However, running that building regularly, with all the history that was in there, much of it that he wrote himself, somehow changed Dusty’s perspective of who I was and what I was capable of. Even though I had an exclusive there, I offered to let him run his Turnbuckle Championship Wrestling at the building too. But instead of taking me up on the offer, he said, “No, that’s your building now. If I do anything in there, it’s going to be with you.” We talked about doing some joint venture shows, but they never really materialized. The closest we came was when Dusty hired me to promote a couple of towns for him in central and northern Florida, where he used a lot of my guys on the undercard.

But then the moment came where we went from being friendly to being friends and it was all about respecting him and his company.

Dusty ran a spot show in Ocoee, Florida and hired me for a flat fee to promote it. The show simply did not draw well, despite a hefty advertising budget. At the end of the night after he gave everyone their payoff, he handed me an envelope.

I took it, opened it, counted it and put the money back in the envelope. “Yep, just what you promised.” And with that I handed the envelope back to him. “I can’t take this money, Dusty. How can I take money from you when you lost money tonight?”

Dusty was moved by the gesture and from that point forward our bond got nothing but stronger.

Not only did he make one of my dreams come true by allowing me to write his book, which I also have to thank Alex Marvez for this as he stepped out of the picture so I could step in, which in turn enabled me to talk to the late New York Yankees owner George Steinbrenner one-on-one who wrote the foreword, but it opened the door for me to later write Swimming with Piranhas.

But that’s not the only door the original “Stardust” opened for me. When he worked for TNA he introduced me to Dixie Carter and tried to get me a job selling sponsorships. Then when I got displaced from Bank of America in 2009 due to the BOA-Countrywide Mortgage merger, Dusty went to bat for me and tried getting me a job with him in WWE creative. Even though those two opportunities didn’t pan out, Dusty watched out for me, something he often did for those who he trusted and had his back.

There are many stories I can tell about Dusty and some I can’t, but my absolute favorites are usually the ones where he acted very, very silly or when I got to see and be with Virgil Runnels rather than be with Dusty Rhodes. And make no mistake about it Dusty and Virgil were not always one in the same. Sometimes they were, but not always. While at times Dusty the over-the-top boisterous character would overshadow Virgil the person, it was Virgil who was the proud, loyal, dedicated and humble — yes I actually said humble — family man.

Without a doubt Dusty is the most imitated man in pro wrestling dressing rooms from coast to coast and border to border, although some would argue Hulk Hogan is right up there, brother. But just the mere mention of “The American Dream,” gets wrasslers all riled up in a very funky like a monkey way, gets ’em talkin’ with an obvious lisp and has ’em sayin’ things that usually include a reference to “hard times” or Terry Funk being an egg-sucking dog, alive and in public if you weeeelll!

Before he broke out on the scene, there was never anyone like Dusty Rhodes before him and God knows, there will never be another one like him again. He may be imitated, but he can never be duplicated. He was a one-of-a-kind sports entertainer before the phrase was ever coined and thanks to technology, we and those who come after us will be able to experience forever just a little bit of the magic that we got to see firsthand.

Dusty, like so many others who have said these two words to you this past week, “Thank you!” And while you’re up there sharing some road stories and having a beer or three with Hoyt and Frank and Eddie and Mike, be sure to say hello to Hiro, Gordon, Hump, Gary, Jimmy, Billy, Brady, Hawk, Herc, Al, George, Dennis and the Professor for me.

Life is a dream, but you, my friend, really were an American Treasure.