TORONTO – Ring of Honor Wrestling and New Japan Wrestling presented Global Wars ’15 pay-per view from the Ted Reeve Arena in Toronto, on Friday night. The action witnessed in the ring was scintillating and the sold out, standing-room only crowd was rowdy from start to finish. To put it mildly, this was a wild night of professional wrestling.

“It is important for New Japan to be in Toronto,” said Yujiro Kushida in an interview with SLAM! Wrestling. “This makes New Japan bigger.”

Starting off the evening was a dark match featuring the eccentric Dalton Castle taking on Donovan Dijak. Both wrestlers worked hard to light up the crowd. Castle won the bout with a belly-to-back suplex into a bridge. Dijak sold moves like a big man. 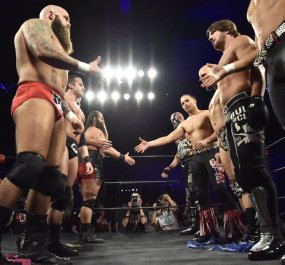 It’s the calm before the storm as the Ring of Honor members shake hands with New Japan’s Tokyo Bullet Club before the main event. Photos by Mike Mastrandrea

The crowd was abuzz about not only seeing their favourite Ring of Honor stars but also for the New Japan wrestlers they might not have ever seen live.

When the main show began the crowd became totally unglued. Moose and Gedo defeated Silas Young and Takaaki Watanabe in a match that highlighted the power of Moose.

Chris Sabin took on Yujiro Kushida and Kyle O’Reilly in a three-way match. Pacing and storytelling were the hallmarks of this outing. All three individuals held a clinic of reversals and high-impact moves. In the end, Kushida made Sabin tap out to a behind the back arm bar.

Michael Bennett and Matt Taven took on Matt Sydal and the legendary Jushin Thunder Liger. Liger played to the crowd and proved that using your head is very beneficial in any match. Perhaps this was most evident when Maria Kanellis grabbed Liger’s head and rubbed his face in her ample cleavage.

Near the end of the match Matt Sydal was in mid-air, trying to complete a 360 splash, when Taven kicked the former WWE star in the head. The impact was the game changer as The Kingdom went on to victory.

Cedric Alexander took on New Japan sensation Kazuchika Okada. Okada’s charisma and crisp moves had the crowd mesmerized. The match was even, with both men gaining control for periods of time. The Rainmaker hit Alexander with a piledriver for the three count. During the match there were some lighting issues but it did not affect the quality of work in the ring.

In a three-way tag team match, The Addiction faced Ring of Honor tag team champions RPG Vice and The Decade. The match was really well organized, staged and the referee kept control of the ring. B.J. Whitmer was pinned by Kazarian.

The crowd really lost their minds cheering for ACH and Shinsuke Nakamura. The crowd went back and forth cheering for both men. Nakamura hit ACH with a spinning heel kick and got the pin. Nakamura’s poise was impressive.

After the match Watanabe couldn’t help but do a little boasting.

Jay Lethal and Tetsuya Naito put on their wings and flew around the ring in their bout. The athleticism of both athletes was a sight to behold. About halfway through the match, the referee caught Donovan Dijack interfering and sent him to the back. With the odds even, the crowd was given a clinic on how to present high-flying matches that tell a story. Lethal eventually defeated Naito by pinfall.

Michael Elgin against Hiroshi Tanahashi was a disappointing match. The crowd loved Elgin coming to the ring draped in Canada’s flag. From there the match seemed to be a step behind. This is not to say that it wasn’t enjoyable to watch but compared to the quality of matches already witnessed, this one was a letdown. One impressive sequence had Tanahashi crossbody block Elgin, but the Canadian rolled through the move.

From the ground, Elgin picked up his opponent across his shoulders. Tanahashi later hit Elgin with a crossbody onto the floor. The unexpected move chased the crowd out of their chairs. When the match made it back into the ring Tanahashi hit another bodyblock and got the win. 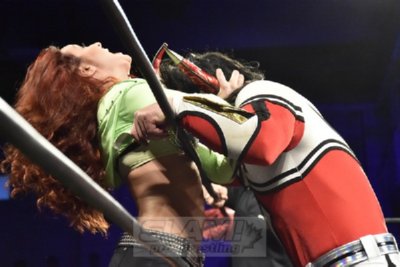 The main event saw New Japan’s Bullet Club, comprised of the Young Bucks, Karl Anderson, Doc Gallows and AJ Styles, battling the Ring of Honor All-Stars: Roderick Strong, the Briscoes, and War Machine. The crowd was awash in Bullet Club merchandise and yet it cheered both groups evenly.

The fast-paced action and death-defying moves made it hard to pick just one or two highlights. Perhaps one of the most unique guys in the match was Hanson. He would cartwheel out of the way of oncoming opponents and then hit them at angles that staggered the opposition. Hanson also performed a flip off of the top turnbuckle onto both teams outside of the ring. Roderick Strong hit one superplex after another taking out the competition. Jay Briscoe hit one of the Young Bucks with a piledriver and scored the win.

After the match, Jay Lethal attacked AJ Styles and Jay Briscoe with his TV title belt. Both men later rallied to disposes of Lethal.

This was by far the best house show I have seen in a long time. The WWE will have a difficult time topping this show when they return to town this fall.

Caleb Smith would like to thank the guard who suggested he have a business card in order to seem more professional. He will take that advice and try to figure out how he interviewed so many wrestlers without one. Thanks to Derek and Kerry for coming to the show.