Hall of Fame induction a Perfect night with a Model ending 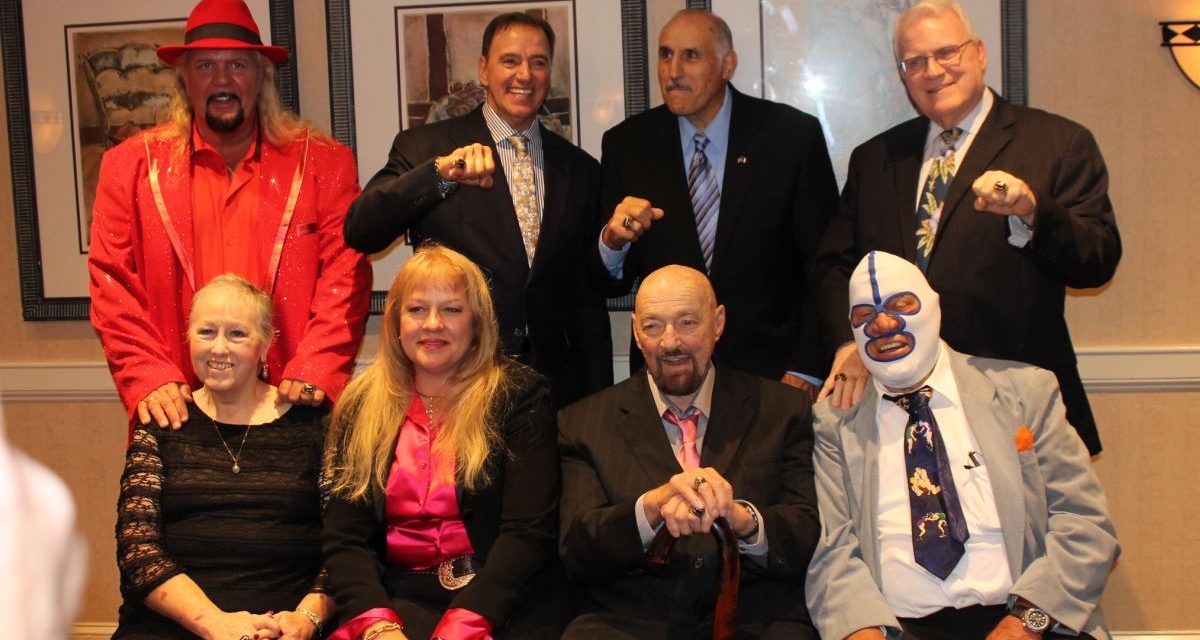 JOHNSTOWN, NY – The 14th annual Pro Wrestling Hall of Fame induction ceremony had a hint of Arrogance, was a little Purely Sexy, and was Perfect in many ways.

For those not necessarily in the loop on nicknames, the final three honourees were Rick “The Model” Martel — who was the opposite of arrogant with his speech; Michael “P.S.” Hayes, who went into the tag team division with his deceased brothers from the Fabulous Freebirds, Buddy “Jack” Roberts and Terry “Bam Bam” Gordy; and WWE superstar Curtis Axel, who inducted his late father “Mr. Perfect” Curt Hennig. 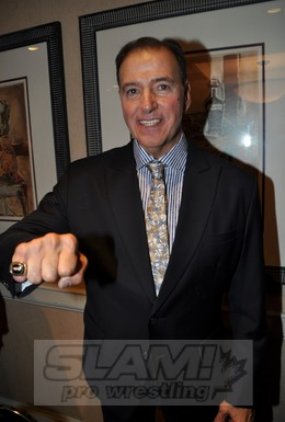 The last honouree of the Saturday night event at the Holiday Inn, in Johnstown, was Martel. “Leaping” Lanny Poffo introduced Martel, reading a little poem. “How do say ‘hero’ in French?” he asked.

Martel referred to Poffo as “mon frere” — my brother — and was both enthusiastic and emotional.

“It is so special because I am being inducted because my peers, because the wrestling historians decided that I earned that right,” said the former AWA World champion. “I am very honored and very humbled to be among such great Hall of Famers.”

Martel got to visit the Pro Wrestling Hall of Fame in nearby Amsterdam earlier in the day and really raved about it and the work put in by President Tony Vellano and his many volunteers.

“We have a physical place we can bring our family to show what professional wrestling is all about,” said Martel, turning his attention to his own family.

“I have to share this honour with my brother, Michel, who got me started in professional wrestling. Michel was my mentor and my best friend,” said Rick of Michel, who died in Puerto Rico in 1978 after a match. “I hope that he is proud of me, wherever he is.”

After a 25-year career, Martel talked about the void in his life that wrestling left. But he and his wife, Joanne, filled it with a daughter, Coralie. “When our daughter Coralie entered our lives she filled that void,” he said, getting a hug when he finished. “I love you so much. You’re the sunshine of my life”

Family was also a theme for the Freebirds, as the widow of Terry Gordy, Connie, was at the podium with Brandon Hey, son of Buddy Roberts, and Hayes. Hey thanked the fans, and pointed out that today would have been Buddy Roberts’ birthday. “Happy birthday, Dad! This is a great present for him.” 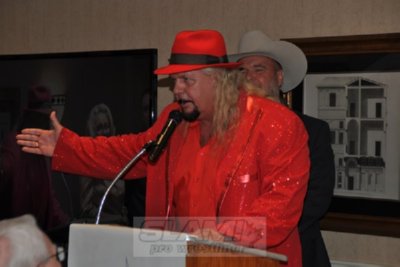 Michael Hayes is demonstrative during his speech, as Cowboy Johnny Mantell looks on.

Hayes addressed his day job with WWE, how it’s always full-speed ahead. “I needed to go back” to his olden days he said, talking about how protective the wrestling business once was.

“Somehow the three of us became family. We took different paths into the business but all were very similar,” he recalled. “Without Buddy and Terry, I would never had gotten to live my dream.”

Of course, being Hayes and the Freebirds, he then started to tell some “nightmares” of life as a ‘Bird — physically destroying a home, drinking, dealing with the over-enthusiastic Von Erichs

“I can’t take any of that back. I would surely advise people not to live like we did,” he concluded.

By far the biggest current name in attendance, Curtis Axel was humble and appreciative of his father, Curt Hennig. He talked about how, despite all the road trips his father went on for wrestling, that he always seemed to be there for important games and events. With three kids of his own now, Joe Hennig is trying to live up to the example his father set — in and out of the ring.

Just when it appeared Axel was done, he asked for the applause to stop and he brought out a letter to read. It was the eulogy that his grandfather, Larry “The Axe” Hennig had written for Curt’s funeral in 2003. 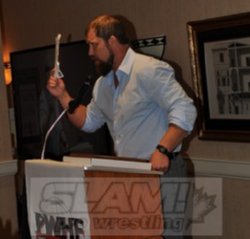 Joe Hennig holds up a letter from his grandfather, Larry Hennig.

“In whatever way you do it, say a little prayer for Pedro,” he said. “Pedro can’t be here. He’s very, very sick.”

Switching gears, O’Hannon talked about life with Pedro, which was always fun.

“Pedro was a fiery guy,” he said. “He lived every day like it was his last.”

“The guys who knew him, whoopa baby, whoopa baby,” O’Hannon chuckled, shaking his head and explaining that you knew not to go partying with him if you needed to be somewhere the next day.

A headliner virtually anywhere he wrestled, Morales “did the business the right way.”

O’Hannon promised to deliver Morales the plaque, as he has been in and out of hospital “It’s very, very tentative. It’s not going to have a good outcome.” 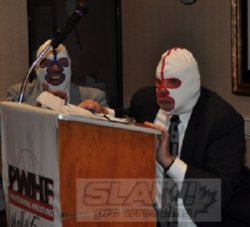 The emcee was Dave Drason Burzynski, who was Detroit manager “Supermouth” Dave Drason. He kept the evening moving, with a combination of humour — his rib on The Destroyer about perhaps being his father was pretty funny — and humility. His final contribution was to ask all of the wrestlers, managers and promoters to salute the fans with a round of applause.

Earlier in the night, a number of awards were presented posthumously.

In the Pioneer Era, The Great Gama (Ghulum Mohammed) was introduced by this writer. Through his stardom in India and briefly in Europe, Gama opened the doors for India to be a lucrative place for North American wrestlers, like Lou Thesz and Paul “The Butcher” Vachon.

John Panzone, the great-grand-nephew of “The Utica Panther” Joe Malcewicz was thrilled that his forefather was being inducted. “He was a forgotten man” for many years in his own hometown of Utica, NY, despite his fame abroad as a wrestler in the 1920s and 1930s. Later he was a promoter in San Francisco with his brother, Frank. With this new recognition, Panzone is happy that Joe Malcewicz would not be forgotten as the second inductee into the Pioneer Era.

The Destroyer (Dick Beyer) had a hand in training Jumbo Tsuruta, and wrestled him countless times in Japan. Reflecting on his friend, he stressed that Jumbo, a former AWA World champion, among other honours, was meant for stardom. “He was a main eventer from the start.”

In the Colleague Division, Jim Crockett Sr. was the chosen one. Selected to induct him was J.J. Dillon, who was fortunate to get one of his early wrestling breaks in the Charlotte territory that Crockett ran. Dillon described Crockett as Burl Ives-like, “the epitome of the Southern gentleman” that everyone called Mr. Crockett. There were a number of interesting anecdotes that Dillon shared, including how Mr. Crockett would watch the matches and, if he felt the match was going long and needed to end, he would start flipping his tie. Another was how Crockett facilitated Dillon’s first trip to the Maritimes to wrestle by peeling out $640 in cash from his pocket to front for a plane ticket from Charlotte to Halifax.

The Halifax reference would be appropriate for the next inductee, Whipper Billy Watson, who was a Canadian legend and is in the Television Era category. Ross Hart talked about the legend of The Whip, “this name is synonymous with wrestling … from Vancouver to Halifax,” he said, adding a tale of meeting a humble Watson in 1984 when he came out to Calgary to visit with his old friend Stu Hart. Another son of Stu, Bruce Hart, called Whipper “a tremendous ambassador” and “one of the great citizens of our sport” for all his charitable works outside of wrestling, where he was a two-time world champion.

Another Canadian was up next, in the Women’s Category — Vivian Vachon. Inducting her was her brother, Paul “The Butcher” Vachon and her son, Ian Carnegie.

After an off-tangent story — a common theme any time wrestlers get near a microphone without a hook nearby — Vachon talked about his sister, who became “one of the most famous lady wrestlers in the world.” Butcher and “Mad Dog” Vachon are already both in the PWHF, and their sister, Diane, makes three — “It gives my heart such pride” admitted Vachon, turning the mic over to his nephew.

Carnegie, a big man who served in the Canadian Armed Forces and is a competitive arm wrestler, is a deadringer for a Vachon with his size, shaved head, and beard — and just as a natural storyteller.

“This is very overwhelming for me,” he began, explaining that “I only knew her as my mother.” Diane Vachon — Vivian “The Wrestling Queen” — died when he was only 11 years old, when she and his sister were killed by a drunk driver in a car accident.

After the softer stuff, Carnegie began the tales. There was a story about Luna and his mother having an impromptu match where he overreacted, crying at ringside, and another about seeing Mad Dog beaten and bloody, and Uncle Paul convincing him it was ketchup.

He also confessed that whenever he faces adversity, he thinks of how his mother would have faced it — one story had his mother knocking out someone who assaulted her — “I know I could do it, because she is me and I am her.”

Greg Oliver would like to thank the lovely and talented Pamela Morrison for her editing skills and headline writing. Her skills are wasted in the banking industry.