Many of WWE’s books through the years have been a visual feast, where the great artwork, funky design and fabulous photos often supersede the text. That’s certainly the case with the just-released WWE Ultimate Superstar Guide. The man behind the superhero-like drawings is Daz Tibbles, and he shared a little about the project in a special question and answer session.

Darren “Daz” Tibbles is an English-born artist who now calls Australia home. He worked in the gaming industry for years, but is now plying his trade doing both digital and traditional art. 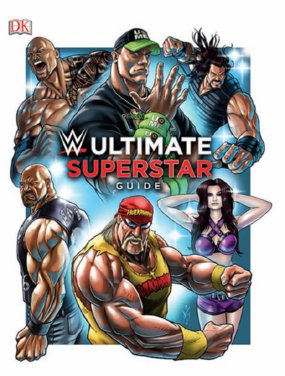 The questions were compiled by the father-son team of Greg Oliver (age 44) and Quinn Oliver (age 8), since WWE Ultimate Superstar Guide is aimed at a younger set.

SLAM! Wrestling: How did you hook up with WWE Books / DK Publishing for WWE Ultimate Superstar Guide?

DAZ TIBBLES: I was approached by DK after they saw some of my wrestling images on Deviant art.

SLAM! Wrestling: Wrestlers are almost real-life superheroes. Are they fun to draw?

DAZ TIBBLES: Yes it’s fun to draw them. Like you said they are like real-life superheroes and I really wanted to play that up in terms of the designs and give them more of a comic book look to them.

SLAM! Wrestling: Kevin Owens talked about the book on NXT, and pointed out that it’s funny that Sami Zayn is on a facing page to Ryback, and they both have similar physiques. He said that was ridiculous. Is it hard to draw to scale? Do you maybe over-build or under-build people sometimes?

DAZ TIBBLES: Each character I did was done as a stand-alone image with the exception of a few like the the Road Warriors or Bushwhackers, which I made sure lined up physically. My aim was to make each one as cool as possible, and I didn’t know the layout so I didn’t know who would be sharing pages. My style has always had a OTT style so, yeah, I tend to make my characters either super big or thin and ripped.

SLAM! Wrestling: Did you get a say over which wrestlers were in the book?

DAZ TIBBLES: No, the WWE had a list of superstars that were going to be featured and I would get lists throughout the process so I didn’t even know the full roster until I had almost finished.

SLAM! Wrestling: Which was your favourite to draw?

DAZ TIBBLES: I have a few. Hulk Hogan was the first I completed and I really enjoyed drawing him as he was my favourite as I was growing up. I also enjoyed doing Roman Reigns, The Undertaker and Dean Ambrose too. 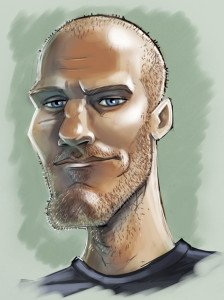 SLAM! Wrestling: Who do you wish would have been in there?

DAZ TIBBLES: I would have liked to have done CM Punk and Jeff Hardy. Both those guys have great looks and would have been fun to do.

SLAM! Wrestling: There’s a combination of posed and action — is one easier to draw than the other?

DAZ TIBBLES: It depends really. Sometimes I just get a really clear idea before I even start to draw. Other times I have to do a lot of sketches to get it right (or close to right). I like dynamic poses so they are easier just because they are more fun.

SLAM! Wrestling: Related to the action, which came first, the description of the action (Hulk’s T-shirt rip or Reigns’ Superman punch) and therefore your instruction to draw it, or your drawing, which they added the description to?

DAZ TIBBLES: I was given some call outs with each list of superstars highlighting certain things about them. So I had to incorporate that into each picture. Most of the time this was pretty simple because they are mainly visual elements or particular characters outfit. 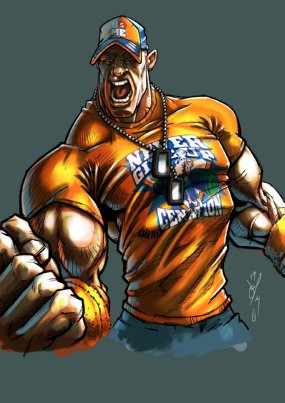 An early sketch that Daz Tibbles did of John Cena.

SLAM! Wrestling: What source material(s) were you using to do your drawings?

DAZ TIBBLES: Google image is every artist’s best friend. Occasionally WWE would provide some reference if there was a specific element that was needed like a certain T-shirt or prop.

SLAM! Wrestling: What other projects would wrestling fans be interested in that you are doing?

DAZ TIBBLES: I don’t have any wrestling projects lined up but hope to work with the WWE again at some point. We’ll have to wait and see.

GREG and QUINN OLIVER are the father/son team behind the book Duck With the Puck, which received this praise from Don Cherry: “You described how I felt as a young boy. I could hardly wait for the ice to freeze. Great job! You will follow your Dad with books.”